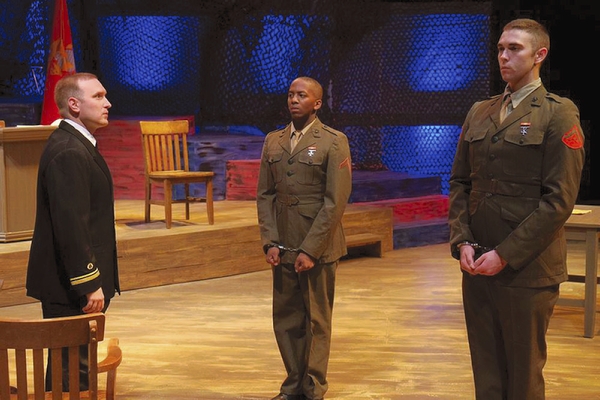 The play is directed by Craig Kolkebeck, assistant directed and stage managed by Lara Williams.

From the writer who created The Social Network and The West Wing, Lee Street theatre will bring you this intense drama in which military lawyer Lt. Daniel Kaffee defends Marines accused of murder. After its success on Broadway in 1989, the movie version of this play was nominated for four Academy Awards including Best Picture.

Lee Street theatre’s production of A Few Good Men is constructed with strong-willed community members dedicated to putting on a show that tells a compelling story. This cast has endured weeks of morning workouts, memorizing choreographed marches and switching over to a healthier eating life style. These tasks have bonded this group of men, morphing them into a true ensemble.

This fast-paced drama showcases a truly awesome ensemble that includes both familiar faces and new performers to the Salisbury community. Many will recognize Bob Paolino who portrays the popular role of Colonel Nathan Jessep, originally played by Jack Nicholson in the movie version. When asked how to prepare for such an iconic role, Paolino noted, “It is always a challenge to do a role that people associate a famous actor with. I think the stye of presentation we are developing for this production will really captivate audiences.”

This experience has truly impacted this group of hard working performers by allowing them to take away valuable lessons. “It is no longer about me, it is about all of us,” says Jon Planovsy. Chuck Riodran hopes that “the audience can take away just how dedicated our men and women of the armed services are to their jobs.”

Of course, all of this has come together under the direction and leadership of the show director Craig Kolkebeck, who brought a very specific vision to this production: “I think the play poses a very unique question that’s blanketed under the guise of a military scenario. That is, in giving ourselves over to the laws of the country, state, cities in which we live, we place our trust in the officials we’ve elected, and rely on them to make the right decisions for our protection and way of life. However, how often do we question the matters and morality in the ways they do it?”

Performances will be at the Lee Street Theatre and Performing Arts Center at the Tom and Martha Smith Event Center, 329 N. Lee St. Get tickets online at www.leestreet.org or by calling 704-310-5507.

Audiences should be aware that this show contains adult language.