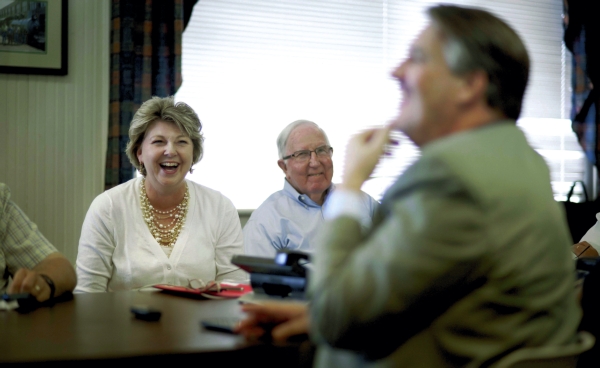 JON C. LAKEY / SALISBURY POST Kelly Alexander, left, the new director of the N.C. Transportation Museum in Spencer, reacts on Wednesday to the interim director, Dr. Kevin Cherry's, comments about expectations that she would be wearing costumes during public events. Cherry, right, was known to dress up as a conductor during Thomas the Train and Polar Express events.

Alexander began working at the museum about 27 years ago, as a part-time employee, while attending Catawba College. She started as an interpreter at the museum while studying at Catawba. Prior to Wednesday, Alexander was the chief operating officer for the N.C. Transportation Museum Foundation, which partially serves as the fundraising arm of the facility.

While announcing Alexander’s appointment on Wednesday, Kluttz joked that Alexander has served in just about every role and done every task at the museum.

“I have been told she’s done every single job here except, maybe, crawling under a train to repair it,” Kluttz said. “And, she’d probably do that if someone would hand her the directions.”

During the announcement, Alexander mentioned mowing the grass as another task she hasn’t yet done.

“I’m a hands-on person and I also believe in thinking outside of the box,” Alexander said. “That’s what it’s going to take and we are going to keep growing.”

Kluttz introduced Alexander to a packed meeting room, before a board meeting. Kluttz called the announcement the sign of a “new day” at the Transportation Museum.

“Her resume just goes on and on with wonderful things, but, I think, most importantly is the dedication she has shown,” Kluttz said about Alexander. “Wonderful things are going to happen at this museum.”

But Alexander’s railroad roots run deeper than the museum.

Alexander’s grandfather moved from Stanly County to the Spencer area in 1911 to work on the railroad. Her uncles were also engineers for Southern Railroad, which owned the property when it served as the company’s Spencer Shops.

As a child, Alexander said the facility was mostly dormant. However, her uncles and family members frequently talked about their work for the railroad.

“They always thought very fondly of the railroad, and talked about how it had provided a good life for them,” Alexander said.

During the announcement Kluttz noted that the N.C. Transportation Museum was instrumental in providing funding for the facility, when state funding dwindled. She noted Alexander’s role in increasing the museum’s budget from $500,000 to $2 million and a greater integration of the museum and its foundation, through Alexander’s two job titles, as a positive.

Kluttz said Gov. Pat McCrory’s proposed $3 billion bond package could further help the museum’s budget and improve its facilities. A total of $15 million is set aside in the bond package for the N.C. Transportation Museum. The $15 million includes renovations, an outdoor events space, offices, a hands-on children’s exhibit, a playground and floor replacements. McCrory has toured the state touting the benefits of the bond package, which wouldn’t require a tax increase.

However, the N.C. General Assembly, which would need to approve the bond package, hasn’t extensively discussed or passed the measure. If passed, it could be placed on ballots in November.

Alexander’s appointment as executive director marks the end of a one and a half year period where Cultural Resources Deputy Secretary Kevin Cherry served as interim director. The last permanent director was Sam Wegner, who resigned at the end of 2012 after nine months on the job. Larry Neal then served through 2013 as interim before Cherry was picked.

“The future is looking bright for the museum,” Alexander said. “We have many exciting projects in process and additional ones in the planning stages. There are numerous events planned throughout the year that will bring thousands of visitors to the museum. With everyone working together, we will see the museum continue to grow in economic impact and, at the same time, save an important part of our industrial heritage.”