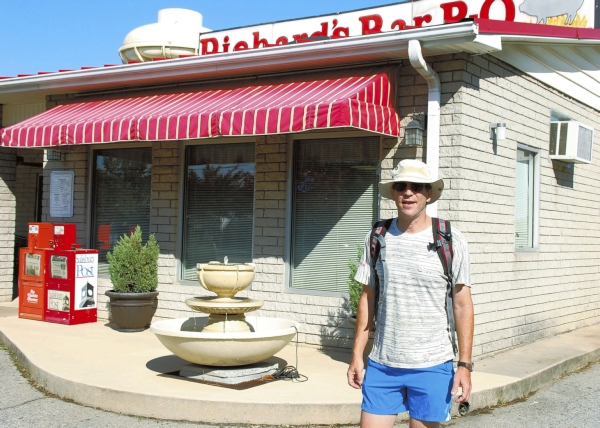 Photo by Mark Wineka/Salisbury Post Scott Huler started his second day in Rowan County by having breakfast at Richard's Barbecue. The writer, a fellow of the Knight Science Journalism Program at MIT, is retracing a route through the Carolinas taken by Englishman John Lawson in 1700-01.

SALISBURY — Scott Huler has the definite sense now that he’s walking uphill, into a more rolling terrain where the color green dominates. Someone long ago — someone Huler feels a strong kinship with — called this part of his trip “a delicious Country.”

“It’s just such a beautiful place to walk,” Huler says. “I love it.”

Huler has become a modern-day explorer. He sends images to Instagram. He gives updates on Twitter, When he finds wifi, he pulls out a computer and posts a blog. He can’t hide his enthusiasm when he shows the wide-angle, telephoto and macro-lens attachments for his iPhone’s camera.

“I think Lawson would have used these things,” Huler says of his 21st century communication tools. “He was interested in sharing information.”

In 1700-1701, Englishman John Lawson took a backcountry trip into the Carolinas that covered about 550 miles and cut a bulging U-shaped swath from Charleston, S.C., to present-day little Washington, N.C.

Lawson traveled with five colonist friends and four Native Americans, including a woman, and in the process he produced a natural history, what Huler describes as “the first thorough description of the terrain, population, flora and fauna of the Carolina interior.”

Lawson also recorded his observations from the many different Native American villages and camps he visited. His 1709 book based on the two-month trek, “A New Voyage to Carolina,” became a bestseller in England and prompted the arrival of more immigrants to the South,

As a fellow of the Knight Science Journalism Program at MIT and supported by the Scientific American Blog Network, Huler has been retracing by canoe and on foot the route Lawson took 314 years ago, “and loving every second of it.”

Huler looks on Lawson as the First Citizen of North Carolina. Besides authoring his popular book, to which scientists and historians still refer today, Lawson also became Surveyor-General to the colony, a founder of Bath and New Bern and, in 1711, the first casualty of the Tuscarora War.

More than halfway toward an expected finish in the late summer, Huler posts updates to his “Lawson Trek” website, and the end product of the journey will be his own book, “A Delicious Country,” a phrase Lawson used at least twice.

Huler’s “Lawson Trek” brought him Tuesday and Wednesday into Rowan County, where he met, among others, Dr. John R. Crawford and historians Susan Sides and Ann Brownlee.

Carrying a backpack and wearing a floppy hat, sunglasses, T-shirt,  gym shorts and hiking boots, Huler walked about 18 miles Tuesday. He started in the Mount Gilead community of Cabarrus County and hiked all the way into Salisbury along the Old Salisbury-Concord and Old Concord roads.

He finished in downtown Salisbury, where he met up with Sides and Crawford. Huler spent Tuesday night at Crawford’s River Ranch property, then he returned to Salisbury Wednesday morning, ate breakfast at Richard’s Barbecue and picked up Lawson’s trail again.

Huler walked the length of Long Street and Long Ferry Road  before meeting up with Brownlee and talking about Trading Ford.

The Rev. Jethro Rumple’s “A History of Rowan County, North Carolina,” published in 1881, speaks of Lawson as providing the “earliest accessible” written accounts of what he described as “the hill-country of North Carolina.” Rumple wrote of Lawson crossing the Yadkin River at Trading Ford, within six miles of where Salisbury now is, but he also hints at his exasperation of not knowing what Lawson’s exact route was.

“From the Catawbas,” Rumple said, “Mr. Lawson traveled about 100 miles, at a rough estimate, to Sapona town, on the Sapona River. Taking into account the distance, in a route somewhat circuitous, the size of the river, and the description of the locality, there can remain little doubt on a reasonable mind that the place he indicated as Sapona Town was the Indian settlement on the Yadkin River, near Trading Ford.”

On the last day’s journey before reaching Sapona, Lawson himself wrote: ‘That day, we passed over a delicious Country — none that I ever saw exceeds it. We saw fine-bladed grass six feet high along the banks of the rivulets. Coming that day about 30 miles, we reached fertile and pleasant banks of the Sapona River, where on stands the Indian town and fort; nor could all Europe afford a pleasanter stream, were it inhabited by Christians and cultivated by ingenous hands.”

He’s pretty much describing the walk Huler took through Rowan County to the Yadkin River — only 314 years removed.

In his 1953 history, “The Rowan Story,” James Brawley said Lawson spent several days at Trading Ford with the Sapona chief. He writes how Lawson witnessed the Saponas’ release of Tutelo Indian prisoners, who were being readied for execution.

“Lawson gave vivid word descriptions of his stay among the Sapona Indians, and being much impressed with the location wrote at length of its beauty,” Brawley said. “He mentioned the various types of game which the Indians hunted — swans, geese, buffaloes, elk, bear and deer.”

Brawley said the Sapona did not stay long along the shores of the Yadkin after Lawson’s visit, as they were preparing to unite with other broken tribes and move east to a settlement under the protection of colonists. “The length of time that they remained here was at the most three years,” Brawley said.

Huler, 56,  has written pieces for large daily newspapers and national and state magazines. He is a  former staff writer for the Philadelphia Daily News and the Raleigh News and Observer and was a frequent contributor to National Public Radio. He also has authored six books and has been an instructor at Berry College and UNC-Chapel Hill.

He was the 2011 Piedmont Laureate in creative nonfiction. Today, he lives in Raleigh with his wife and two sons, and he talked with his family on Face Time Tuesday night.

“Lawson probably did not do that,” he says.

Last October, Huler started on his own Lawson Trek in Charleston by canoeing up the Intracoastal Waterway. Lawson began his own journey Dec. 28, 1700, in a dugout canoe with his other traveling companions, and they paddled along the coast until reaching a French settlement at the mouth of the Santee River. They then headed upstream until it became too difficult and walked the rest of their journey.

Lawson’s group finished near the mouth of the Pamlico River in late February 1701.

Huler says his own journey has not been “a slavish retracing,” but he has been trying to do what Lawson did: “Open our eyes to what is out there.”

He has spent two to three days a week on the trek before going back home and picking it up later. Along the way, he has relied on all manner of experts and commoners and says he is always pleasantly surprised when he meets people who know about Lawson.

Everywhere he has gone, strangers have been tremendously kind and helpful, he says, especially in helping him work out the logistics of where to leave his car and how to shuttle him back to the point where he resumes his walking.

During his trip he has slept in tents, on porches and in church pews, and to follow Lawson’s trek as closely as possible, he has relied on the 45-year interest in Lawson of independent researcher and former sewer engineer Val Green.

“He’s my rabbi at this point,” Huler says. “He knows more about Lawson than any other person on earth. … Val knows it, and I’m walking it. He’s just constantly looking after me.”

Lawson was impressed by the tribes he met. He found the Native Americans to be incredibly kind. They led him, guided him and were interested in him as much as Lawson was in them. From Huler’s perspective, Lawson seemed almost alone in his awareness that the slamming together of two completely different cultures, as represented by the Native Americans and the Europeans, was eventually going to lead to disaster — and not for the European settlers.

Huler says Lawson advocated marriages between Native Americans and Europeans as a way to meld two populations together rather than having one destroy the other.

In fact, Lawson knew he was witnessing the tail end of tribal cultures, ones already wracked by disease, loss of their land and alcohol, Huler says.

“His awareness was astonishing and worthy of enormous praise,” he adds.

Huler somewhat sheepishly confesses that until taking on this project he wasn’t aware the enslavement of Indians had occurred, and at one time, slave traders in Charleston made more money shipping Indians to the cane fields of Barbados than they did in trading African slaves.

“It was just unspeakable,” Huler says.

Huler thinks Lawson might look at people in today’s society and think what fools they are, for spending so much time indoors and in cars. Also, he might complain about the intellectual laziness around him, Huler says.

Americans today are bombarded with as much information in a day than Lawson was subjected to in a lifetime, “but does it do us any good?” Huler asks.

Above anything, Huler contends, Lawson wanted to be thought of as a scientist, and he had a tremendously keen interest in the natural world. In that light, Lawson would find great satisfaction in knowing the botanical specimens he collected on his Carolinas trip still exist in the British Museum of Natural History, which Huler made a point to visit.

By walking and investing in “shoe-leather reporting,” Huler pays more attention to the little things, such as how a road usually dips when it’s heading toward a creek, or how many major paths were along ridge lines so they wouldn’t be so wet.

Huler even finds himself heavily invested in the study of ditch ecosystems, which in many cases form today’s wetlands. He sat for an hour in a woman’s yard one day watching two frogs. He had stopped because he heard the sound of two “cloops” in some water by the road.

‘You’re just watching life on earth go about its business,” he says.

Huler understandably has come to see roads and paths as tools — tools that once led to the best hunting grounds, or the best places to ford a river, or the easiest passage through mountains or how when two paths crossed, as they did in Salisbury, how it led to establishment of a town.

What’s next on Huler’s Lawson-inspired trek? Who knows, but it should be delicious.

For information on The Lawson Trek and to follow Huler’s journey, go to www.lawsontrek.com. Blogs from the trek also are posted at http://blogs.scientificamerican.com/expeditions/ Contact Mark Wineka at 704-797-4263, or mark.wineka@salisburypost.com.