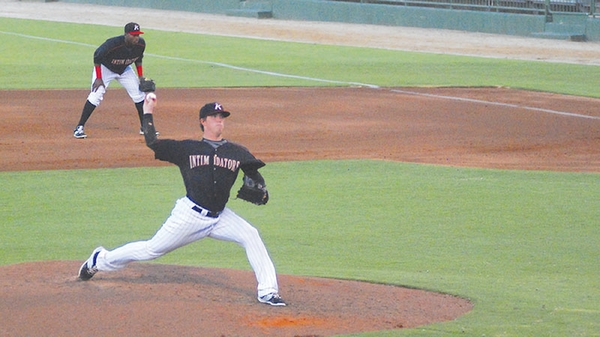 KANNAPOLIS — The Kannapolis Intimidators came into Wednesday night’s game with the hottest team, the hottest hitter and one of the league’s hottest pitchers. But baseball is a humbling sport.

The Lakewood Blue Claws cooled off the home team in impressive fashion, pounding out 16 hits off starter Thad Lowry and two relievers en route to an 8-4 win. Kannapolis (45-44, 10-10) had come in winning eight of their last 11, but they never got fully on track against the Blue Claws’ 6-foot-8 starter Ranfi Casimiro.

The big right hander held Kannapolis to just a pair of infield singles in the first four innings while his team was building a 4-0 lead. The Intimidators figured him out in the fifth with three runs on four hits but got no closer. He went 6-2/3 innings scattering eight hits to improve to 5-5.

“That guy (Casimiro) had three good pitches and he kept us off balance all night,” said Intimidators manager Tommy Thompson. “But you know in this game sometimes you just have to tip your hat to the other guy. They just outbattled us tonight.”

The hottest hitter coming in for Kannapolis was first baseman Alexander Simon who had a nine-game hitting streak and a .300 batting average. But Casimiro held him in check with three strikeouts and a groundout.

The hottest pitcher coming in was Lowry (9-5) who was trying to become the first Intimidator to win 10 games since 2011. Lakewood (44-44, 11-9) jumped on him for the four early runs on eight hits including a long two-run blast by catcher Deivi Grullon in the fourth.

Kannapolis finally got to Casimiro in the fifth as he abandoned his breaking stuff and went to more fastballs. Back-to-back doubles by Brett Austin and Michael Suiter started the inning. John Ziznewski singled, and Michael Danner added another double. Suddenly it was 4-3, and the Intimidators had new life.

But the Blue Claws responded immediately with two runs in the sixth to chase Lowry on a pair of doubles and two singles. They added single runs in the seventh and ninth off relievers Brad Salgado and Connor Walsh to finish it off.

“We battled back and made it close, but then we lost momentum,” Thompson said. “But we competed and still did some good things event though we lost the game.”

Louie Lechich had two early hits for the Intimidators, both of the infield variety, including a bunt down the third base line against a shift defense moved well around to the right side.

“I had seen it a few times before but not that dramatic,” Lechich said. “But we talked about it and  said basically if they are going to give you a base hit you take it.”

Austin and Suiter each contributed a single and a double to the Intimidators’ eight-hit attack,  The Blue Claws had several hitting standouts, but the most impressive was first baseman Kyle Martin, a 240-pound slugger just drafted in June out of he University of South Carolina. He improved his batting average to .378 with a 3-for-3 performance and two RBI.

The two teams will wrap up the series Thursday at Intimidators Stadium at 7:05 p.m. with Luis Martinez going on the mound for Kannapolis.