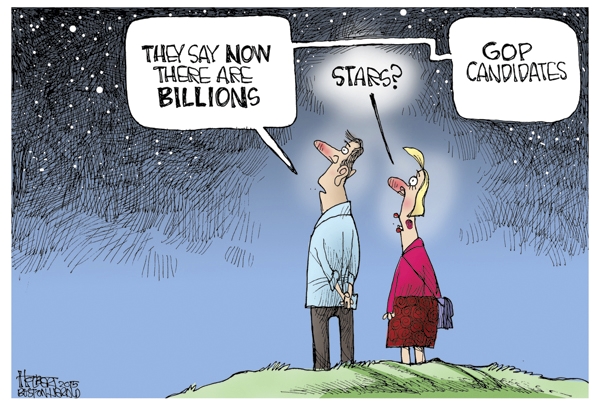 Editorial: Change ahead for the ‘Bury

An editorial cartoon by Jerry Holbert shows a man and a woman gazing at the night sky.

“They say there are billions,” the man says.

Scratch out “GOP” and insert “Salisbury City Council.” With 12 people officially signed up for the race so far and filing open until noon Friday, city voters are going to face a virtual cornucopia of choices this Nov. 3. There’s no primary in municipal elections here, and they are  nonpartisan — meaning you won’t find party identification on the ballot. So the field is wide open.

The fact that three incumbents are bowing out may account for the sudden rush of political interest. Without Mayor Paul Woodson, Mayor Pro Tem Maggie Blackwell and longtime Councilman Pete Kennedy on the ballot, thousands of votes are up for grabs.

City Council has done a lot of things right, too, but people don’t usually run for office to say “Me, too.” The candidates will talk about change, and change aplenty is on its way to Salisbury.

When people jump into the presidential race, their time in the spotlight can bring valuable name recognition to boost future campaigns, speaking fees, book deals, TV news gigs, you name it — even if they lose.

The perks of running for Salisbury City Council are considerably less. Candidates may gain name recognition — or notoriety — but essentially they’re putting their reputations, money and time on the line because they want to serve the people and shape the future of Salisbury.

Salisbury’s institutions are in the midst of generational change. When longtime council members step aside, they open the way for a new cadre of leaders to set the tone for the city. City voters, take note; this is not going to be Salisbury’s usual status quo election. Pay attention to these candidates and their stands; they’ll soon be setting new priorities for the city of Salisbury.

The Salisbury Post, Catawba College and the Rowan County Chamber of Commerce will hold a candidate forum Oct. 15 at the college. Details TBA.

RALEIGH – One thing I’ve noticed in 16 years covering government and politics is that it’s often difficult to find... read more