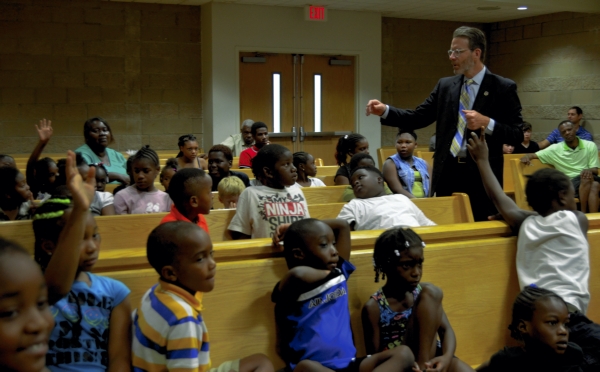 EAST SPENCER — The hysterical laughter of children filled the Rowan County Courthouse Monday morning as Chief District Court Judge Charlie Brown took a group of 44 children and chaperones through a mock trial. The outing was just one of many planned during the Royal Giants Summer Camp program.

Andrew Mitchell, camp director and East Spencer parks director, said the camp has grown in the last three years from around 20 participants the first year. The camp is for children ages 5 to 13 and is held from 8 a.m. to 1 p.m., Monday through Friday at Royal Giants Park, 200 Robinson Road.

The problem Mitchell and volunteers have been faced with is they’ve gotten more campers this summer than they have funding. They have 64 children who want to attend, but many of the activities and outings limit that number to 44 or 45.

The town received a grant from the Robertson Foundation, but since they’ve gotten a larger number of interested participants this year, even with the grant funds organizers say they’ve have been stretched to capacity.

There are four weeks left of camp and Mitchell said organizers are appealing to the community to help provide monetary or in-kind donations to provide a camp experience for more children.

Each day the campers have breakfast, lunch and a snack. The campers also have an off-site activity that includes swimming, movies and other field trips. On Fridays, a guest speaker talks to the children about potential careers.

On Monday the children learned about the court process. The children giggled as they found one of their own “guilty” of stealing a bicycle from Walmart during a mock trial complete with a judge, attorneys, bailiff and jurors.

Alderman Otis Gibson, who is a board liaison to the camp, said the town is just not able to provide all of the funds.

“We are on a strict budget. I would really hate to turn them away, especially during the summertime,” Gibson said of interested campers.

Last week, during the first week of camp, there were 64 children who attended, he said, but because of a lack of funds they were only able to accommodate the pre-registered children on a recent outing.

Gibson said the camp organizers will accept donations of any kind be it snacks, monetary, transportation or volunteers. All volunteers must undergo a background check through the town.

The camp is free to those who attend because of in-kind and monetary donations. Gibson said a few years ago, they began charging to attend the camp, but realized it hindered a lot of children from participating.

“I really hate to see us having a child out there with nothing to do,” Gibson said.

This week, members and volunteers of Freedom Roots ministry will also provide “Backyard Bible Club,” a series of events that include games, movie night and basketball offered at Royal Giants Park. The events begin at 7 p.m. today and will end Friday. For more information, contact the Rev. Dustin Wilson via the ministry’s website, www.freedomroots.net.

For more information about how to donate, volunteer or attend Royal Giants Summer Camp, contact Andrew Mitchell at 704-245-4222.