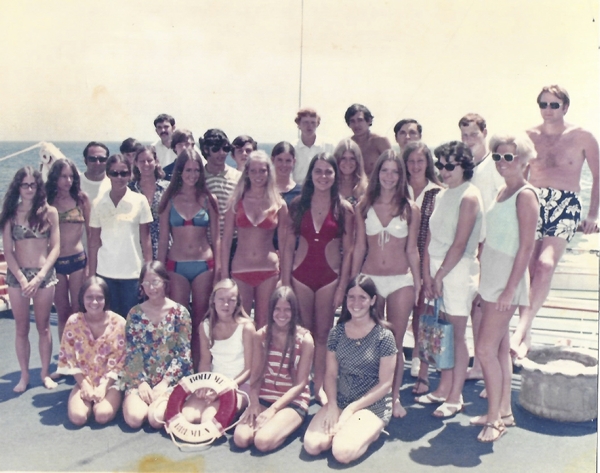 Charlie Sowers provided this photograph of senior high youth and adults from St. John’s Lutheran Church who embarked on their ‘Big Trip’ cruise in June 1971. The youth planned a ‘Big Trip’ every three years, and Sowers, pictured in the top right corner, and his wife, Beth, in the sunglasses directly below him, were advisors on the trip, which visited four different ports, including St. Thomas in the U.S. Virgin Islands. Hollis Miller was the youth pastor. As Sowers recalls, the group of high schoolers left late in the afternoon on a bus bound for Miami, riding all night and arriving in Miami early the next morning. They visited a Lutheran Church where Pastor Stevenson, previously an assistant at St. John’s, greeted them, and they boarded the cruise ship in Miami. Carolyn Loeblein Byrd, one of the youth on the trip, helped Sowers in identifying many of the people in the photograph. The front row, kneeling left to right, includes Lucy Wagner, Beth Crayton, Ann Menius, Emily Brown and Carolyn Loeblein. The second row of all women includes Julie Bradshaw, not identified, not identified, Kim Jordan, Sherry Payseur, Julie Casper, Lisa Rufty, Susan Miller and Beth Sowers. The third row starts with driver Sonny Lippard, and the woman next to him is Gaye Isenhour. The boy and girl who follow are not identified, but they are followed by Joedy Simmons and Melonie Rufty. In the back, the partially hidden guy over Isenhour’s left shoulder (to the right of her in the picture) is John Henderlite. Following him are Emmette Thompson, Jon Rufty, Cliff Ritchie, Hollis Miller and John Sherrill. Among those who went on the ‘Big Trip’ but could not be identified in the photograph for sure were Diane Norris, Bill Porter, Debbie Beaver, Cindy Olinger, Joe Gribble and Jeff Peeler.

Yesterday: the Blackmer family in 1957

In this photograph from February 1957, provided to the post by Mike Cline, noted Salisbury screen and stage actor Sidney... read more