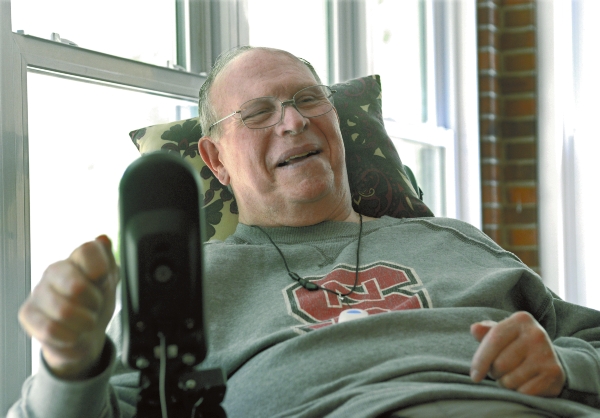 Ray Rivers, who received spinal cord injuries in an automobile accident a year ago; has just been able to return to his home in China Grove.; photo by Wayne Hinshaw; for the Salisbury Post

“We’ve had some bumps in the road, but we’ve come through them OK.”

Diane Rivers, if that’s not the understatement of the year, I don’t know what is. Last June, Diane’s husband, Ray, had a horrific accident on the way to the beach, when the heavy-duty truck he was using to pull their trailer blew a tire. Ray had a spinal cord injury, and spent months in rehab at Wake Med in Raleigh and White Stone in Greensboro.

He and Diane — who never left his side — returned to Salisbury in January, staying at Oak Park Retirement Center until March. While they were away, they’d had their carport converted into a spacious bedroom and handicapped bath to serve Ray’s needs.

While at White Stone, he’d dealt with a kidney stone, and while at Oak Park in February, he fell from his wheelchair. Then he had gall bladder surgery. In the meantime, Diane had to have her left big toe amputated, as well as a tumor removed from her left knee.

After all that, doctors encouraged Ray to go to rehab at Carolinas Medical Center. Ray and Diane came home to stay — they hope! — at the end of June.

Diane has learned to keep an eagle eye on Ray, who’s learning to move his hands more but is still considered quadriplegic.

“He doesn’t really have symptoms,” she says, which she discovered after the gall bladder episode. “When he gets sick, you better be doing something about it. The ER doctor said his gallbladder was a mess. We really have to pay attention to anything. He very rarely complains.”

Even after what he’s been through the past year, Ray is not a complainer.

“I’m feeling OK now,” he says, sitting with his family in the sunroom earlier last week. Surrounding him are Diane, his wife of 49 years, daughter Julie York from Ramseur, son Jason from Salisbury, and his brother and sister-in-law, Tony and Earlene. Their other son, Philip, lives in Virginia and visits often.

Ray continues, “I just hate that everybody’s having to put up with me because I’m so much trouble.”

Diane assures him he is most certainly not any trouble.

“Tony and Earlene have been wonderful,” he says of his only sibling and sister-in-law. “They have helped us in any way possible.”

So have dear friends Melvin and Faye Heilig, and their neighbors Galen and Pat Burris. Along with a host of other friends and their congregation at Grace Lutheran Church, which raised $35,000 for the couple at their annual fish fry in October.

“Ray and Diane have always been such strong members,” says Robin Bernhardt, one of the fish fry organizers. “We’re trying to do for them because that’s what they would do for us.”

The fish fry proceeds went a long way toward the upfitting of the Rivers’ home, as well as for the addition of a two-car garage that is now under way.

“Our congregation has supported us the whole year — financially, morally, and with meals,” Diane says. “They have looked after us.”

In fact, the congregation is planning a yard sale to benefit the couple in September.

“I do not know how we would have made it this year without the support of the church,” Diane says.

And the support of family.

Julie, who raises chickens with her husband, quit her part-time job to help take care of her daddy.

“It’s just been absolutely heartbreaking,” Julie admits. “I have cried more tears than I could keep up with. Daddy has been so strong and the caregiver for our whole family. It’s been a real struggle to see him be so needy. I know that’s been really, really hard for him.”

The whole family was together for Father’s Day 2014, just days before Ray’s accident, Julie says. “Father’s Day was a perfect family day. I’m a real daddy’s girl. It’s been humbling. It makes me aware of how you should treat other people when bad things happen to you.”

“Our family has just been exceptional,” Diane says.

Since Diane has had her own health issues, she and Ray have hired Coretta Ridenhour, who comes in every day to get Ray up and ready for the day, and get him to bed at night. It’s a two-hour process on both ends.

“They have come up with ideas to do something for us this whole year,” Ray says.

That even includes cleaning out the refrigerator and organizing kitchen cabinets when Ray and Diane were gone for weeks on end.

“It was fine with me,” Diane says. “They are even going to help me clean out my basement, and I’m thrilled to death! All that will go to the yard sale.”

Ray and Diane were both feeling well enough to celebrate their 49th anniversary with a trip to Outback with Tony and Earlene and Melvin and Faye.

One of Ray’s doctors told Julie what a “true love story” her parents represented. “I thought that was so special of him to say that.”

Ray is a retired teacher and principal, and Diane is a retired school secretary. They continue to be amazed at the number of former students who have contacted Ray and sent cards. One even sent Ray an autographed photograph from Dolly Parton. That picture went up, but there was none of Diane in sight. It didn’t stay up for long.

Even without that picture on the wall, Ray is glad to be home.

“It makes me feel a whole lot better,” he says.

He can use the TV remote, and is learning to use an iPad. He and Julie can text each other again, which has made her so happy. Ray is anxious to get back to physical therapy this week. Because he’s an avid reader, he wants to figure out how he can turn the pages of a book.

“It’s frustrating, but I’m getting better at it,” he says.

“He has the best attitude,” Julie says. “He just keeps up his sense of humor. He has every right to be grumpy but he’s not.”

Ray charmed the nurses, calling himself “George Clooney” whenever one asked him for his name.

She didn’t miss a beat.

Ray says the support of his friends and his family, as well as his strong faith, has helped him maintain a positive attitude.

“For some reason this has happened,” he says. “We are just trying to figure out God’s plan.”

Not only will Ray get back to physical therapy, he’s taking Botox injections to help relax the muscles in his arms and hands.

Now that Diane can drive again, she’s keen to get out of the house with Ray. They are able to do that, thanks to the recent purchase of a handicapped minivan.

“She and Dad can scoot around town now,” Julie says.

They’re even hoping they’ll make it to church on Sunday.

“We’ve really missed church,” Diane says. “We get a bulletin each week, but it’s just not the same.”

Diane admits she’s not the best planner. “We’ve had to learn to make adjustments with time.”

Ray goes along when Diane and Julie run to Food Lion or Walmart, but stays in the car.

“I’ll howl like a dog,” he says, and it embarrasses the girls to death.

“He keeps up funny stuff like that all the time just to make us laugh,” Julie says.

Ray says his goals in rehab are to gain better use of his hands, and to make transfers without so much trouble.

“I want to stand and walk, but I know that’s less and less of a possibility,” he says.

“He’s an achiever,” Diane says. “He’s very anxious to get back as much mobility as he can.”

Looking back over the past year, Ray says, “We’re thankful for everything. We’re just overwhelmed by everyone’s love and generosity.”

“Our community has stepped up and helped in every way,” Diane says. “It’s been a total community effort to support us and show us love and concern.”

You can bet the entire family will be at the Grace fish fry on Oct. 10. This year’s event will benefit Ava Reece, 4, who has leukemia. The Extraordinaires will be performing.

“It’s just a blessing to go and work and help,” Earlene says.

“I’d like to encourage everyone to go and enjoy a great meal and support this young girl in her fight,” Diane says. “If you’ve ever been to the fish fry and you’ve benefitted, you want to be there.”

He smiles that mischievous smile of his and says, “They’ll find something for me to do.”

For updates about the yard sale and fish fry, visit the Grace Lutheran Church Web site at www.grace-salisbury.com.