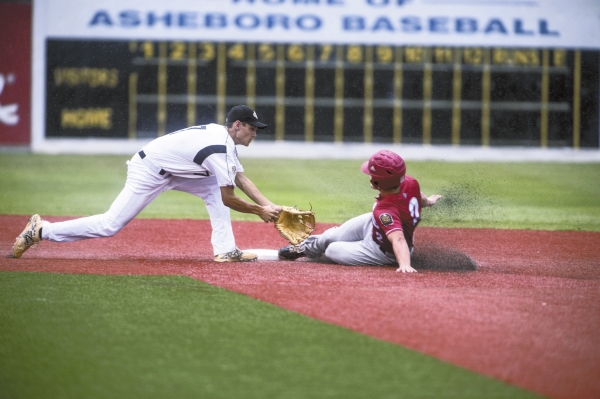 PJ Ward-Brown/The Courier-Tribune Randolph County’s Daniel Reece is late on the tag on Rowan’s Riley Myers at second base early in Monday night’s American Legion Area III playoffs baseball game at McCrary Park in Asheboro. Randolph won the game, 4-1, to even the best-of-five series. Game 3 is tonight at Newman Park.

ASHEBORO – Apparently all of the lightning wasn’t in the sky around McCrary Park Monday night when Randolph County and Rowan County met in Game 2 of the American Legion baseball third-round playoff series. There was also some in the bat of Randolph’s Aaron Garner.

Garner hit a solo home run in the second inning and added a run-scoring double in the fourth, and pitcher Brady Wright made it stand up in a 4-1, seven-inning victory that evened the best-of-five series at 1-1.

The game was twice delayed by lightning, the first for about 35 minutes in the top of the third inning, and the second time with one out in the bottom of the seventh. After a 42-minute delay, the game was called.

Game 3 is schedule for tonight at Newman Park at 7:00.

“I’ve been struggling and I just wanted to go up there with more confidence,” Garner said. “I just want to get back to hitting it the way I did for Asheboro (High School).”

Wright, who was battered around by Rowan County during the regular season, went the entire seven innings, yielding one run on six hits. He walked one and struck out three batters.

“We got some hits against him early on last time and I think he may have lost some confidence,” Rowan County Coach Jim Gantt said. “He was pretty efficient and he changed his speeds well. He kept us off-balance and his defense played well behind him.”

“I think the big difference was he was ready to pitch,” Pugh said. “He stayed down and hit spots. He knew what his problems were last time and he worked on that. It was location.”

Garner’s solo home run over the left-field wall tied the game at 1-1 in the second inning and his RBI-double in the fourth gave Post 45 a lead they would never relinquish. Both came off Rowan County starter Hunter Shepherd, who had a 5-0 mound record coming into the contest.

Rowan County, 21-6, scored first to take a 1-0 lead in the second inning. Riley Myers started the inning with a double and with one out, Dustin Ritchie, who had two hits in Game 1, singled in Myers. Jeremy Simpson followed with a single to put runners on the corners, but Randolph got out of further trouble with an inning-ending double play.

Post 45 added two big runs in the sixth inning to extend its advantage to 4-1. Caleb Webster led off with a double down the right-field line and with one out, Jay Rorie was hit by a pitch. Nathan Reynolds reached on a fielder’s choice and Garner was hit by a pitch to load the bases. With two outs, Cam Morrison then singled down the line in right field to plate Webster and Reynolds.

“That’s how you get to heaven,” Gantt said. “Strong pitching and two-out hits.”

Both Myers and Simpson were 2-for-3 to lead Rowan. Garner and Kirby Lambert had two hits each for Randolph.