Play review: You Tarzan, me impressed 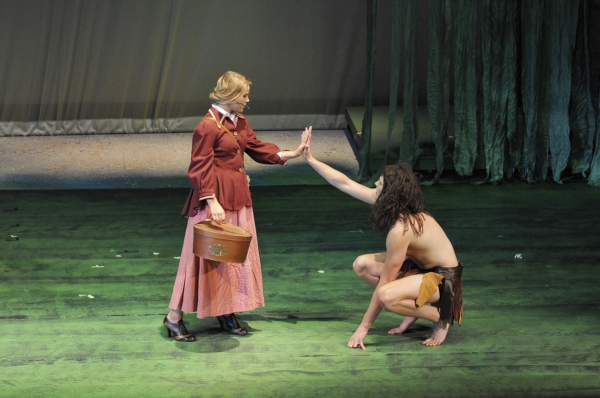 “Tarzan” is my favorite Disney story of all time, so you can imagine how delighted I was to learn that the Piedmont Players Theatre adaptation is very close to Disney’s epic animated film with a few minor changes.

The show begins 10 minutes before the show actually begins, with the audience taking their seats as they see a hurricane slowly approaching the coast of Africa. The house lights dim as the sound of a violent storm fills the Norvell Theater while simultaneously the projected image of a horrible shipwreck lights up the stage.

Although Reid Leonard always exceeds expectations when it comes to set and light design, he and his tech crew have completely outdone themselves with “Tarzan.” With the use of a black scrim, a projector and some very clever lighting, the Norvell stage is transformed from a shipwreck to a breathtaking underwater scene where a man is seen diving to the bottom of the sea to save a woman and her baby, to a sandy beach and finally to the heart of the jungle — all in the first five minutes.

“Tarzan” tells the story of a baby who is raised by a tribe of gorillas after his parents are killed by a leopard. Jane, who arrives with a British expedition, teaches him about the world he comes from. She teaches him about being civilized and about love. The ape-man is faced with the choice of staying with his adopted primate family or leaving the jungle for a civilized life in England.

Having been a lover of the Disney film and having never seen the live stage version, I must admit I arrived at the Norvell on opening night a bit apprehensive. Within the first 10 minutes of the show, all apprehension was gone. I was mesmerized by the realistic ape-like movement the cast demonstrated as well as the intricate harness system used to zip the talented cast around the stage.

Two different actors performed the title role brilliantly. Owen Teague bounds about the stage as young Tarzan until a the cast belts out, “Son of Man,” one of the many heart-thumping numbers written by rock legend Phil Collins. Midway through the tune, in swings East Rowan High’s Corbin Elliott as the adult version of the character. He swings like an ape but loves like a man. As the show progresses Tarzan’s loyalty is tested as he struggles with the meaning of “family” and tries to find who he really is.

Lauren Huenkle stars as the loving, adoptive ape mother, Kala. With an amazing and powerful voice Kala forms a bond with Tarzan that was so palpable that I actually fought back tears at times.

Amery Barton is perfectly cast as Jane. I have reviewed several previous PPT shows in which Barton appeared, but this is by far her best performance.

Other standout members of one of the most talented casts I have seen at the Norvell include PPT veteran William Clark as the perfectly accented Professor Porter, PPT newcomer Tanner Groppi as the hysterical adult version of Terk, and Jacob O’Neal as the perfectly despicable villain Clayton.

Director and choreographer Gwen Matthews has done a tremendous job with the assistance of Austin Hayes and a huge team of crew backstage to make sure everyone flies safely. Gwen’s choreographed somersaults, cartwheels and ballet are perfectly backed by amazing music brought to life by Music Director Laurie Klauss.

With just a few typical opening night technical difficulties that will easily be fixed for future performances, perhaps the aspect of the show that impressed me most was the costuming. Costume designer Maddie Shue, along with her team including her mother Ashley Ward and Eastern Costume Company and several volunteers, brought a realism to the production that cannot be complimented enough.

Thanks to Producing Partners F&M Bank and Salisbury Community Foundation, an unbelievably talented cast and crew and the best youth theater in the country in my opinion, “Tarzan” is a family friendly show for all ages. The only people who won’t enjoy this show are those who wait to reserve their tickets, since the opening night performance was completely sold out and tickets for remaining shows are going fast.

Lindsay Veros is a recent graduate of Salisbury High School who is headed to North Carolina State University this fall.