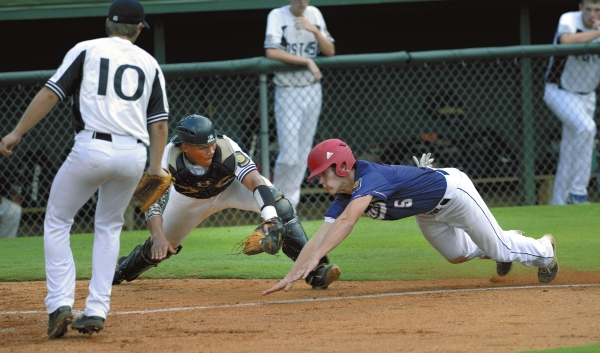 To the surprise of no one, the struggle between old rivals came down to the final pitch. That pitch was a hopping fastball that Rowan closer Riley Myers blew by swinging Jay Rorie with the bases filled with Randolph base runners.
“It was pressure,” Myers said. “But it was a fun kind of pressure.”
Rowan’s six-run second inning put the home team in command, starter pitcher Omar Bautista (3-1), who worked into the seventh inning, and relievers Bryan Ketchie, Sawyer Strickland and Myers preserved that lead, despite a series of anxious moments.
“Randolph is a very tough team, I got behind good hitters and they hit some balls a long way,” Bautista said. “I haven’t had a decision in a while and I had to leave it up to our relievers again. They finished off a good win for us. I did my job and they did their jobs.”
Bautista aided himself with pickoffs in the first and fifth innings. It also helped him that both homers he surrendered — Cameron Morrison in the second and Tristan Marsh in the seventh — were solo shots.
“Playing Randolph is a little bit like playing a college team,” Rowan coach Jim Gantt said. “You’ve got to be good all the time against them. If you lose focus and make a mistake, if you groove a fastball, they’ve got guys who will hit it hard. They’ve got a scary lineup.”
Rowan’s defense played a huge role in the team’s 19th win in its last 20 games. Third baseman Juan Garcia and right fielder Harrison Baucom made galloping catches in foul territory that were extraordinary, and shortstop Jeremy Simpson made a backhand play in the ninth that saved Rowan.
“We battled back hard,” Randolph coach Ronnie Pugh said. “But we dug a big hole early in the game that was tough for us to overcome. Our pitcher was getting behind in the count, and they put up a big inning before we had anyone else ready to come in.”
Randolph starter Ryan Webb was knocked out in the second inning, but relievers Clint Marsh and Caleb Hassell were effective and gave Post 45 every opportunity to rally.
A base hit by Heath Mitchem (3-for-3, plus two walks) triggered Rowan’s huge second inning. Rowan (21-5) bunched three walks and five hits. Baucom hammered a two-run double to left-center and Myers produced a two-run single with two out.
A confident Bautista steamed into the fifth frame with a 6-1 lead, but that’s when back-to-back doubles by Marsh and Reece Daniel suddenly drove in three Randolph runs.
Rowan pushed its lead back to 8-4 in the sixth on RBI-singles by Myers and Dustin Ritchie.
Marsh’s seventh-inning homer pulled Randolph a run closer.
Aaron Garner drove a towering fly ball 350 feet against Ketchie with two men on in the eighth inning and nearly tied the game. But it’s 360 feet to center field at cozy Newman Park, and Kacey Otto made the catch as Rowan fans sighed with relief.
Shortstop Caleb Webster made a diving play on a ball smacked up the middle by Ritchie to keep Rowan from adding runs in the bottom of the eighth.
Daniel and Kirby Lambert had clutch hits in the ninth for Randolph (23-11), but Simpson’s super play in the hole on a ball stroked hard by Webster provided a crucial second out.
With runners at second and third, Myers pitched carefully around cleanup man Nathan Reynolds with a walk that loaded the bases.
“Once we got behind that lefty, we weren’t going to throw him something down the middle,” Myers said. “We took our chances with the next guy (Rorie) — and we got him.”
So Rowan got in the first punch in what should be an exciting series.
“It’s the third round,” Pugh said. “The third round is supposed to be tough.”

The series continues tonight at Asheboro’s McCrary Park at 7 o’clock. The teams return to Newman Park for Game 3 on Tuesday.