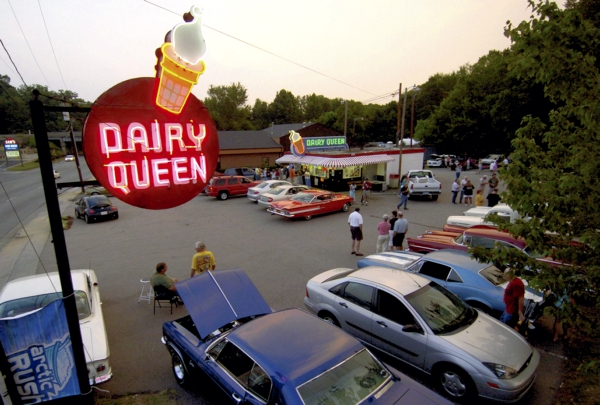 As the sun sets, the old neon sign shines brightly over the mix of modern and classic automobiles during the ’50s Night at the Dairy Queen on West Innes Street in Salisbury on Saturday, June 16, 2007. Photo by Jon C. Lakey, Salisbury Post.

For 65 years, the Dairy Queen on West Innes Street in Salisbury has been the perfect escape for people looking for relief from the scorching rays of the summer sun. The small, square building with its walk-up windows below a red-and-white striped awning is a piece of history frozen in time.

People come from all around to get a dipped cone, a frosty Blizzard or even a Cheerwine float. They stand in the parking lot or sit in their cars while enjoying the sweet treats served up inside the little box of a building. Tourists take pictures of the Dairy Queen with its neon sign that glows red along the roadside in the evening twilight.

Young and old flock to this place that sits on a hillside across from Sam’s Car Wash. And the boys who work at the wash are regulars at the DQ.

David and Sandy Lee have been coming here ever since they moved to Salisbury when Georgia-boy Jimmy Carter was president. David usually gets a dipped cone while Sandy is a Blizzard gal.

The couple, second-grade sweethearts, said they enjoy the old-time feeling of the place.

“Feels like you’re shipped back into the ’50s when you’re here,” David said.

And he’s right, the Dairy Queen has hosted ’50s night several times over the years.

The DQ first opened in 1950 and was operated by Gerald Grumbly and Robert Wiederman of West Palm Beach, Fla. In 1981, it was bought by Robert Utley and his business partner, Bill Link. Utley and his wife, Melissa, still own the DQ today. When she was in high school, Melissa started working at the Dairy Queen shortly after Robert bought it.

Over the years, a romance developed between the pair, and they were married in 1991. Robert, who also has been a pilot for 23 years, is currently a captain with US Airways, and Melissa runs the DQ full time.

Their two children, Nick and Jessica, often work at the DQ, too. Jessica, 23, is the older of the two and a teacher at Landis Elementary.

It’s a “family affair,” Melissa said, adding her children were pretty much raised at Dairy Queen.

Some even stay longer, such as Amanda Earnhardt. She started working at the Innes Street Dairy Queen when she was in high school and now owns the one off Statesville Boulevard. The Utleys opened that location in 1986 and sold it to Earnhardt three years ago.

One of the perks of working at the Utley’s Dairy Queen is you can eat all the ice cream you want. And Joe Cornacchione knows this all too well. The East Rowan High School senior has been working at DQ for two years, and in that time, he has gained 50 pounds and then lost 50 pounds.

A “champion eater,” is how he described himself.

Kristen Kimmer, a sophomore at Catawba, has been working at the Dairy Queen for two years.

“It’s an easy job,” Kimmer said, adding she gets to meet a lot of people and that Melissa is a fun boss and flexible with her work schedule around school.

The employees know the regular customers, not by their names but by what they always order: “Milkshake guy “and “Blizzard man,” for example.

Joan and Richard Young live in Spencer — right on the city limit with Salisbury — and have been coming to Dairy Queen on West Innes Street for 20 years. Joan enjoyed a small chocolate cone and Richard had a large milk shake.

Terry Sullivan and her husband , Danny, live in Lexington, where there is no Dairy Queen. Terry said they make the trip to the DQ in Salisbury about once a month, more in the summer. They enjoy the atmosphere.

Terry said she usually gets a tropical Blizzard, and Danny mixes it up.

Melissa Utley said she loves the Dairy Queen and that she and Robert have no plans to sell it … ever.

Their children will own it one day, she said.