Ruff start with a purrfect ending 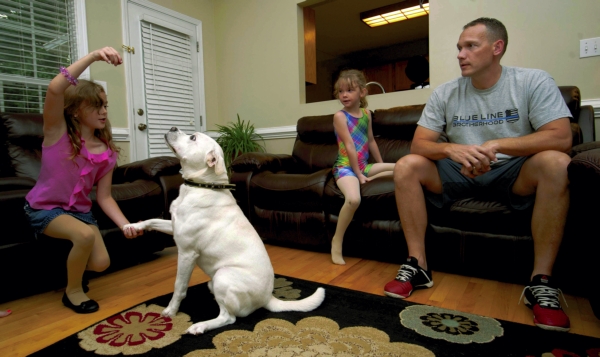 Ashley Myers, 7, holds up a treat to give Prince when he ‘shakes hands’ as sister Kelsie and father Aaron watch. The Myers family are enjoying the company of their newest family member, the lab and boxer mix the family adopted from Faithful Friends. Jon C. Lakey/Salisbury Post

Aaron and Jennifer Myers and their three daughters — Kelsie and Ashley, 7-year-old twins, and Emily, 12 — knew they wanted a family dog when they walked into Faithful Friends Animal Sanctuary for the first time in January.

The family had owned a German shepherd for two years, but had to give him back to his previous owner for behavioral issues. The family wanted a rescue and they had heard of Faithful Friends, which is located right up the road from where they live. They checked out the agency’s website and looked at the adoptable dogs.

The dog they chose from the shelter was a 1-year old white lab and boxer mix named Prince. Prince came to Faithful Friends when a family who had been evicted from their home pulled up to the sanctuary to give him up, along with another dog named Simba. One of the unique traits about Prince are his eyes. With one blue eye and one brown, Prince is hard to overlook.

Aaron walked through the kennels with Kennel Manager Brandy Smith to take a look at the dogs available for adoption. The top three picks were Jojo, a female black lab, Dasher, a male black lab puppy, and Prince.

“They made it easy to go through the process,” Aaron Myers said of the Faithful Friends staff. He said it was “neat” how “they knew their dogs” so well.

When the Myers family went to spend some time with Prince in one of the play yards, they saw that he really wanted to play and were impressed by how gentle and tolerant he was.

Today, Prince’s favorite toy is a red rubber chew toy that he loves playing tug of war with. He spends a lot of time playing with the three Myers sisters, who really adore him. Myers says Prince is a “perfect fit” for his family and has adjusted very nicely to their home.

Terry Spurlin adopted Rainbow as a kitten at around 8 weeks old in May of 2014. Rainbow originally came to Faithful Friends with two siblings in a taped-up microwave box. The sanctuary took her in and found her a home with Spurlin pretty quickly. Because Rainbow is a rare longhaired calico, many visitors were interested in adopting her right away.

Spurlin originally found out about Faithful Friends from her niece, Brandy Smith, who works as a volunteer and as the kennel manager at the sanctuary. She now spends her time volunteering with the sanctuary in the cat rooms every week.

Although Spurlin refers to Rainbow as her “baby,” she is not the only cat in the house. She is one of seven, and of those, four were adopted from Faithful Friends: Rainbow, Cinnamon, Little Bit and Autumn.

In addition to the seven cats, Spurlin also has an 11-year-old Australian shepherd and chow chow mix named Jake who stays outside. Jake wandered up to her house as a stray, and she has cared for him ever since.

Spurlin said she adopted Rainbow because she looks very similar to a cat she had growing up, also named Rainbow. Rainbow’s favorite toy is a little pink ball that she carries around the house regularly. All seven of the cats get along and pass the time playing together.

“Every single one of ‘em has a different personality” Spurlin said.

Rainbow fit right into the home and although she is wary of strangers, it is easy to see how much she loves her family.

Kyndall Moore began volunteering at Faithful Friends in January of 2013 and says it has been a “big part in my life.”

At the time, she and her husband, Sandy Moore, had two dogs — Soloman, an older golden retriever, and Gibson, a black lab. Sandy had talked to Kyndall about Soloman getting older, and he tried to prepare her for the old dog’s passing.

Around the same time, Marley, a 3-year-old male golden retriever, came to Faithful Friends. It wasn’t long until Kyndall and Sandy agreed on adopting Marley into their family. Soloman, Gibson and Marley lived together for a year before Soloman passed away, at the age of 10, in October of 2014.

Reflecting on the passing of Soloman and her decision to adopt Marley, Kyndall says “I think your heart does grow.”

Kyndall describes Marley as “very, very affectionate,” “giddy,” an absolute “ham” and  “laid back and shy.” Her favorite thing to do with him is to sit on the floor and pet him. She refers to him as her “guardian angel” because he always “has to be touching you.”

Marley’s favorite thing to do is eating. Whenever it’s his feeding time, he starts to run in place and then “vacuums his food,” Kyndall said. And then he “needs to be petted after eating.” She explained that she can be on the opposite end of the house from him when he finishes his food, but that he still runs to find her as a sort of thanks.

“He is so grateful,” Kyndall said. “I think that they know that you saved them.”

Kyndall said she wanted to encourage others to “give rescues a chance.”

Faithful Friends Animal Sanctuary is located at 220 Grace Church Road. For more information visit their website at www.faithfulfriendsnc.org or call 704-633-1722.

Allana Ansbro is a student at the University of North Carolina at Asheville and a Salisbury Post intern.