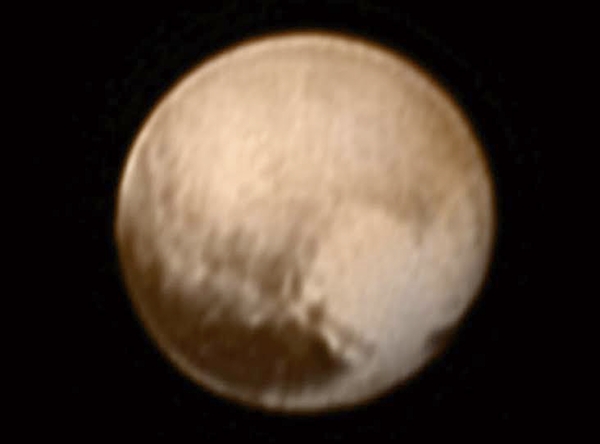 Pluto: Planet or not?

For many years, Pluto was considered the ninth planet in our solar system. The reason is simple enough. It was discovered by Clyde Tombaugh in 1930, at a time when astronomers were searching for another planet that might be affecting the orbit of Neptune. Shortly after its discovery, however, Pluto started looking very different from the other planets. Astronomers were puzzled.

The major planets in our solar system fit a nice pattern. Closer to the sun, we have four small dense planets with rocky surfaces. Our home planet Earth is one of these. Farther out, beyond the asteroid belt, we encounter the four gas giants, including Jupiter and Saturn. All of these planets have approximately circular orbits and go around the sun in roughly the same level plane.

We quickly realized Pluto is different. Its orbit is highly elliptical and tilted about 17 degrees relative to the orbits of the other planets. Between 1970 and 1990, Pluto even passed inside Neptune’s orbit and came closer to the sun than Neptune ever does. Pluto is even smaller than our moon.

Another surprise came in 1978 when Pluto’s largest moon, Charon, was discovered. Charon is nearly half the size of Pluto. Some astronomers even consider Pluto and Charon to be a double planet.

The puzzle became even more interesting in the 1990s. With larger telescopes available, including the Hubble Space Telescope, astronomers started discovering other distant objects like Pluto. Hundreds of similar planets have now been found out past the orbit of Neptune. Several of these transneptunian objects have moons, and at least one is even larger than Pluto.

With all of these discoveries, astronomers finally realized there was a need for a new classification. In 2006, the International Astronomical Union, astronomy’s governing body, created a definition for “dwarf planet.” Pluto was assigned to this class. To astronomers, this seemed like the right thing to do. Since then, they have been answering the inevitable question, “Hey, why isn’t Pluto a planet, anymore?”

Voyager 2 was big news in the 1980s. It became the only spacecraft to visit all four of the Jovian planets … Jupiter, Saturn, Uranus and Neptune. By 1990, Voyager 2 started on its swing toward the outer solar system, and Pluto moved back outside the orbit of Neptune. With all of the questions about Pluto and the new discoveries of other distant objects like it, NASA started thinking about how to get there. Several ideas were considered. The final decision was to send a light, fast spacecraft on a flyby mission. New Horizons was born.

The spacecraft itself is small for an interplanetary mission, only about the size of a grand piano. However, it carries seven instruments that allow it to collect a wide variety of valuable scientific information. Since it will travel so far from the Sun, it carries a plutonium-powered generator that will provide electricity for many years. Built-in thrusters allow for minor course corrections during the flight to Pluto.

New Horizons was launched on Jan. 19, 2006, nearly 10 years ago. It immediately became the fastest spacecraft ever to leave Earth. While it had taken the Apollo astronauts several days to get to the moon, New Horizons crossed the moon’s orbit only nine hours after launch.

A little over a year later, New Horizons reached Jupiter, the next important step on its journey to Pluto. The massive planet gave the small spacecraft a gravitational “slingshot” assist. New Horizons’ speed increased to more than 50,000 mile per hour.

A long trip still lay ahead for New Horizons. Even at this speed, it would take another eight years to reach Pluto. As New Horizons closes in on Pluto, radio signals from Earth to the spacecraft — a distance of 3 billion miles — take nearly 4½ hours to get there. This makes direct control of the spacecraft impossible, but New Horizons is programmed for everything that it needs to do during its historic encounter with Pluto.

What will we find?

Pluto has become even more interesting while New Horizons has been cruising out from the Sun. While the spacecraft was being built, Pluto’s moons Nix and Hydra were discovered in 2005. After launch, two more moons were discovered — Kerberos in 2011, and Styx in 2012. We now know about five moons orbiting the planet.

This presented an even more interesting challenge for mission controllers. Pluto’s axis of rotation is tilted toward the Sun. The planet and the orbits of its five moons look like a target viewed from an angle, with Pluto as the bullseye. And it’s a small target — the entire system would fit between Earth and our moon.

New Horizons is on course to intercept that target. It will pass inside the orbits of four of the moons and then pass behind Pluto and Charon, in succession. This will allow the instruments on board the spacecraft see what happens to sunlight passing through Pluto’s atmosphere. That will tell us a lot about the gas surrounding the small planet.

Until recently, the best images of Pluto, obtained with the Hubble Space Telescope, showed only vague light and dark patches on the surface. Now that New Horizons is getting close to the planet, more detailed images are coming back. During Tuesday’s flight past Pluto, the camera and instruments on board will be continually studying the planet to learn more.

Astronomers and mission controllers back here on Earth will have to wait while this is going on. New Horizons will have all its instruments pointed toward Pluto. The computer on board will be busy collecting data from the camera and instruments. New Horizons will not be able to turn its antenna back to Earth and start sending information until after Tuesday.

What we will learn, we can only guess right now. Pluto has been full of surprises, ever since it was discovered 85 years ago. That is not going to change.

The encounter with Pluto will be a few days late, but it’s still a nice way to celebrate the Fourth of July.

Response to Ally Award I would like to say a few words concerning the article about the Salisbury Pride Ally... read more