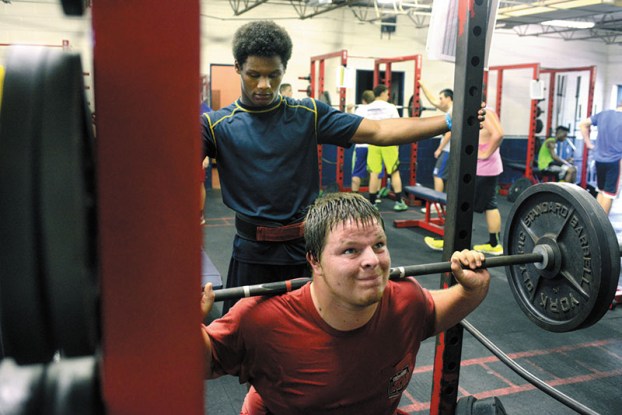 PHOTO BY WAYNE HINSHAW / FOR THE SALISBURY POST Junior offensive lineman Baxter Ketchie works in the weight room Thursday while teammate Max Wall spots. Ketchie and his father Lonnie were in a horrible accident in April. Lonnie Ketchie is still recovering while his son was on crutches for a month. Ketchie is making the move from guard to center on the Mustangs’ offensive line.

GRANITE QUARRY — In recent months, East Rowan offensive lineman Baxter Ketchie has found himself on two very different lists.
The prayer list at Providence United Methodist Church and the most improved player list for Kenneth McClamrock’s football program.
McClamrock is thankful Ketchie is alive. That he’s leading the offensive line this summer as the Mustangs’ new center is just a bonus.
“Baxter was in a wreck that he really should not have survived,” McClamrock said. “I’ve seen the pictures of his dad’s vehicle. It’s one of those big Ford F-350s, and there’s not much left of it. But that vehicle saved their lives. If Baxter had been in his own truck, that little S-10 he drives, he wouldn’t have had a chance.”
The wreck Ketchie and his father, Lonnie, were involved in occurred back in April.
“We were turning out of a driveway, and a guy lost control on a curve and hit us head-on,” Ketchie said. “My dad broke his wrist, broke his sternum, got hurt pretty bad and is still mending from his injuries. I was lucky. I tore the meniscus in a knee, but other than that, I got out with some cuts.”
McClamrock said the Ketchies were struck by a large flat-bed truck traveling in excess of 80 mph. He was told the driver hit his brakes before the collision, but the impact was still staggering.
For people to survive that crash… well, the Ketchies beat the odds.
Ketchie had already made one football comeback — from hip surgery in 2013. Now he’s in the process of making his second one. The 260-pounder was on crutches for a month following the wreck, but he’s making up for lost time.
“He’s given us the level of commitment we’re looking for from all of our players,” McClamrock said.
Ketchie started as a sophomore guard for the Mustangs in 2014 on a team that closed with a rush and won two 3A playoff games to finish 7-7. The only bad thing that happened to Ketchie was getting turned around on a scramble by quarterback Samuel Wyrick and getting stuck with a nickname — “Twinkletoes” — he wasn’t crazy about.
“That was last year’s nickname,” said Ketchie, shaking his head to indicate he wouldn’t mind earning a new moniker as a junior.
McClamrock talked to Ketchie months ago about switching to center to replace graduate Steven Ward. East Rowan put up staggering offensive numbers in 2014, including 3,301 passing yards by Wyrick. A lot of those numbers came during the playoffs when East Rowan’s offensive linemen mastered first-year coach McClamrock’s system.
East Rowan has only two O-line starters back — Ketchie and towering left tackle Sawyer Kimmer.
“The center is our most important offensive line position, and it’s really key for us to have an experienced player there, and that’s whey we’ve moved Ketchie,” McClamrock said. “He’s also our strongest kid, and this puts him right in the middle of things on every snap.”
Ketchie’s development as a center was hindered some by the knee injury sustained in the wreck. He was able to participate in only two of East Rowan’s spring practice days, but he did what he could to learn his new position through watching film and watching practice.
“I don’t have much experience at center, so it’s been an adventure,” Ketchie said. “There’s a lot more responsibility because you have to make a good snap before you carry out your assignment. You’re also making the blocking calls for teammates, so everybody is looking at you. But I’m adapting to the change. I’m working as hard as I can and practice makes perfect.”
McClamrock is thrilled with Ketchie’s progress this summer in competitions against Davie County and Mooresville.
“He’s hungry to do well and he’s taking pride in his new position,” McClamrock said. “He’s taken on a leadership role. He’s not only getting our offensive line going, he’s getting our whole offense going.”

Heavily recruited during her time as a South Rowan basketball star in the 1990s, Tracy Connor trimmed her list of... read more