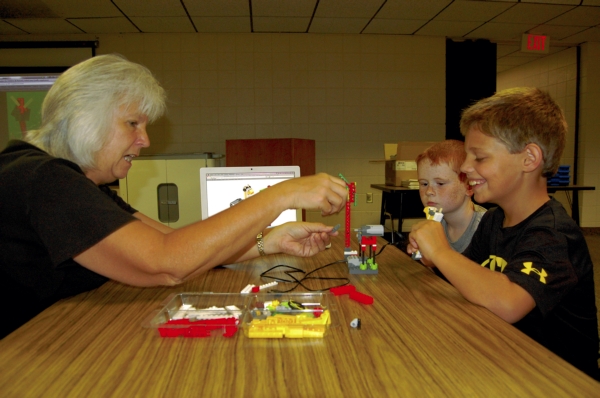 Legos aren’t just for playtime anymore. Those brightly colored, interlocking blocks that cause unbearable pain when stepped on with bare feet are making their way into the classroom.

Not only do they nurture creativity, but they can also encourage math, engineering and technology skills in young learners.

This year, the Rowan-Salisbury School System held two Lego summer camps for elementary students at Horizons Unlimited. The first, designed for rising first through third graders, was June 22-25, and the second one was held July 6-8 for rising fourth and fifth grade students.

By the second day of camp, rising fifth graders Connor Samples and Cohen Self were comfortably throwing out terms like “gear,” “axle” and “motor” and using them with ease in their conversation as they worked together to perfect a motorized Lego robot giraffe.

The students spent the first day building an amusement park – complete with motorized rides they built from Legos. The students were able to control the rides’ motion through WeDo, Lego’s robotics programming software.

“I built The Bullet,” said Justin McDaniel, referring to his model of the popular amusement park ride. “The Bullet went so fast that if you put your finger in there, the whole boom arm would break.”

On the second day of camp, the students created jungle-themed Lego robots.

“I liked the alligator,” Self said

“We made it open up its mouth and roar,” Samples added.

As the pair worked on their motorized giraffe, they explained how they used a motor to turn gears, which in turn made the giraffe move. The boys used WeDo to control those movements.

“We can program it on the computer right here,” Samples said, as he showed how they adjusted the motor’s power and run time. He also demonstrated how to add sounds along with certain movements.

They boys struggled for a few minutes to make the giraffe’s head move the proper amount, as its head kept hitting the table.

“What do you need to change?” asked instructor Becca Glenn. During the school year, Glenn serves as Knox’s Technology Facilitator.

The three of them discussed solutions such as providing less power to the motor, or having it move for a shorter period of time. The boys tweaked the settings on WeDo until they got it just right.

Glenn said she planned for the campers to work on motorized vehicles during the third day of camp.

“I created a theme for the day,” she said, explaining that they start by making builds from a kit. Later on in the day, Glenn moves them on to builds without step-by-step instructions or with more programming complexities.

“I give them something a little more challenging,” she said.

The camps teach students about how gears and models work. The students learn about sensors and how to build an item that stays together.

Glenn said she ran a simplified version of the fourth and fifth grade camp for the first through third graders.

“The first day we did a ‘Madagascar’ theme,” she said, explaining that the students created a zoo first, then added a train to transport the animals to their natural habitat.

The younger campers focused on simple machines and creating figures that would float. They also spent a day learning how to use WeDo.