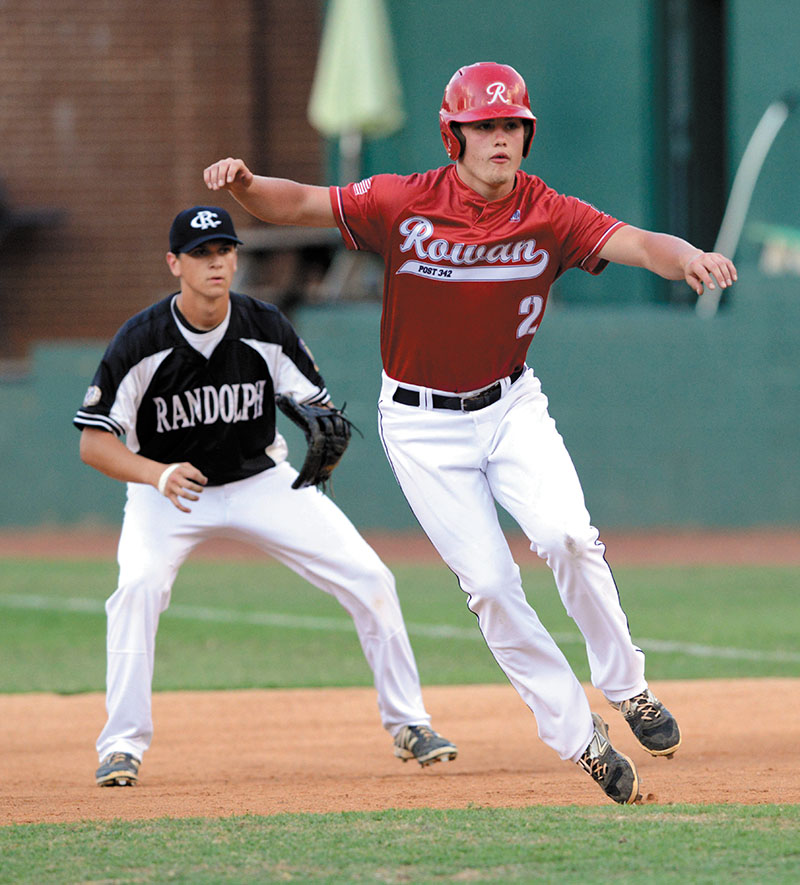 SALISBURY — Rowan County hasn’t run into Randolph County in the playoffs in six years, but two of Area III’s traditional powers renew a rivalry filled with mutual respect when a best-of-five series starts at 7 p.m. Sunday at Newman Park.
“Coach (Ronnie) Pugh and Randolph do everything the right way,” Rowan County coach Jim Gantt said. “When you play Randolph, it’s all baseball, without any of that other crap. Randolph always gets better every day of the season, and we try to the same thing.”
This is the Area III semifinals. The last Rowan-Randolph Post 45 playoff meeting was in a 2009 semifinal series. A victory in that series propelled Rowan on a memorable road that included the Area III title, the state title, the Southeast Regional title and a visit to Fargo, North Dakota, for the American Legion World Series.
Rowan County hasn’t won the Area III playoffs since 2009, but the program, counting the two championships it won as Salisbury in 1954 and 1955, has claimed 17 Area III titles, which is more than anyone. Randolph, counting the six titles it won when it was known as Asheboro, has taken eight Area III championships. Randolph’s most recent Area III title was in 2013.
Rowan County and Randolph County have played twice this season. Randolph prevailed 6-5 in a non-league game at Newman Park on opening night. Rowan jumped on Randolph early and held on to win 12-8 in the league game at McCrary Park in the rematch.
Both games were a little ugly, not an indication of the caliber of baseball both teams are capable of playing at this stage of the season.
“We’ve played Randolph, but I don’t believe we’ve seen Randolph with their Randleman players, and when you add three or four really good players it makes a difference,” Gantt said.
Top-seeded Rowan (20-5) swept Mocksville in the second round, although it wasn’t an easy series. Rowan held on 4-3 in the opener and Mocksville held a lead in the other two.
“The layoff we had between series affected our timing offensively,” Gantt said. “Also, Mocksville pitched well and that had a lot to do with upsetting our timing. Our pitching and defense were good and kept us in games. Pitching and defense gave us time to show patience at the plate and get key hits.”
Rowan has a big rest advantage on Randolph and fresher pitching.
While Rowan finished off Mocksville on Wednesday, fourth-seeded Randolph (23-9) lost two one-run games and didn’t wrap up a grueling, five-game series against fifth-seeded Davidson County until Friday.
Right-hander Omar Bautista (2-1) is scheduled to start Game 1 for Rowan, with lefty Hunter Shepherd (5-0) set for Monday’s Game 2 at McCrary Park. Gantt’s Game 3 starter will depend on how much right-hander Riley Myers (4-0) and southpaw Bryan Ketchie (3-0) are needed out of the bullpen in the first two games.
Area II was scheduled to host the state tournament this year, but declined, and Rowan County, which last hosted the event in 2002, was named as the host team. That means Rowan County will be in the state tournament regardless of what happens in the Area III playoffs.
“We’re in the state tournament, but it’s important for us to play a good team like Randolph County,” Gantt said. “There’s no better preparation than playing someone like that in a series.”
Two more Area III teams will join Rowan in the state tournament.
Second-seeded High Point and third-seeded Eastern Randolph, both excellent teams, start their best-of-five semifinal series Sunday.
If Rowan loses to Randolph, both finalists (Randolph and the High Point-Eastern Randolph winner) qualify for the state event.
However, if Rowan advances to the best-of-three Area III championship series, it gets more complicated. In that case, Randolph and the loser of the High Point-Eastern Randolph play a best-of-three series to determine Area III’s third representative.
After a 2-4 start, Rowan has won 18 of 19. The lone loss in that stretch was to Eastern Randolph.
“It’s important for us to keep winning so we can keep playing,” Gantt said. “All the teams left in Area III are good, but I think we’ve got as good a chance as anyone.”