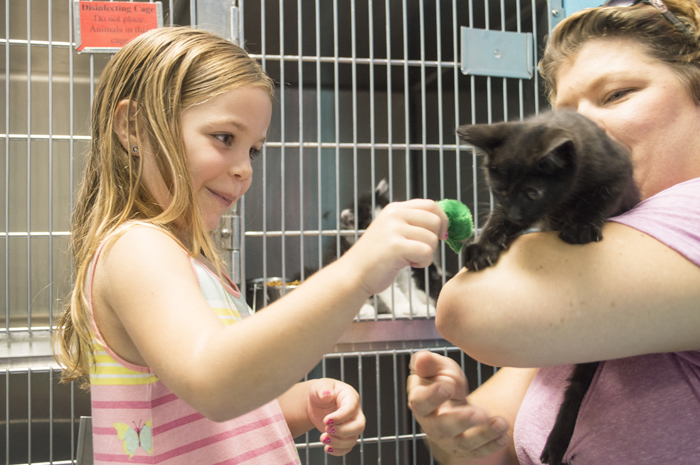 Adoption rates are rapidly improving at the Rowan County Animal Shelter. In fact, June saw the second largest number — 369 — of animals adopted in the shelter’s history. June 2014 sits in first, with 372 animals adopted in one month.

All of the remaining top five monthly adoption rates occurred in the previous year. October 2014 is third at 358 animals adopted. May 2014 is fourth at 356 animals. August 2014 wraps up the top five at 306 animals adopted.

The Rowan County Animal Shelter in 2015 is a stark difference from just four years ago, when it was common for fewer than 100 animals to be adopted in a month. Euthanasia rates at the time were higher than this year’s adoption rates. Years later, it’s the opposite — adoption rates are much higher than euthanasia rates. The number of animals euthanized on a monthly basis is lower than adoption totals from several years ago in the worst months.

But, the latest numbers suggest it’s rescue groups, and not individuals, adopting the largest percentage of animals.

The statistics for June show 70 percent of adoptions were by rescue groups and 30 percent were individuals.

There’s no way to tie the efforts of rescue groups to one particular nonprofit, said animal activist Nina Dix, who helps run the group Shelter Guardians.

“There are so many people involved from so many places that you can’t truly single out any one group,” Dix said.

Instead, she said, it’s likely the increase in adoptions is caused by last-minute rescues of animals who are a day or a few minutes from being euthanized.

Animal groups and individuals post pictures of animals on Facebook that commonly generate dozens or hundreds of shares. Animal activists disagree with shelter staff on some issues, but posting pictures on social media to help animals get adopted is a practice used by both.

“It’s because of the media, being allowed to go in and photograph the animals and show them to the public that things have improved,” said Candace Terry, who helps run the Friends of Rowan County Animal Shelter group.

The pictures on Facebook and social media result in adoptions from individuals and rescue groups. When individuals adopt, animals are able to head straight to a person’s home. Rescue group adoptions could place an animal with a family or a foster home, said animal activist Tracy Waugh.

The Rowan County Animal Shelter, through a task force of community members, recently adopted a number of changes for the current fiscal year, which began July 1. Most of the changes haven’t been implemented yet. The shelter will, however, have extended hours on Saturday starting July 11. Instead of being open from 8 a.m. to 11:30 a.m., the shelter will open at 8:30 a.m. and close at 3:30 p.m., Pannell said.

Regardless of the reason for improving adoption rates and decreasing euthanasia rates at the shelter, it’s clear Rowan is one of the best in the state, according to the Department of Agriculture’s 2014 review of all facilities in North Carolina.

In the report, Rowan’s euthanasia rate is better than every county with similar intake numbers — between 2,000 and 2,500 per year for dogs and cats.

Iredell County’s animal shelter has almost identical intake numbers to Rowan, 2,073 cats and 2,261 dogs. Euthanasia rates, however, are sharply higher. A total of 1,527 cats and 809 dogs were euthanized at the Iredell shelter, according to the report.

The New Hanover County Animal Shelter in Wilmington takes in fewer animals than Rowan — 1,611 cats and 1,649 dogs in 2014 — and has significantly higher euthanasia numbers.

Suggestions for ways to increase adoptions from individuals range from greater transparency to more community events.

“While I do not want to detract from the great work that so many rescues and community members are doing, we need the whole truth,” said animal advocate Leslie Birch.

Birch mentioned readily available euthanasia statistics as one starting point for the shelter.

On Saturday, the shelter, in collaboration with Shelter Guardians, will hold a rabies vaccination clinic, which could help with adoption rates. The shelter will offer a discount on adoptions if animal owners participate in the clinic, which runs from 11 a.m. to 2 p.m.

Allowing animal groups to take additional photos of dogs and cats is another change that’s been suggested multiple times. Currently, the shelter limits the amount of time and number of pictures groups can take.

“If you’ve got citizens and volunteers that are willing, and it’s not costing the taxpayers anything, then why wouldn’t they be able to take as many pictures as they can?” Waugh said.

She proposed the rule as a member of the recent Animal Shelter Task Force, but it didn’t receive support from other members.