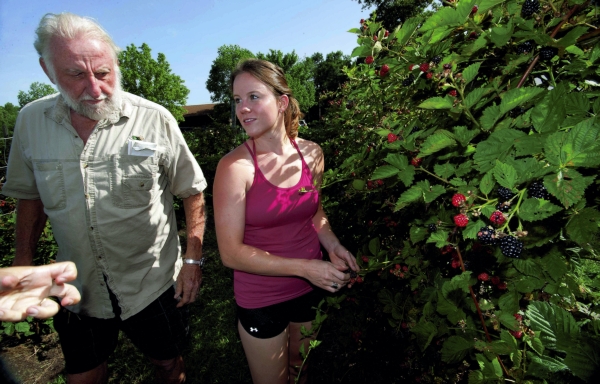 JON C. LAKEY / SALISBURY POST Lisa Hill and her father Terry (left) are gearing up for the first blackberry festival on Saturday. Live music, vendors and blackberry flavored everything will be available to enjoy.

It’s all about blackberries at Saturday’s big festival

HIGH ROCK LAKE — When you talk to Lisa Hill about the many uses of blackberries, it’s like listening to Bubba tell Forrest Gump all the different ways to eat shrimp.

“There’s a lot of things you can do with blackberries, apparently,” Hill says.

Scheduled from 10 a.m.-6 p.m., the Blackberry Festival will have some 75 food, craft and brand-name vendors on hand and plenty of opportunity to pick your own blackberries for $2.50 a quart.

Terry Hill, owner of Hill’s Minnow Farm at 7940 Bringle Ferry Road (about 1.5 miles east of Dan Nicholas Park), has quietly nurtured and built through the years an industrial-sized blackberry patch behind his store that has six 150-foot-long rows of blackberries and five 30-foot-long rows.

The blackberries are so plentiful, you can fill a quart container in about six to eight minutes, Terry Hill says. And you won’t have to walk too far to do it. His 25-year-old daughter, Lisa, has been chief organizer for the Blackberry Festival, which they hope can become an annual event.

“I’ve got signs everywhere,” Lisa Hill says. “We just kind of dove in and did it. I think it has a lot of potential, because a lot of people have said they’re coming.”

There’s no admission, and the Hills have lined up various parking areas that together will accommodate up to 500 cars. Musicians performing Saturday include the Praise Grass Band, Dalton and Liam, Jabe Fisher and Courtney Puckett.

Lisa has been surprised at the interest in the festival, which in a few short weeks has led to 900 likes for its Facebook page.

The Hills will be making blackberry ice cream with their 100-year-old hit-and-miss John Deere engine. Lisa says she has enough ingredients to make 100 gallons. That sounds like a lot, but she routinely produces 40 gallons of homemade ice cream in front of the store every Saturday, and it doesn’t last long.

Lisa says the blackberries are so sweet that she will have to tweak her recipe to scale back the sweetness.

Visitors who want blackberries do not have to pick their own. There are picked blackberries for sale, but they are $4 a quart.

This is the peak time in what is always a short blackberry season, lasting about a month, from late June to late July. The Hills’ blackberries are the Triple Crown variety. People also call them “tame” because there are no thorns to contend with.

Terry Hill started his blackberry adventure when Lisa was a little girl and he couldn’t keep her away from wading into the wild blackberry patches around their house. Believe it or not, he started with only four plants he purchased at Lowe’s.

Each year he kept replanting more shoots, setting more posts and hanging more wire to serve as trellises. Hill’s Minnow Farm has been selling blackberries now for about 10 years.

Blackberries are pretty labor-intensive because they are two-year plants.

The first year they become full, healthy and green but bear no fruit. The second year they bear a lot of fruit but die off after the season is over. Before they’re done, however, they produce new shoots that start the two-year cycle again.

After the fruit is gone, Terry Hill spends a lot of time clearing out the spent plants and training and giving the new shoots room to grow.

“We have to think two years ahead,” Terry Hill says.

The best blackberries for picking are ones which have turned completely black, have big bubbles and pull easily off the plant. The bigger the bubbles, the sweeter they are.

Lisa Hill has never lost her craving for blackberries, and around this time of year, they often constitute a meal for her.

“I eat so many blackberries I don’t even eat supper,” she says.

For help in getting started on the Blackberry Festival, Lisa Hill turned to Patti Safrit, who has gained a lot of experience organizing the Woodleaf Tomato Festival each year.

Hill’s Minnow Farm is in its 50th year of business. Terry Hill’s late father ran it for 25 years, and Terry built the store in 1990 and has overseen the operation since then. He says he hopes the community on this end of Rowan County will like the festival.

“It’s going to be chaotic, but I think we can do it,” Lisa adds.