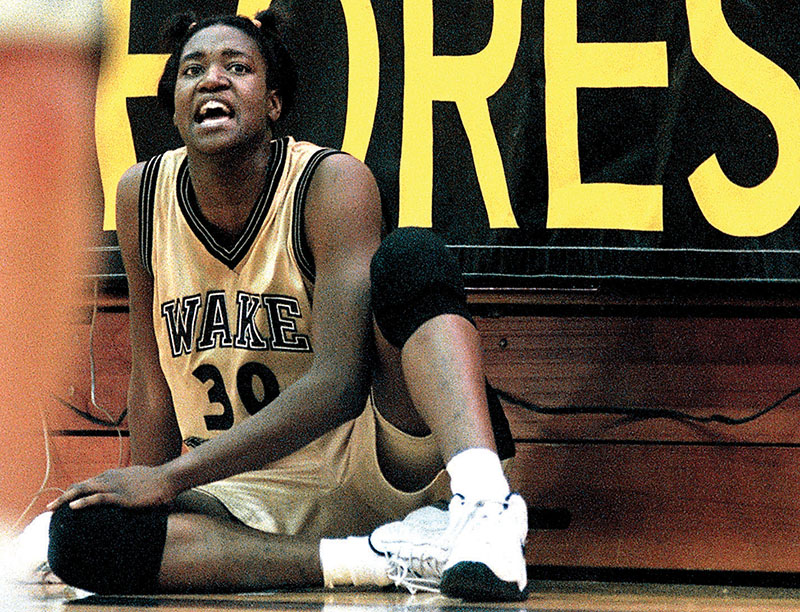 SALISBURY POST FILE PHOTO Tracy Connor, a South Rowan graduate, will be inducted into the Hall of Fame at Wake Forest in October.

Heavily recruited during her time as a South Rowan basketball star in the 1990s, Tracy Connor trimmed her list of college finalists to Virginia, Stanford, Duke, Clemson and Wake Forest.
“Wake Forest was absolutely last on that five-school list because my recruiting visit there was a comedy of errors,” Connor said from Texas in a phone interview. “But Wake Forest had to be on my list, partly because it was so close, partly because I’d gone to camps there for six years, and partly because I knew the coach.”
Connor’s family left the decision up to Tracy, but her father, Benny, offered a bit of advice. He told her to research the post players each school had coming back and to think about what she could add to that team as a freshman.
Connor woke up the morning she was signing still believing she was a future Virginia Cavalier. But she placed two National Letters of Intent in her book bag before she headed to school — one from Virginia, one from Wake Forest.
“And then I signed with Wake Forest,” Connor said with a chuckle. “I still can’t tell you exactly why I did, but I really was blessed. It worked out.”
It worked out so well Connor will be inducted into the Wake Forest Sports Hall of Fame in October.
She starred for the Demon Deacons from 1993-97, with her career virtually coinciding with that of another Wake Forest post player — Tim Duncan, her favorite athlete. Connor scored 1,619 points (still sixth all-time at Wake Forest) and pulled down 906 rebounds (third).
She was only healthy two seasons, her freshman season when she was a Freshman All-America and ACC Rookie of the Year and her senior season when she was first-team All-ACC.
There were shoulder, foot and knee injuries, and knee surgery forced her to redshirt the 1994-95 season. Still she led Wake Forest in scoring and rebounding all four seasons she was on the floor. She posted 42 double-doubles, including a 35-point, 22-rebound effort as a freshman against N.C. State.
“If you could take away the injuries, I would like to have seen what the slate would’ve been,” Connor said. “There were a lot of physical challenges, but it was still a great ride. All those setbacks were for a greater purpose. I learned so much. Dealing with the injuries and coming back from the injuries completed the person I am today.”
Criteria for induction into the Wake Forest Hall of Fame include being out of school 10 years, receiving national recognition and being of good character and reputation.
Connor has been out of school 18 years, so the call from Wake Forest came out of the blue.
“It’s kind of hard to believe,” Connor said.
Connor was honored as a “Legend of the ACC” and entered the Salisbury-Rowan Hall of Fame in 2008.
She started playing basketball when she was 8.
“Everyone on my dad’s side of the family is tall,” said Connor, who grew to 6-foot-3. “My grandmother was 6-2, my uncle was 6-8, my dad is 6-4 and I had an older sister who played before me. Basketball was a natural thing for me to do.”
Connor still owns the two highest-scoring seasons in South Rowan history — 542 points in 1989-90 and 518 in 1990-91. She scored 1,465 points in three varsity seasons and led the Raiders to the three best seasons in program history — 26-3, 24-3 and 23-5. She was a perennial county and conference player of the year.
Connor also excelled in track with a rare blend of size, strength and coordination. In 1992, she won the 4A state title in the discus and shot put. In 1991, she was fourth in the high jump.
“Playing for South Rowan was a great time in my life,” Connor said. “I don’t remember any scores, I remember the fun I had playing with my teammates. I’d sit in class all day, trying hard to focus. I just couldn’t wait for the next practice or the next game.”
Connor has been a Hall of Fame person since her playing days ended.
She has a busy life. Her family includes three growing boys, an 11-year-old and a pair of 9-year-olds. She’s a physician assistant and works for St. Jude Medical.
“I’ve always enjoyed taking care of people,” Connor said.