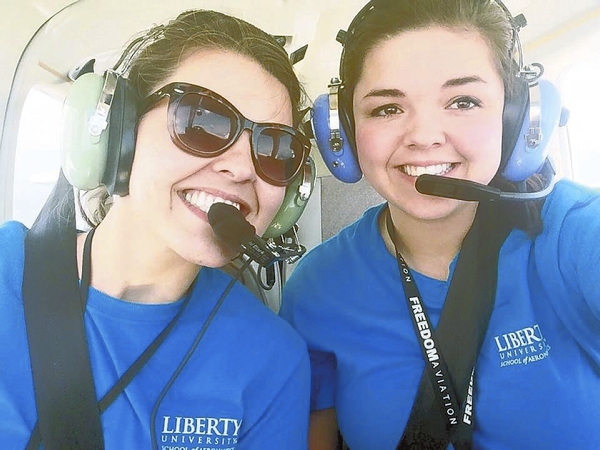 Allen poses in front of one of Liberty’s airplanes. Submitted.

Only a few years removed from receiving her driver’s license, 19-year-old Kaitlyn Allen has already obtained her private pilot’s license and is well on her way to earning her commercial pilot’s license.

The West Rowan High School graduate is currently pursuing a degree in commercial and corporate aviation at Liberty University.

Allen said her passion for flying grew out of her love of travel.

“I didn’t get interested until later in high school,” she said. “I wanted to travel.”

Allen’s dad suggested that she look into getting her pilot’s license. She did, and she hasn’t looked back since.

During her college search, Allen looked at several aviation schools, but once she stepped onto Liberty University’s campus, she “didn’t look anywhere else.”

“It was a really good mix for me,” she said.

Commercial aviation is an academic major at Liberty, just like history, psychology or biology. Allen is required to take core academic classes, as well as aviation classroom courses. These classes are accompanied by flights with instructors.

Allen works her flights in between her academic classes and her job working as a dispatcher at the airport.

Allen recently competed in the Air Race Classic, an annual race for female pilots. Starting in Fredericksburg, Virginia and ending in Fairhope, Alabama, the course created a star-like pattern across the eastern United States.

Allen and her copilot, Natalie Waters, made up one of two teams from Liberty University, dubbed the Liberty Belles.

Allen said she and Waters split the piloting responsibilities down the middle of the cockpit. Waters manned the radios, navigation and fuel consumption, while Allen flew the Piper Arrow, a single-engine complex aircraft.

“I did nothing but fly,” Allen said.

The two finished a day early, flying roughly 2,400 nautical miles in three days with an average speed of about 149 miles an hour.

Competitors ranged in age from 18 to 80 years old. While there were several other collegiate teams, most teams were comprised of middle-aged women, Allen said.

She said competing in the race gave her the opportunity to meet and network with successful female pilots.

Being a female pilot is rare, but it’s career field growing in popularity, she said.

“You’re definitely in the minority,” Allen said. “The guys kind of run the airport.”

She added, however, that she doesn’t see much discrimination.

After college, Allen said, she plans to teach aviation classes until she has enough flight hours to apply for a position at a commercial airline.

The biggest plane Allen’s flown is a Piper Seminal, the biggest one in Liberty’s fleet.

Most pilots don’t fly bigger aircraft until hired by an airline, she said, adding, “Airlines train their pilots for the specific aircraft that they fly.”