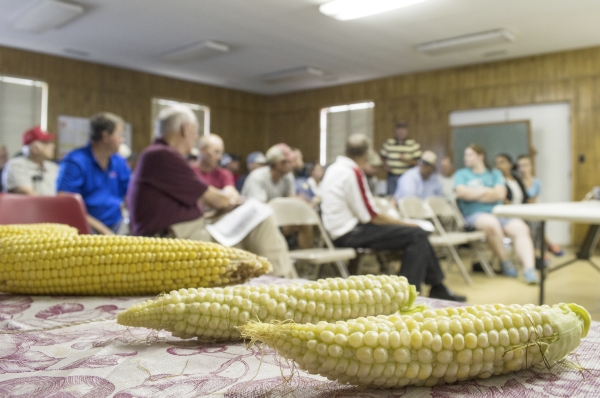 Josh Bergeron / Salisbury Post - Different levels of drought stressed corn sit on a table at the Piedmont Research Station as farmers and agriculture professionals talk about how to addressed a projected decrease in crop yields.

The Piedmont Research Station may partially fill a revenue hole in some local farmers’ budgets, created by a drought that’s lowered projections for corn yields across Rowan County.

During a drought-focused meeting on Wednesday, the research station announced it would purchase up to 800 tons of corn from local farmers as a result of sharply lower rainfall totals in 2015. The announcement came at the end of a meeting where state officials offered advice to a crowd of farmers about saving drought-stressed corn. Two presentations given by N.C. State University professors during the meeting focused on potential fungal problems on drought stressed corn and whether dangerous levels of nitrate would be present in some corn crops.

As of July 2, all of west Rowan remains in a “moderate drought,” according to the U.S. Drought Monitor’s latest update. The eastern portion of the county, however, is labeled as “abnormally dry.” Corn is most severely affected by the weather conditions. It’s also the largest commercially produced crop in Rowan, according to many estimates.

Recent rains have slightly increased rainfall totals, but won’t make a difference for corn, according to local farmers. Corn requires rain during a specific portion of its growing season for optimal output.

The net result for corn producers in Rowan is likely decreased profit margins for the 2015 growing season.

But, farmers aren’t the only ones hurt by the drought.

The research station also expects decreased yields, and would need to fill its gap by purchasing 750 to 800 tons of corn, said Correll Hall, who works at the research station. Hall said the campus would turn to local farmers to fill the gap. Farmers will be allowed to submit prices for their corn, he said. The Piedmont Research Station will wrap up the bidding process and choose successful bidders in one week. More than one farmer could be chosen.

“Rather than wait, and try to catch up when we could have another year like this next year, we’re considering buying feed,” Hall said. “And, our bosses in Raleigh have approved that purchase.”

The Piedmont Research Station would cut the corn and transport it,  Hall said. Travel costs will be factored into the decision.

The announcement was one of several pieces of positive news offered to farmers at the meeting.

Using local samples of corn as examples, corn specialist Dr. Ron Heiniger, who teaches at N.C. State University, said Rowan County’s lack of rain is an early drought for many farmers. As a result, there’s less chance that nitrates would reach dangerous levels in corn crops.

Elevated nitrate levels can be toxic to animals. Symptoms of nitrate poisoning include labored breathing, loss of weight and lack of appetite, according to Heiniger’s research.

Discussion about elevated nitrate levels focused on corn silage, which is commonly used for animal feed. Silage can be made from green vegetation that has fermented over a period of time.

Purple discoloration on corn stalks could represent elevated nitrate levels, he said. Heiniger stressed during the meeting that farmers should cut corn immediately following a rain storm, as it would result in increased nitrate levels.

He encouraged farmers to have multiple samples of their crop tested if they had doubts about whether nitrate levels were elevated.

Livestock specialist Shannon Davidson spoke after Heiniger, and much of her presentation focused on the possibility for fungus or toxins to form on drought stressed corn. Fungus may not necessarily lead to toxins forming in corn. As a result, Davidson showed several examples of potential toxins, including the olive green, powdery alfatoxin — occurring relatively commonly in  corn crops.