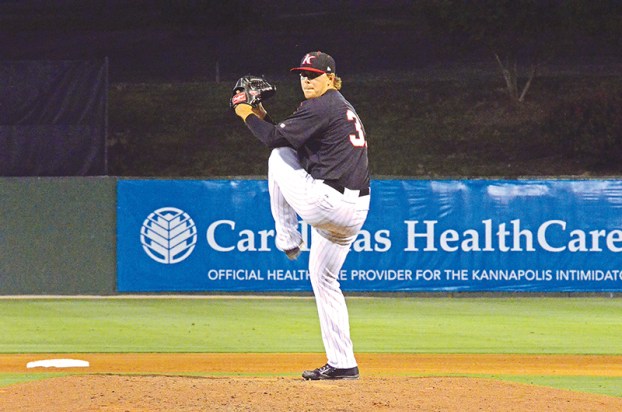 COURTESY OF KANNAPOLIS INTIMIDATORS Kannapolis' Jacob Morris has done well since making the transition from outfield to relief pitcher. Morris is 3-2 in 21 relief appearances. He's struck out 33 batters in 30-1/3 innings with 25 walks and a 5.93 ERA.

Intimidators: The transformation of Jacob Morris

KANNAPOLIS — Rarely do pro baseball players have the opportunity to completely reinvent themselves, but that is exactly what Kannapolis Intimidator Jacob Morris is doing.

When last season ended Morris, 24, was a regular outfielder for the Intimidators appearing in 132 games with 36 doubles, eight homers, 44 RBI’s and 12 stolen bases. Decent numbers, but he also hit just .220 and led the Low A South Atlantic League in strikeouts with 179.

“I was swinging and missing too much,” said Morris, a 24th-round draft pick by the Chicago White Sox out of the University of Arkansas. “I had an OK year but did not do as well as I wanted. Strikeouts were definitely an issue.”

Something had to change. What the White Sox had in mind was dramatic. During the final week of the 2014 season, the player development brass sat down with Morris and asked him if he wanted to become a pitcher.

“They brought it to me, and I talked it over with my family and the coaching staff,” Morris said. “Then I thought about it a little bit more and I decided I should do it.”

Morris has been playing baseball since he was 5 but over the years he developed into a slugging, switch-hitting outfielder, first at powerhouse Coppell High School in Dallas, Texas, then at Arkansas where he played three seasons including a 2012 College World Series appearance. After the 2013 draft, Morris spent his first pro season at Great Falls (MT) in the Pioneer League where he batted .246 with 12 homers and 33 RBI’s. But he also fanned 97 times.

In high school he pitched some for Coppell then he also threw a little in fall ball at Arkansas. So what was it about the 6-foot4, 215-pound Morris that made the White Sox think he would make a good pitcher?

“The thing about Jacob is he has a great arm in the outfield,” said Intimidators manager Tommy Thompson. “A lot of guys don’t have a chance to go to the mound because they don’t have the arm strength or the body size. Jacob has both.”

Normally, a new minor league pitcher would spend a lot of time in extended spring training and the instructional league, developing and refining his skill. That was not the case for Morris. He was so impressive and effective in spring training, the White Sox brought him straight back to the Intimidators to start the 2015 season.

“He has transitioned really fast,” Thompson said. “For him to break spring training and come straight to us is like a miracle. He might have thrown three innings in instructional league, but he continued to work on his mechanics, his delivery and all the things we asked him to do. His work ethic is as good as anybody I’ve ever seen.”

Morris has good velocity and good command on three pitches: fastball, breaking ball and a change-up. He also has the mental makeup it takes to be a good pitcher at the professional level.

“I don’t care how they want to use me,” Morris said. “I just want to get out there. I want to do my job wherever they need me.”

So how has the transformation gone so far? Morris made his first appearance in the second game of the season on April 10 against Lakewood. It didn’t go so great as he gave up two hits, two runs and blew a save in one inning. But on April 21, he notched his first professional win with a one inning, one hit, one strikeout effort against West Virginia.

Now halfway through the season, Morris has made 21 appearances, pitching 31-1/3 innings with a 5.74 ERA and 35 strikeouts. His record is 3-2. Thompson has used him in middle relief, in late-inning hold situations, and in save situations.

“The stats don’t mean that much to me,” Thompson said. “He has pitched really well in his first year of pitching for us. He has come in for us in all situations, and his mindset is really solid. He is a man, and he is in a really good place.”

Minor League baseball is all about potential and development. Morris fits the mold because of his size and athletic ability. Uniquely he was drafted three times, once after high school, once after his redshirt sophomore year at Arkansas and finally by the White Sox after his junior year. He had completed his communications degree at Arkansas by then so he felt it was time to pursue a career as a baseball player. It may not have evolved the way he first thought, but the conversion to pitching has opened a whole new door for him.

“It has had its ups and downs so far,” Morris says of the transformation. “I am still learning, and I understand it is a process. I have just got to keep getting better.”

So, will the new pitcher ever get a chance to be a pinch hitter? Morris says it would be “fun and cool” but Thompson pretty much said no, unless he screwed up and used all of his hitters in a 15-inning game.

With Morris, however, you can never rule anything out on the baseball field.

From staff reports Former Salisbury High golfer Eric Edwards made a hole-in-one Wednesday during his practice round for the Carolinas... read more