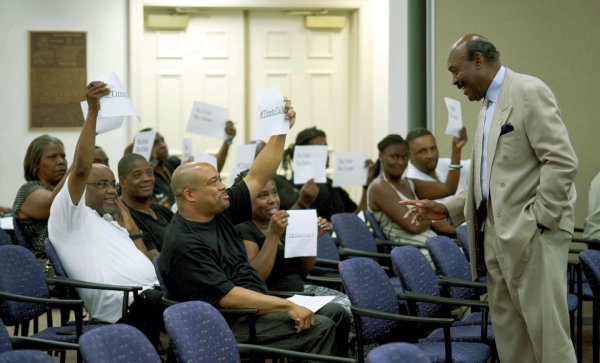 JON C. LAKEY / SALISBURY POST Former Councilman Pete Kennedy (right) stops to speak to a group of citizens before council members headed off into closed session. Several people came to a regularly scheduled Salisbury City Council meeting in July 2015 to make an appeal to discuss the Confederate monument known as "Fame" that is in the median of West Innes Street.

At the end of the meeting, as Mayor Paul Woodson promised “we will give this full consideration,” those gathered held up small signs. Some said “No Fear/No Fame,” while others said, “#TimeToTalk.”

Many Salisburians refer to the monument as the angel statue or “Fame,” the winged muse which dominates the bronze grouping.

Anticipating the audience would include people with concerns about the 106-year-old monument, dedicated at its present location in 1909, Woodson read from a prepared statement.

“We have received a number of communications calling for some action by the city of Salisbury in response to the massacre of nine black worshippers at their church in Charleston, S.C.,” Woodson said. “Many have questioned the prominent place where the Confederate statue is currently located.

“We know that this is an issue of the upmost importance, and the council will work diligently to seek a solution. As of now, we have not progressed to a point that any productive public discussion could be accomplished.”

The Rev. Anthony Smith of Mission House and the Rev. Robin Tanner, a lead minister for the Piedmont Unitarian Universalist Church, relied on social media, telephone calls and conversations to encourage people with concerns about the monument to attend the council meeting and, as Tanner said, open up a community conversation about its origins, ownership and meaning in 2015.

Smith said after the meeting Salisbury City Council should be the body to facilitate that community discussion. He described them as “stewards of the narrative.”

Smith stopped short of saying the statue has to be removed, but he said one also has to understand the racial terror that existed in 1909 when the monument was erected and all the events that have happened in the 106 years since then.

Tanner said the monument can no longer be viewed as just a piece of art, or just a monument. Symbols evolve, and history changes how they are viewed, she said.

“I think the end game is reconciliation,” Tanner said.

Smith and Tanner said it’s difficult to say what the future of the monument is before the community has a conversation about it. Tanner said there are models for how that conversation can take place, and other Southern cities have taken paths to truth and reconciliation.

“Silence has power,” Tanner said. Without engaging in this important discussion, she added, the city would be handing over the power, voice and promise of the community “to whoever drives into town next week.”

Whitney Peckman, who also attended the meeting, said a discussion about the monument is an opportunity to come together and talk about what history means. “It means different things to different people — that’s obvious,” she said. “The Confederate statue is not the only heritage in Salisbury.”

Until the community publicly acknowledges African-American contributions, “we aren’t a community,” Peckman said. She added the city has waited 100 years too long to have a conversation about the statue, dedicated to Confederate soldiers.

Ken Hardin, an announced City Council candidate this year, had a prepared statement ready to deliver, but a public comment period was never offered Tuesday.

Hardin said he cautioned the council at a May 19 meeting that “our city was at a tipping point.” Emotionally charged demonstrations by opposing groups in the downtown then followed after the Charleston shootings, he said.

“My question and concern is,” Hardin said, “why did we have an atmosphere so ripe and inviting that people felt comfortable enough to stage a pro-flag rally, and another group was so outraged and frustrated, they held a counter rally?”

Hardin said he has met with Police Chief Rory Collins on several occasions and also has talked at length with City Manager Lane Bailey and Human Resources Director Zack Kyle. He said he appreciated their willingness to discuss the issues and possible solutions.

“I expressed to them,” Hardin was ready to say in his statement, “I’ve grown weary of attending recurring discussion meetings and leaving without actionable items to work towards. I asked the group if we could come up with three things to put in place and recognize success.”

Council sets aside a time for public comment in its second meeting of each month, and Woodson suggested that council’s July 21 meeting will be an opportunity to hear concerns about the monument.

“We’ll listen,” he said of the upcoming meeting. “and we’ll just decide what the next step should be.”

Woodson said representatives of the United Daughters of the Confederacy, owners of the statue, need to be brought into the discussion. He added the city’s attorney is looking into questions around a 1908 city resolution in which aldermen and Mayor A.H. Boyden spelled out where the UDC could place the statue in perpetuity.

That resolution is recorded in the Register of Deeds office.
The city minutes from that Aug. 6, 1908, meeting are missing, according to City Clerk Myra Heard.

The Carolina Watchman newspaper printed the entire city resolution designating the land for the Confederate monument — the same one recorded in the Register of Deeds office — in its Aug. 12, 1908 edition.