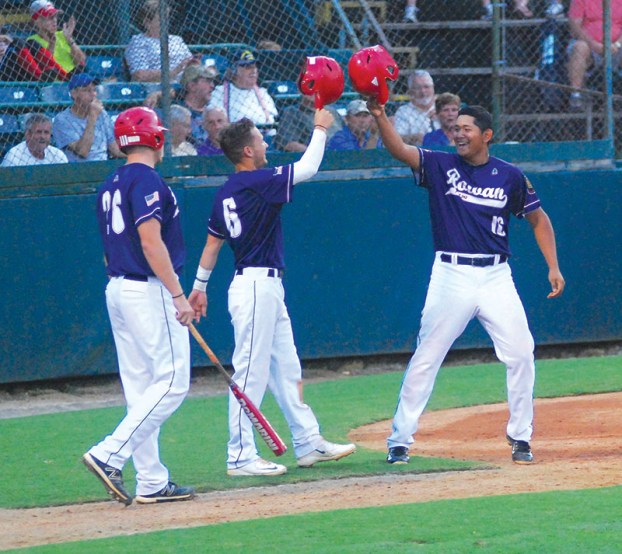 SALISBURY — All the higher seeds won on opening night of the second round of the Area III playoffs.
Three top dogs barely broke a sweat, but top-seeded Rowan County had to survive a pulsating 4-3 struggle at loud Newman Park against underdog No. 9 Mocksville-Davie.
Rowan County (18-5) has won 16 of its last 17 games and took a 1-0 lead in a best-of-five series that continues Tuesday at 7 p.m. in Mocksville.
Mocksville is 7-2 in its last nine outings.
“Fun game, playoff atmosphere,” winning pitcher Bryan Ketchie said. “Mocksville hit the ball all night, but we had good offense too.”
Ninth-seeded Mocksville (10-16) hit the ball harder and more often than Rowan, smashing 11 hits and quite a few lineouts.
“We out-hit them, but we didn’t out-hit them in the clutch,” Mocksville coach Charles Kurfees said. “We played decently, but our RBI guys just didn’t get it done tonight.”
Rowan had only six hits against Mocksville hurlers Connor Clark and Brad Dzeskewicz, but two of them came at optimum moments.
Hunter Shepherd whipped a triple into the right-field corner between Dustin Ritchie’s walk and Jeremy Simpson’s sacrifice fly. That meant two Rowan runs for a 2-0 lead in the second.
With Rowan leading 2-1 in the fifth, Riley Myers rifled a double into the wind and off the left field wall following walks to Michael Caldwell and Juan Garcia and a wild pitch. That extra-base wallop provided Rowan’s other two runs.
“Runners second and third, and they’ve got the infield in,” Myers said. “I was just trying to get something in the air, and I barreled it.”
Ketchie shut out Mocksville for four innings with help from Harrison Baucom, who threw out Neil Hutchens trying to go first-to-third on Charlie Muchukot’s single to right field.
Mocksville broke through in the fifth when Hutchens scored on Barrett Hennings’ single to right. Hutchens would’ve been out at the plate, but Rowan catcher Dustin Ritchie couldn’t hold the ball.
Mocksville scrapped within 4-3 in the sixth when Nick Wilson homered to start the inning, and Hutchens, who has been a 10-for-13 terror in the playoffs, singled home Kenny Overfelt with two men out.
“We went up 4-1, and Ketchie lost his focus a little bit in the sixth,” Rowan coach Jim Gantt said. “But he pitched well. He gave us seven innings.”
Ketchie’s best pitch was his curveball.
“I threw it on a lot of 3-2 counts and got big outs with men on,” Ketchie said.
Ketchie protected Rowan’s one-run lead in the seventh. Then East Rowan youngster John Owen relieved and got three groundball outs in the eighth.
“Owen went in there and pitched like a seasoned veteran,” Gantt said.
Myers, normally one of the Rowan’s starters, took the ball in the ninth and got three more groundball outs to earn a save.
“I’ve been prepared to close a few times this year, but we haven’t had many close games,” Myers said with a smile.
But this one was close, closer than just about anyone expected.
“Mocksville swung it well, and they’ve been playing very good baseball lately,” Gantt said. “We were happy to win a one-run game.”
•
NOTES: Kurfees headed immediately after the game to Baptist Hospital in Winston-Salem where his mother-in-law was airlifted Monday afternoon following complications from a heart catheterization. … Mocksville played tighter defense and was more aggressive on the bases than in its first-round series with Southern Rowan. Mocksville third baseman Colby Cranfill made a terrific play in the eighth. … Gantt said Omar Bautista will start Game 2, with Shepherd on the bump for Wednesday’s Game 3 at Newman Park. … Weather shouldn’t be a factor for the next few days.