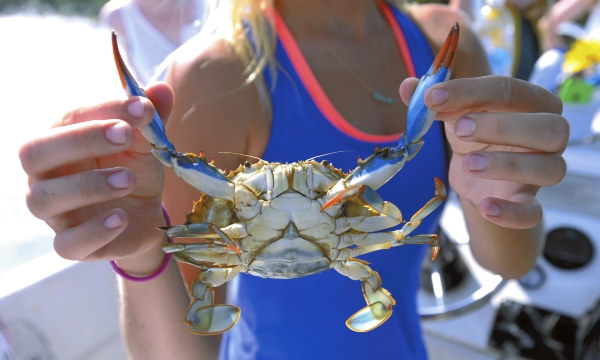 Naturalist guide assistant, Kacey holds a female blue crab pulled from one of the waterways near Capers Island. The basket had 4-5 blue crabs captured. photo by Wayne Hinshaw, for the Salisbury Post

Isle of Palms, S.C. —  Let me invite you, by way of this column, to take an eco naturalist guided nature tour to the beach of Capers Island. We will cruise by boat through the tidal creeks, salt marshes and the inland waterway to the pristine barrier island known as Capers Island Heritage Preserve. No one lives on the island, whose front beach is know as the “boneyard.” More about the “boneyard” later.

If you don’t mind, I am taking you with my family on this ecosystem excursion.

Usually I don’t take my family with us on most of my columns, but in this case, it is why I am going. All 15 family members and you will crowd onto a skiff captained by naturalist Shane Zieler. He has spent years taking groups into the low country, barrier islands and into the back creeks and marshes studying the marsh ecosystem.

As we board, be sure you have your cap or hat and sunscreen. The temperature is 96 degrees under the burning South Carolina summer sun. Get your lifejacket and take a seat on one of the benches around the edges of the boat. We are off from the Isle of Palms Marina on a day of excitement.

Speeding across the water in the Inland Waterway, with water splashing on us as we ride, Zieler tells us that the waterway runs from Florida to Norfolk, Va. Look closely, and you will see endangered brown pelicans skimming the water in search of food. Over in the wetland grass, a white egret looks our way. An osprey goes about her business in her nest atop a signal pole.

The first stop is a wild oyster bed on the bank of the wetlands. The tide is out so we can see the entire colony of oysters clinging to the bank. Naturalist Zieler holds a cluster of oysters for our view. Oysters are not in season, so we can’t open the shells and sample the taste of this delicacy.

Moving on, Zieler suggests we check his blue crab basket. The kids enjoy pulling the big mysterious basket from the depths of the salt water. When the basket surfaced and they spied 4-5 crabs in the basket there was a unified “Ooh” and then quietness. Kacey, Zieler’s assistant, reaches for a crab holding it up with claws spread. Seeing a female blue crab up close, her claws are a pretty blue color leading out to her pinchers. She is ready to have young crabs so we put her back in the water.

After a few more bends and turns in the watery creeks, we stop to fish. For the kids, this was the highlight of the trip.

I didn’t ask, but I hope you like to fish.

Zieler promised we would catch some sharks. With shrimp bait on the hooks, 5-year-old Audrey quickly pulls in a foot-long shark. As dangerous as an adult shark can become, the young sharks are very pretty. Their bodies are  streamlined like rocket ships. Touching them, they are soft and smooth. Their eyes have a strange slit running up and down instead of left to right, and of course their famous mouth full of teeth. The teeth are very small at this age, but there are plenty of them. As they grow, they will lose their teeth and grow new ones over and over again.

In rapid succession, everyone started catching fish. My niece’s 10-year-old son prided himself by calling himself the “Shark Man” before we left shore. Shark Man would have nothing to do with the sharks, not even a one finger touch. He did catch a croaker fish and was thrilled.

About 12 young sharks, a croaker, and a sea bass were caught as was a stingray. Zieler had to remove the stingray from the hook, saving us from being stung. All of our catch was tossed back into the water.

Onto Capers Island where raw chicken was used for bait to lure blue crabs into the crab nets. Assistant, Kacey,  showed the group how to catch the crabs in the nets. The family scattered up the beach crabbing, while Zieler cooked a “low country boil” of fresh shrimp, sweet corn on the cob, potatoes, onions and smoked sausage there on the white sandy beach for our lunch.

I hope you like the “low country boil.” The children only eat hot dogs.

You can come with me. We will slip off up the 3 miles of undeveloped beach to the “boneyard.” Let me explain the “boneyard.”  The old trees that used to grow down to the water’s edge have fallen due to erosion. The beach has been eroding away 15 feet per year since 1875, I am told. As the trees and stumps die and fall into the salt water or on the beach, they look like skeletons after the hot sun bleaches them white. I am thinking how pretty they are as my mind rushed to thoughts of being on a deserted island.

The beach looks like a foreign planet or a desert island with all white tree “bones” lying around in the white sand. The textures in the sand are fascinating. As the tide receded back into the ocean, small ripples are left in the sand. The little two-inch-tall ripples cast their shadows when the sunlight hit at just the right angle. Very pretty!

I read that the Seewee Indians had a village on the island. Then the French brothers of the Capiers family lived here for 175 years until the Civil War. The island has been called Sessions Island and Capore Island. The state of South Carolina purchased the island in 1975 for $2.8 million and set it aside as the Capers Island State Heritage Preserve in 1977. It can only be reached by boat and has no residents.

Let’s get back with the family and eat that “low country boil.” They have started eating without us.

As we board the skiff for the ride back to the marina, Zieler says that we might see some dolphins and tells us to stay alert. Not far from the island, he slows the skiff to a stop and we see 6 bottlenose dolphins swimming near the boat. Zieler told us that these S.C. dolphins have learned that if they work together as a team, they can run a school of fish out of the water up on the bank. The dolphins will then go to the bank and eat the fish. Studies have shown that they are the only dolphins in the world known to have learned that feat.

Time to head back to the marina. I hope you have enjoyed your adventure with my family on our trip to Capers Island.

David Freeze: A few wrong turns and lots of right ones