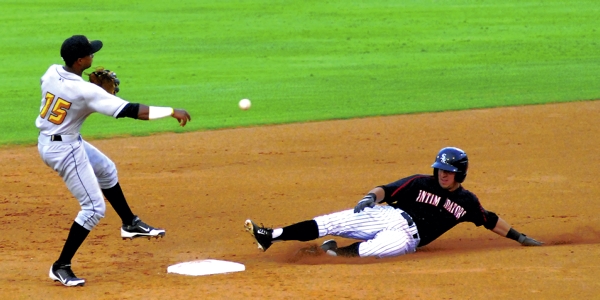 KANNAPOLIS —No one has to tell John Ziznewski how fortunate he is. The 24-year old Intimidators’ infielder already knows.

Opportunities are few and come with ever-present expiration dates for fourth-year college players selected in the eighth round, so Ziznewski is making the most of his.

“I’m here to learn and improve,” he said before a recent home game at CMC-NorthEast Stadium. “And trying to get better at everything — defense, hitting, hitting the ball hard and not giving up any at-bats.”

Ziznewski, who signed with the White Sox out of Long Island University a year ago, is slowly emerging from the shadows of minor league doubt. Through Saturday he was batting .281 with nine RBIs and four stolen bases in 21 games since arriving from extended spring training in late May.

“We like him,” jovial manager Tommy Thompson said. “He’s brought excitement. He’s played good defense. He’s hit the ball extremely well. He’s someone who hasn’t had a chance to play every day, but he’s earned the right to play.”

Ziznewski has the sinewy body of a middleweight — six feet and two inches spread like silk over a 190-pound frame. He grew up in Staten Island, N.Y., was the 2014 Northeast Conference Player of the Year for LIU and found himself embracing professional aspirations.

“I actually thought I was going to the Red Sox for a minute,” said Ziznewsi, a lifelong Yankees fan. “I went to a few workouts and they seemed interested. I would have been happy with that. But this organization has treated me really well.”

He was taken with the 228th overall pick and assigned to Great Falls in the short-season Pioneer League, where he played shortstop, third base and first base. He hit .243 in 43 games last summer and earned a promotion to Kannapolis, where he made an immediate impact by hitting .306 in his first 12 games.

“I was aggressive early in the count,” Ziznewski explained. “I was seeing the fastball and not taking pitches that I knew I could hit. A lot of times I was just jumping on the first pitch if it was there.”

Thompson certainly noticed. It wasn’t long before he began penciling Ziznewski’s name into his starting lineup — nine times at first and 10 at third. Along the way JZ has become a talkative clubhouse leader, a conduit of confidence and energy in the I’s locker room.

“Very entertaining guy,” Thompson said with a sideways smile. “In the dugout, the locker room and on the bus. He’s a funny guy, the Will Ferrell of our team.”

More importantly, Ziznewski has worked his way into the equation. He scored the winning run in his Class A debut and stroked three hits in a 13-5 win against Delmarva on June 18. And though he’s yet to connect for a home run, his double in Saturday’s 1-0 victory at Augusta was his seventh of the year and the Intimidators’ only extra-base hit.

“He’s swinging a hot bat right now,” said teammate Ryan Plourde. “And his defensive game is off the charts. He’s just an all-around great player, helping himself with the bat and in the field.”

Where that takes Ziznewski remains an intriguing question. This much is certain: the White Sox are keeping him a short leash, monitoring his every move.

“He’s been good wherever we’ve put him,” Thompson said. “It’s been nice to put him in the lineup and see him have some success.”

For that, Ziznewski feels fortunate. “I’m very grateful,” he concluded. “But I’ve also got to do my part and continue to play well.