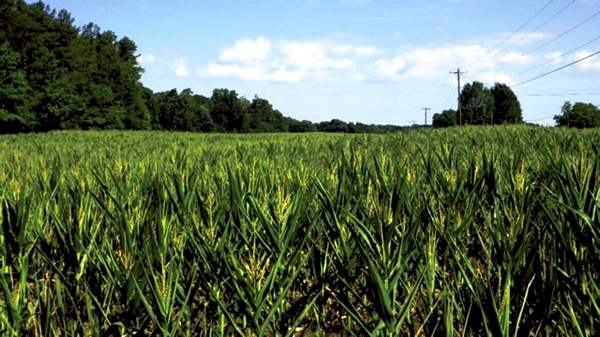 Corn crops in Enochville have suffered because of the dry conditions. Photos by Robert Stirewalt.

Mother nature hasn’t been kind to farmers during the 2015 growing season.

Across Rowan, farmers, especially those who grow corn, report significantly below average rainfall totals. Rain totals in most areas of Rowan measure less than 3 inches since April. The lack of precipitation most noticeably stunted growth of commercial corn crops, resulting in significantly decreased projections for corn yields at the end of the growing season.

The National Drought Mitigation Center has declared much of the Piedmont and all of Rowan County in some type of drought as of July 2. Most of Rowan is in a moderate drought, according to the center. The triangle-shaped tip of eastern Rowan is described as moderately dry.

“The most immediate situation is the impact on the corn crop,” said Piedmont Research Station Superintendent Joe Hampton. “Corn has needed moisture the last six or eight weeks to develop a stalk. Because it did not get that moisture, in many fields there won’t be a corn crop.”

By now, corn usually towers taller than cars and most people. Instead, corn across Rowan barely reaches waist height for most.

Rowan’s corn crop isn’t significant enough to affect prices at grocery stores, Hampton said. Instead, the drought will likely have a direct affect on the income farming families are able to generate from a crop that’s estimated to be the largest, single row crop in Rowan.

As a result of the drought, Rowan County Cooperative Extension and the Piedmont Research Station will have a meeting with farmers in the area on July 8 at the research station on Sherrills Ford Road. The meeting will function like a questions and answer session, with state and local agriculture officials focusing on how to use drought-stressed corn that may not produce by the end of 2015’s growing season.

The most severe drought Moore recalled occurred in 1986. Cutting mentioned 2002. Both years had rainfall totals that measured close to half of 2015 measurements in Rowan County, according to data from the state’s climate office.

“Droughts come and go, and unfortunately its something we have to deal with,” Moore said. “It’s part of doing business as a farmer.”

A steady evolution in the business of farming is also a contributing factor to a projected reducing in corn yields, Hampton said. As technology increases in everyday life, so too has the way farmers plant crops, he said. More efficient farming equipment has resulted in a decreased length of time needed for planting commercial row crops, and results in crops being planted closer together.

Additional rain such as storm showers on Friday and Saturday won’t help corn crops, Hampton said. Hampton and Moore said the crop requires rain during a specific period of the growing season.

A variance in the time corn was planted could mean a greater percentage of fields creating sellable product, he said. If crops are planted closer together, it’s likely they would all be affected identically by a drought.

Other crops stand a chance of surviving 2015 without seeing as severe an outcome as corn, Hampton said.

“Soybeans have a much longer window for growth, and we still have time for rain to help them” he said.

Soybeans and corn don’t complete the list. In fact, nearly everything that grows has been negatively affected.

“This drought is going to be devastating to much more than corn producers,” Cutting said.

Hampton, who raises Angus beef on his farm, said he started using hay two weeks ago that was set aside for winter months.

Extension Director Darrell Blackwelder said vegetables in backyard gardens may not be edible at the end of the growing season.

“With it being hot and dry, cantaloupes and cucumbers won’t fill out correctly, and the fruit itself will not become edible,” Blackwelder said. “It will be so bitter form the heat and drought.”

Lawns in front of some houses may have become brown and dormant as a result of the drought.

It’s not all bad news, according to Blackwelder.

Hot and dry conditions results in a lower number of disease ridden plants, and the weather is especially helpful for farmers with irrigation, he said.