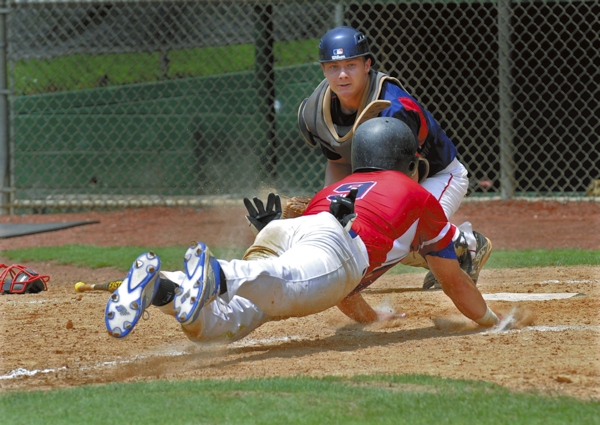 Southern Rowan's Chase Labbe #9 scoring a run diving into the plate with Mocksville's catcher Neil Hutchens #1 is covering. photo by Wayne Hinshaw, for the Salisbury Post

MOCKSVILLE — Mocksville-Davie’s Neal Hutchens slammed a baseball in the seventh inning Sunday that did something no one had ever seen a baseball do at Mando Field.
Hutchens’ drive landed on top of the left-field wall, but instead of simply bouncing over for a home run, the ball came spinning back into the field of play.
“Well, it’s a homer if it hits the foul pole and a homer if it hits the light pole or the scoreboard,” Mocksville coach Charles Kurfees said. “But the top of the wall isn’t something we’ve ever discussed in the ground rules. So that ball’s still in play. Maybe we need to put a strip of yellow tape up out there. If the ball goes above the tape it’s a homer.”
Hutchens settled for an odd double, but it was a huge one. His two-bagger plated the decisive run as Mocksville held on to beat Southern Rowan 7-6 on Sunday afternoon.
Ninth-seeded Mocksville (10-15) got a complete game from hurler Jalen Scott and swept eighth-seeded Southern Rowan in a best-of-three series. Now Mocksville will take its annual shot at Rowan County in Round 2. That series starts Monday at Newman Park at 7 p.m.
For Southern Rowan (11-13), which ended the season on a five-game slide, the game resembled a lot of recent games. Southern Rowan got people on base but couldn’t drive them in.
Southern Rowan didn’t produce a single run-scoring hit. SR managed two sacrifice flies (Matt Saul and Dillon Atwell), got a run on Matt Honeycutt’s infield bouncer with the bases loaded and scored three times on Mocksville miscues.
“It all boils down to situational hitting,” Southern Rowan coach Ben Hampton said. “We had enough guys on base. We just didn’t produce a key hit.”
Mocksville pounded the ball again, banging out 18 hits, including four by Hutchens, the No. 9 hitter. Mocksville whacked six doubles, two by leadoff man Charlie Muchukot. Red-hot No. 2 hitter Ross Hoffner drove in three runs.
Mocksville opened the bottom of the first against SR left-hander Blake Johnson with four consecutive lasers and never stopped ripping hard groundballs through the left side.
“It’s hard to beat a team that got as many hits as they got today,” said Honeycutt, who had a triple in the first inning. “But our pitchers battled. They gave us a chance. It was a well-fought game.”
Scott didn’t walk or hit a batter, so Southern Rowan needed a break. It appeared it had gotten one in the eighth inning when a grounder down the third-base line by Saul took a crazy, kangaroo hop. SR argued the ball had hopped over the bag, but a potential double was ruled foul. Then Scott struck out Saul to end the inning.
“It would’ve been nice to have gotten that call and we would’ve had runners at second and third, but you can’t wait around all day for a call and hope you get it,” Hampton said. “Hats off to their pitcher. He kept us off-balance.”
Down 2-0 after the first, Southern Rowan tied it 2-all in the third, scratching a pair of runs after loading the bases on a single by Bo Corriher and bunt singles by Chandler Corriher and Shaggy Wyatt.
Jake Pritchard’s bunt single, Chase Labbe’s double, Saul’s sac fly and two Mocksville errors gave Southern Rowan a three-run sixth and a 5-4 lead.
But Mocksville recaptured the lead for good in the bottom of the sixth. Hoffner’s RBI single tied the game 5-all, and Barrett Hennings’ sac fly gave the home team a 6-5 lead.
The ninth inning was Scott’s strongest. Southern Rowan went down 1-2-3 with two strikeouts.
“Scott gave us nine innings when we needed it, and what more can you say,” Kurfees said. “His record isn’t that great, but he’s pitched for us against the powerhouses.”
For Southern Rowan, it was an early end to the summer. Hopes were high with a number of 2014 high school graduates returning to boost the program. Southern Rowan started out 6-2, but momentum faded.
“It’s a tough way to end it,” said Honeycutt, who redshirted at Mars Hill in the spring. “I’ve played with a lot of these boys for a lot of years.”