Salisbury episode on ‘Life in the Carolinas’ wins Telly Award 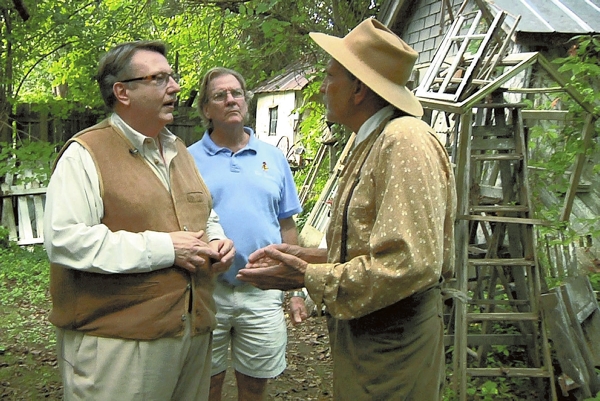 Carl White, left, and Ken Welborn, center, speak to Clyde, a Salisbury artist and collector, during filming for 'The Collectors' episode for White's 'Life in the Carolinas.' The episode in Salisbury won a Telly Award for the show. Submitted photo

CHARLOTTE — An episode featuring the Salisburians Tom Isenhour and Clyde has won a Telly Award for Carl White’s “Life In The Carolinas,” a syndicated television series.

The episode in which Isenhour and Clyde appeared was titled “The Collectors.” White’s show also won a Telly Award for an episode centered on Shelby’s hosting of the American Legion World Series.

The awards program had nearly 12,000 entries from all 50 states and numerous countries.

In “The Collectors,” host White drove a 1946 Chevrolet and took viewers on a day trip, traveling from Wilkes County to Salisbury, with a stop in Pilot Mountain. He is joined by his friend Ken Welborn, publisher of The Record in North Wilkesboro and a passionate connoisseur of collectibles.

Their mission was to find and deliver a unique gift for Isenhour, who is White’s friend, besides being a bluegrass musician and collector extraordinaire.

In Salisbury, White and Welborn detoured to meet Clyde, who also can be considered a local historian. Clyde lives near the site where the Salisbury Confederate Prison operated during the Civil War. He shared stories about the prison’s history before bringing out some of his collectibles from the prison that he has found over the years on the grounds.

A judging panel of over 500 accomplished industry professionals, each a past winner of a Silver Telly and a member of The Silver Telly Council, judged the competition.

“The Telly Awards has a mission to honor the very best in film and video,” said Linda Day, executive director of the Telly Awards. “Carl White’s ‘Life In the Carolinas’ accomplishment illustrates their creativity, skill and dedication to their craft and serves as a testament to great film and video production.”

White is his show’s host and executive producer. He is working on its seventh year in syndication.

“I love what we do,” White said in a press release. “the places and people we visit are amazing, and they trust us to share their stories with the world. Each person who works on the show is a creative story teller with a passion for doing a great job in representing the true spirt of each story. I am indeed fortunate and blessed to be surrounded with wonderfully talented people.”

The YouTube link to the winning episode related to Isenhour and Clyde is https://youtu.be/KCBOmFs5YuI