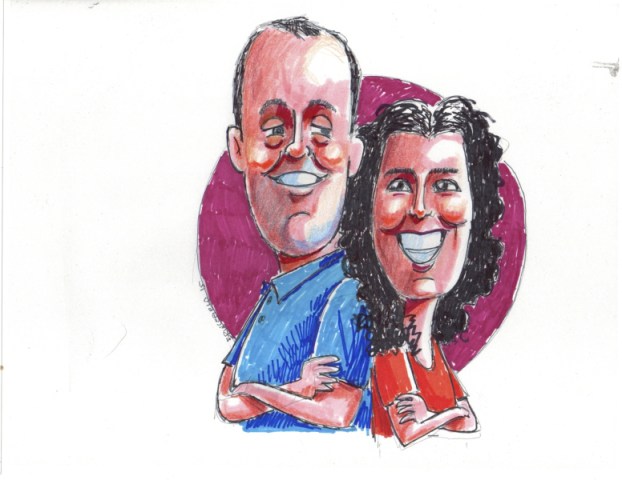 He said, she said: Let’s clear up a few things David and Jeanie on their engagement day.

After reading Jeanie’s column for this week I have a few rumors to debunk before I introduce our story.

First, I am the uncle to two wonderful nephews. Anthony is 3 and Ehren (pronounced like Aaron) is now 1. Before Ehren was born, I would take Anthony off my sister’s hands for a week at a time for some quality bonding time. One time he got a stomach bug and the easiest way to comfort him was to cuddle up and watch videos of children’s songs on YouTube. “Let it Go” from “Frozen” was his favorite, so I had the song pounded into my head.

Second, lying only has a few acceptable occurrences within a relationship – misleading your girlfriend to make the proposal a surprise is one of them.

When meeting Jeanie for the first time, I was one of the longest-attending group members of the Bible study that we attended, so I knew instantly when someone was new. Pulling in that night was no exception when I saw a new car with a bumper sticker from a place I was familiar with as well. It made a great ice breaker.

After introductions, I found out that Jeanie was relatively new to the area, and getting plugged in can be tough. I admit it, I felt sorry for her, so I made the effort to include her when the group was meeting up outside of our normal hours.

What Jeanie didn’t include in her introduction that helped our relationship grow is that she started hanging out with me because she could use me. In an attempt to save money, she does not have cable, Internet or a washer and dryer. Trying to be a nice guy, I offered to let her use mine to get her work done and do laundry at the same time.

Having the time to hang out really allowed for a friendship to happen. I had gotten out of a relationship relatively recently so I wasn’t interested in anything but a friendship. Over the time, we interacted extremely well, and apparently others saw it before I ever did.

Over the past year of dating I have gotten to meet her parents, extended family and most friends, and I’ve loved all of them. Being in the relationship, I felt welcomed and accepted, which provided a level of comfort that I had never experienced in the past.

With two sisters, an involved mother, and previously failed relationships, I have learned that my role as the boyfriend is to be involved, supportive and respectful in all that I do, especially with a significant other.

When I knew our relationship had the potential to go places, I wanted to ask important questions without her knowing the intention behind it. To do so, I suggested early in our relationship to talk about our future without leading her on in case something happened and we didn’t work out.

By the time I was ready to propose, I secretly brought back up the previous conversation of our future plans and asked what changed. As we talked, I realized that Jeanie loved the Catawba College chapel and wanted an April or May wedding.

The day after that conversation, I went to the Catawba office for reserving facilities and found the open dates for next year during April and May. I found a date that was open and asked to hold it.

The problem with that was that I had not proposed yet, and I still did not have a ring.

With a location and date selected, I spent the next week or so poring over rings and studying them to find the perfect one. I was fortunate enough to find it and put it on layaway so I could ask for her father’s blessing and not break down and give it to her before then. Patience really is a weakness of mine!

A week or so after choosing a ring, I was scheduled to go to the NASCAR All-Star Race with her father, a fun trip we planned the past Christmas. The timing became stressful when Catawba’s baseball team was so successful that they earned the right to host the regional tournament the same time as the race. After sweating bullets and calling in some favors, I was able to get the day covered by some friends and colleagues and was able to go.

I originally intended for the race to be a great time to spend with her dad and had no intention of having the big talk that day. Again, patience is not a strong point for me. I knew I wanted to propose, and the opportunity to talk to him was getting more and more difficult, so I asked to take him to lunch before we went to the track and I got the blessing.

As reported, my goal was to propose in July at the beach during a vacation trip, but I was getting more and more anxious about letting the secret out. I chose to the move the timeline up, since it would also give Jeanie two extra months to plan.

There is a video of the proposal, but I plan to destroy it. I butchered the whole thing from beginning to end. Nerves got the best of me, but I was excited for the outcome.

When it comes to wedding planning, I strive to be involved just like the women in my life taught me. While I have been involved so far, my priority is that Jeanie is the main attraction and is excited for our big day.

The process has been an experience already. We do disagree, and we both have unique priorities but at the end of the day, we somehow end up on the same page and have been able to compromise or understand each other.

David Freeze: Out of Alabama, into Mississippi