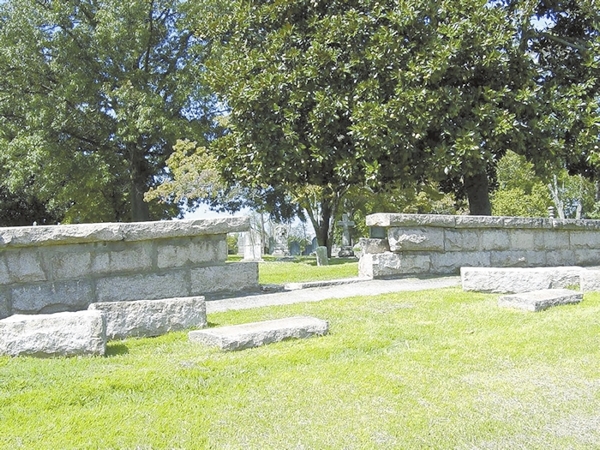 Stones were removed from the wall between the Oak Grove Freedman's Cemetery and the Old English Cemetery in 2004.

The Oak Grove Freedman’s Cemetery is a grassy knoll at the corner of Liberty and Church streets, encircled by a granite wall.

The wall has two openings. One is for the entrance. The other was created in 2004 by removing several blocks of granite from the wall between the Freedman’s Cemetery and Old English Cemetery beside it — an opening intended to symbolize their shared history, blacks and whites together.

Discussion about symbols of the Confederacy has raised questions all over the South. What can Salisbury do to have more tributes to black history? And how can the Confederate monument on West Innes Street become more to our African American citizens than a reminder of the slave-holding past?

I knelt by the graves of my parents … A black stump at the head of my mother’s grave was all that remained of a tree my father had planted. I seemed to hear my father’s voice come from it, bidding me not to tarry till I reached freedom.

The outer walls of the Freedman’s Cemetery bear haunting words from stories, songs and poetry.

Through the years, wooden markers that identified the graves deteriorated and disappeared, but historians believe some 144 people, most of them African American, are buried there.

The cemetery got short shrift through much of Salisbury’s history. Around 1855, someone decided to separate the black graves from the white ones with a granite wall. Several graves were disrupted and moved so the city could build Liberty Street around 1903.

As the 20th century turned into the 21st, however, people began working together to preserve the Freedman’s Cemetery and treat it with the deference and respect it deserved. More granite went up to create a wall along Church Street and stone veneer was added to the wall on Liberty.

Then the inscriptions were added.

Stony the road we trod … We have come over a way that with tears has been watered.

The killing of nine black people at Emanuel AME Church in Charleston, S.C., by a young white man has opened up old wounds for African Americans. It has also opened discussion of subjects that people have skirted around for a long time, such as Confederate flags and Confederate monuments. They mean different things to different people.

Those with ancestors who fought in the war want to pay tribute to them. Those whose people were enslaved would rather not be reminded. They have a different history to celebrate.

Your death was the stepping stone your children’s children crossed upon.

The Oak Grove Freedman’s Cemetery lay neglected and forgotten for far too long. Now it stands as a beautiful and profound memorial.

If the people of Salisbury can do that with a knoll, what could they do elsewhere in the city to bridge the divide between black and white and remember ancestors in a way that can make everyone proud?

A bronze statue on West Innes Street depicts a winged Fame, holding up a wounded soldier. Just the mention of moving or changing this Confederate monument upsets a lot of people. It is a graceful work of art, a symbol of Salisbury.

But people should not be afraid to talk about how Salisbury honors its ancestors, black and white.

Removing blocks from the wall between the two cemeteries on Church Street was controversial at the time. In some ways, though, that opening is the greatest memorial of all.