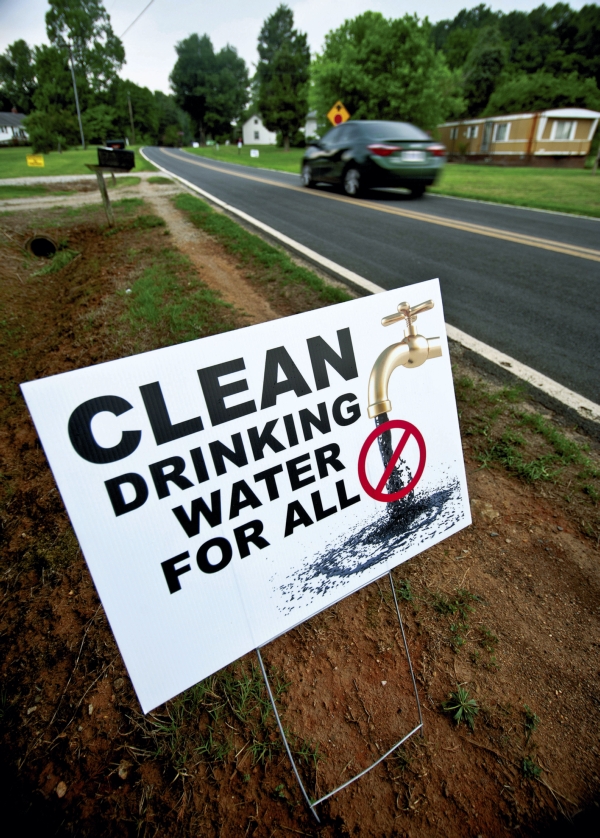 That was the crowd’s grumbling response Tuesday night each time a Duke Energy representative said she empathized with people whose wells near the company’s coal ash ponds had been declared contaminated. “I know how you feel,” Erin Culbert said.

“You don’t really know how we feel,” one woman said. “You don’t know the inconvenience this is causing.”

The informational meeting set up by the Rowan County Health Department at the county’s agriculture center brought together — perhaps for the first time — Duke representatives and state health and environmental officials to answer questions about the contamination found in wells near Duke coal ash ponds.

They stayed as long as people had questions, starting with presentations at 5 p.m. and lingering to talk one-on-one until about 8:30 p.m.

Most of the 44 wells declared unsafe in Rowan County’s Dukeville area have tested above state standards for hexavalent chromium and vanadium, which occur naturally but can be toxic for human consumption at certain levels.

Do those “certain levels” merit the stringent standards state toxicologists have set? Duke officials and their consultants don’t hide their doubts — just as residents are open with their skepticism of the power company.

Duke Energy has denied responsibility for any unsafe water wells near its coal ash ponds. Groundwater studies under way should settle the question. Results are expected to start becoming available in late August or early September.

Questions from the audience revealed a wide range of understanding and interests. Affected homeowners found themselves sitting with representatives of environment groups, testing companies, local government and law firms.

The sentiments of homeowners with contaminated well water came across most clearly — confusion, bewilderment, exasperation and an edge of resentment.

When will we find out whether Duke is responsible?

How is my elderly mother supposed to tote in heavy bottles of water?

Is it safe to swim in my pool?

Is Duke going to pay for what this has done to our property values?

What about my dog?

Dr. Lisa Bradley, a national expert on toxicology working as a consultant with Duke, focused on vanadium. The standard set by the state, she said, “is much, much lower than the exposure to vanadium you get every day in your diet.” Vanadium is even present in vitamins, she said.

“We got a problem,” Rudo said. “This is not a good situation.”

Rudo emphasized the presence of hexavalent chromium, describing it as the chemical from “that movie.”

Several audience members called out the movie’s name, “Erin Brockovich.” The biopic is based on the the story of a power plant in Hinkley, Calif., whose storage ponds exposed nearby residents to high levels of hexavalent chromium. In 1996, Pacific Gas & Electric had to pay the plaintiffs in a resulting lawsuit a $333 million settlement. More cases and multi-million-dollar settlements followed.

“These levels are much lower, thank God, ” Rudo said.

But because hexavalent chromium is a geotoxic carcinogen, he said, “we know it can change your DNA.” That can initiate steps that can lead to cancer — of the stomach, throat, larynx — he said.

“The assumptions that we make in the risk-assessment community that’s involved in public health is that there really is no safe level of exposure to a geotoxic carcinogen,” Rudo said.

Lacking federal standards or state well standards for hexavalent chromium, Rudo said his agency and the Division of Waste Management looked at existing science and studies, including cancer slope factors calculated in California and by the federal Environmental Protection Agency, to set a new N.C. standard.

That standard is .07 parts per billion — so low that it’s at the limit of what many labs can detect.

“Our rules require us to look at chemicals based on a one-in-a-million cancer risk,” Rudo said.

The state’s new .3 ppb standard for vanadium is also based on EPA calculations, he said.

Consuming vanadium in the vitamin form that Bradley mentioned is different from having the chemical in your water, Rudo said, and how it can react in the body to cause toxicity.

Vanadium can affect blood pressure and the kidneys, he said. “We’re protecting based on the science we utilize.”

In response to questions from the audience, Rudo said the contaminants were not very soluble, so little could be absorbed through swimming in pool water.

As for whether dogs should drink contaminated water, “treat them like you would treat yourself,” Rudo said. Culbert said Duke would provide water for pets but not livestock.

Duke and state officials often point out that the federal Safe Drinking Water Act sets no standard for hexavalent chromium. Rudo said the federal standards are outdated and the EPA is working on revising them.

“We would recommend — remember, it’s just a recommendation, we’re not regulators — we’re recommending that you don’t use the water for drinking, for cooking, for making coffee, tea and ice.”

“At the end of the day, no matter where it comes from, we have to come up with a permanent solution of some kind. … Whether it’s filtration, running water lines — that’s a question for other people here,” Rudo said.

Water contamination was not the only problem on the minds of residents at the meeting. One person reminded the speakers about reports several years ago of a brain cancer cluster in the Dukeville area and questions about the electro-magnetic field around Duke’s facilities.

And Melissa Shue, who grew up on Leonard Road in Dukeville, expressed concern about the coal ash that filled the air before Duke started capturing the material and pumping it into storage ponds. Ash from Buck’s smokestacks was in the dirt children played in, on the plants families grew in their gardens. “I wonder what we’ve consumed,” she said.

Shue said she appreciated the health department’s work in bringing the meeting together. People are on guard because at first Duke said nothing was wrong with water near its ponds, but then 200 people got letters saying don’t drink the water.

“At some point the truth’s got to come out,” Shue said. “At this point, I’m probably suspicious and I still haven’t drawn a definite conclusion. … To me, it’s very conflicting.”

“All of my clients feel much, much better having heard from him,” said Wallace. Her firm, Wallace and Graham, is representing families that live around Buck Station and the Allen Station in Belmont.

Rudo made a point of talking about carcinogenic factors and health risks, she said. “Dr. Rudo appears to have become more interested in the health effects than many others.”

At least one solution was offered during the meeting. The Rev. Josh Britton, pastor at Bethel United Methodist Church on Long Ferry Road, said his church was committed to helping the community. If people who have trouble maneuvering heavy packages of bottled water would contact the church, Britton said, he would connect them with a volunteer who can help.