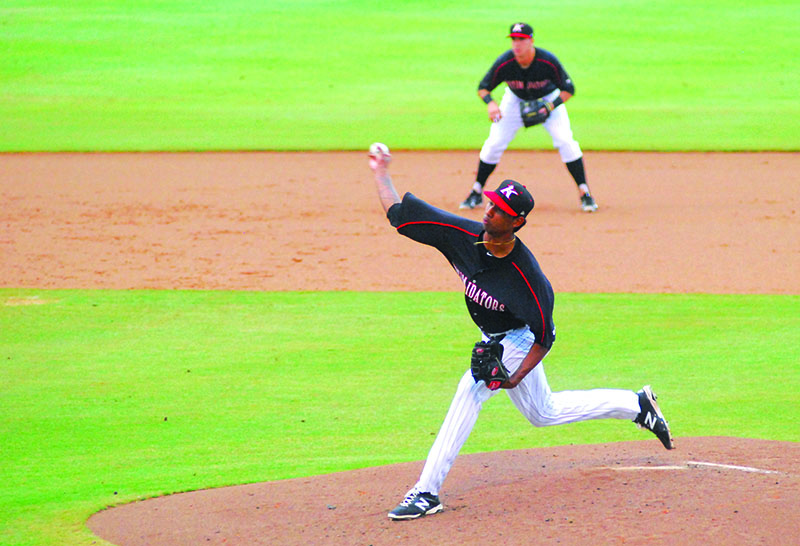 KANNAPOLIS — The light finally came on for Luis Martinez. That meant lights out for the West Virginia Power on Friday.

A 20-year old right-hander, Martinez was a yankee-doodle dandy for the Intimidators in a rain-shortened 3-0 victory at CMC-NorthEast Stadium.

“He was an amazing competitor tonight,” teammate Brad Salgado said. “Coming in he had a lot of walks and high pitch counts. Tonight, it was like he knew his stuff was good enough to get hitters out.”

Martinez, who issued 32 walks in his first 12 starts (48 1/3 innings), turned his 13th into a gem. He hurled six scoreless innings, struck out two and walked none as Kannapolis (3-6) earned a split of the four-game series.

“He was just attacking guys,” said Salgado, a 23-year old reliever. “We’re all glad to see him get back on track.”

Martinez used his lanky frame to befuddle first-place West Virginia (7-2). Before 3,752 fans, he yielded only a pair of singles, induced seven groundouts and threw first-pitch strikes to 12 of the 22 hitters he faced.

Kannapolis opened a 1-0 lead against losing pitcher Alex McRae in the last of the first inning. Ryan Leonards coaxed a leadoff walk and advanced to second base on Mason Robbins’ line-drive single over shortstop. A groundout left runners at the corners for first-baseman Nick Basto, who hoisted a sac fly to right field.

“We played a great game,” said all-star shortstop Eddy Alvarez, who sat out a game for only the fourth time this season. “We got hits when we needed hits. We moved runners when we needed to move runners. We played White Sox baseball.”

Martinez retired the first 10 West Virginia batters before the Power put two runners aboard in the top of the fourth. A controversial call on a force play at second tested his mettle, but he escaped following a couple of routine flyouts.

“Sometimes things happen that are beyond your control,” said Salgado. “He showed a lot of guts to keep a run from scoring.”

The Intimidators stretched their lead with two runs in the last of the fourth when McRae ran into double trouble. The right-hander surrendered a leadoff two-bagger to Louie Lechich, then an almost-identical double into the left field corner by Basto.

“Basto’s been working a lot with (hitting coach Robert) Sasser,” said Alvarez, third in the league with 36 stolen bases. “His average is down (.189), but it’s so easy to lose your touch. He’s just trying to find himself again.”

The Intimidators’ final run crossed when Michael Danner lofted a fourth-inning sac fly — and the rest was up to Martinez. Plate umpire Ryan Powers sent both teams to their locker rooms when a downpour arrived in the last of the seventh. It was officially called 35 minutes later, following a spectacular fireworks show.

But nothing was able to outdo Martinez’s performance.

“Once he realizes how good his stuff is, he’s going to have a lot of positive things happen,” Salgado said. “Just like tonight.”