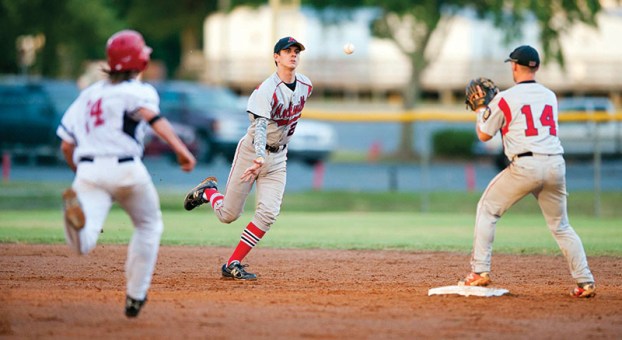 LANDIS — As Mocksville-Davie leadoff man Charlie Muchukot’s two-run triple soared toward the right field fence 390 feet away, Southern Rowan’s hopes for a playoff run plummeted.
Muchukot’s clutch hit in the eighth inning broke open Saturday’s opening game in a best-of-three, first-round series in the Area III Tournament. Mocksville won 11-5, weathering a 45-minute rain delay and the three-hour struggle that followed.
Southern Rowan (11-12) has to sweep a doubleheader Sunday from Mocksville to extend its season. The teams will play at Mocksville’s Rich Park at 1 p.m. and at Southern Rowan, if necessary, at 7 p.m. If the series is shortened by weather, Mocksville’s Game 1 victory will be decisive.
The survivor advances to play top-seeded Rowan County. That series starts at Newman Park on Monday.
After failing to score with the bases loaded and no outs in the first against Southern Rowan hurler Dillon Atwell, ninth-seeded Mocksville (9-14) put together a solid effort.
“We screwed up at the start,” Mocksville coach Charles Kurfees said. “But we did a decent job after that.”
Mocksville used 15 hits, four walks, four hit batsmen and four Southern Rowan errors for a non-stop carousel on the bases. Mocksville had a three-run third to take a 4-1 lead, a three-run seventh to go ahead 7-2, and a four-run eighth that effectively answered Southern Rowan’s three-run seventh.
Seven different Mocksville players drove in runs. Roff Hoffner and Neal Hutchens had three hits each. Muchukot, Elijah Jones and Sawyer Davis had two each.
Eighth-seeded Southern Rowan (11-12) had plenty of chances, but the home team left 12 on base against Mocksville pitchers Colby Cranfill, who won it, and Adam Fletcher, who earned a save.
Cranfill escaped a first-and-third, no-outs situation in the sixth. Fletcher got Shaggy Wyatt to pop up with two men on base to protect a 7-5 lead in the seventh. Cranfill and Fletcher combined for 13 strikeouts, and Fletcher fanned the side after the first two Southern Rowan hitters reached in the ninth.
“We put our pitchers in some tough situations, but they got us out of them,” Kurfees said.
Chase Labbe and Atwell had three hits each for Southern. Honeycutt and Chandler Corriher had two each.
Southern Rowan took a 1-0 lead in the first on back-to-back doubles by Matt Honeycutt and Labbe. Bo Corriher scored on a wild pitch in the fifth for Southern Rowan’s second run.
Southern Rowan took advantage of a two-out error in the seventh to score three times and knock out Cranfill. Cranfill, like Atwell, pitched two innings in Friday’s weather-aborted game.
While Mocksville is in the driver’s seat, Kurfees is taking nothing for granted.
“Southern Rowan isn’t going to lay down,” he said. “We still have to show up Sunday.”