Shouldn’t we all feel safe under Fame’s wings? 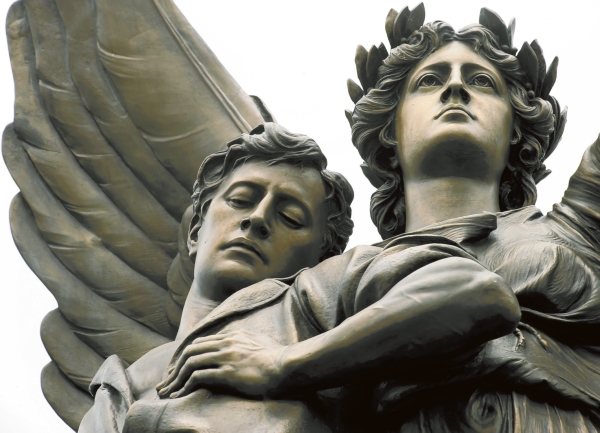 SALISBURY — Sunday’s rally for the Confederate flag around the “angel” at Church and West Innes streets — directly across from the Salisbury Post — was a somewhat jarring reminder this 106-year-old piece of public sculpture is a monument to the Confederacy.

Through the years, the dramatic grouping of Fame holding a dying soldier under her protective wings has become an iconic symbol of Salisbury and one of the more interesting pieces of public art in North Carolina. That statue has been photographed and its image reproduced probably hundreds of thousands  of times over the past century.

By any measure, it’s impressive. From the bottom of the base to the top of Fame’s wings, the monument is almost 23 feet tall.

But the long-held appreciation of “Gloria Victis,” which translates to “Glory to the Vanquished,” has been more for its beauty as a work of art than as a tribute to Rowan County’s fighting on the losing side of the Civil War.

I’ll leave Sunday’s rally around the monument to others to debate, except to say I thought it was insensitive at best. But it also forces me to be a hypocrite. In defense of “Gloria Victus,” I have to use the arguments of history, heritage and culture to make a case for why it’s important to the public landscape and why it should stay where it is.

I think if Fame, this winged muse or angel of mercy, could say anything, she probably would tell the Confederate flag-wavers to take their rallies somewhere else. I can’t help but remember what Sue and Ed Curtis, maybe the best authorities on the monument’s history, told me several years ago.

“Gloria Victis” has evolved into an “all-wars monument” for the city, Sue Curtis said then, and she offered the idea that today’s veterans of more modern wars find comfort in passing by Fame and seeing her support the dying soldier while preparing to crown him with a laurel wreath.

She described feeling safe under Fame’s wings, and how that sense of security should be afforded to everyone. I’m not sure everyone felt that security blanket passing the monument Sunday with the small rally in progress.

On May 10, 1909, on Confederate Memorial Day in North Carolina, this monument was dedicated to the 2,500 Rowan County soldiers who fought for the Confederacy. Around 4,000 people attended the ceremony, including Frederic Wellington Ruckstuhl, the sculptor; Anna Morrison Jackson, the widow of Stonewall Jackson; and 162 surviving Confederate veterans.

Ruckstuhl was born in France in 1853, but he grew up in St. Louis and attended Washington University Art School there. Over time, he set up his first studio in Paris, and by 1892, he also had a studio in New York.

From what the Curtises have told me, Ruckstuhl created “Gloria Victis” in 1891 and cast two of the groupings, which seem totally inspired by an 1874 sculpture of Fame by Frenchman Antonin Mercie.

The sister to Salisbury’s Confederate monument stands on Mount Royal Street in Baltimore and was dedicated in 1903. A long time ago, I went on a successful mission to find the Baltimore version and take a photograph of it. I discovered it is slightly different because the soldier is carrying a furled flag, not a broken gun.

The statues were produced at different foundries. The Baltimore monument was cast in New York; Salisbury’s, in Brussels, Belgium, at the H. Luppens & Co. Foundry. Salisbury’s monument once was part of an art exhibition in Paris, where a newspaper report said visitors liked its  “sentiment and beauty as a work of art.”

Both monuments ended up at Ruckstuhl’s studio in New York. According to records with the United Daughters of the Confederacy’s Robert F. Hoke Chapter No. 78, Mrs. M.W. Shober, a Salisbury resident, viewed them in the sculptor’s studio and decided the bronze grouping definitely could be the Confederate monument Rowan County was looking for.

The UDC chapter in Salisbury decided as early as 1901 that it wanted Ruckstuhl’s “Gloria Victis.” Noted Salisbury author Frances Fisher Tiernan, whose pen name was Christian Reid, chaired the monument committee, and she allowed proceeds from her play, “Under the Southern Cross” to go toward the long fund-raising campaign.

Ruckstuhl’s price was $10,000. An additional $1,500 had to be raised for the pink granite base, which came from the Balfour company in Granite Quarry. The statue arrived in Salisbury in 1905, but it apparently was stored away until all the money was raised and the formal dedication could be held in 1909.

This is an important part: In 1908, the Salisbury Board of Aldermen and Mayor A.H. Boyden deeded the site the statue stands on to the UDC, and the monument and the sliver of land it’s on still belong to the organization. Neither belongs to the state or local government.

There are some other interesting things to know related to Salisbury’s monument. Ruckstuhl, who lived until 1942, became well known for his bronze and marble works, and he has pieces in the Metropolitan Museum of Art, Library of Congress, the Pennsylvania State Capitol Building, the State House in Columbia, S.C.,  Statuary Hall in the Capitol Building in Washington, D.C., and on the Civil War battlefield in Petersburg, Va.

Ruckstuhl used an 1861 photograph of Confederate Lt. Henry Howe Cook of Franklin, Tenn., as his model for the soldier in Fame’s arms. The Curtises once visited Franklin to learn all they could of Cook, an attorney and judge who became a strong political figure in his region before dying in 1921.

The statue has only been gone from its spot in Salisbury one time since 1909. In late 1990 and early 1991, “Gloria Victis” was sent to Karkadoulias Bronze Art Co. in Cincinnati, where the grouping was cleaned, brightened and repaired.

The inscriptions on the base contain the words reminding you this is a Confederate monument. There are dedications to Rowan’s Confederate soldiers and the mention of devotion to duty and country, valor, historic deeds and sublime sacrifice.

The phrases “state sovereignty,” “constitutional liberty” and even “Union of these States” come up. The back of the statue’s base includes the inscribed Latin phrase “Deo Vindice,” which was the motto of the Confederate States of America. It can be translated several ways, but it essentially means “With God as our champion” or “With God as our vindicator.”

I don’t know if there will ever be an effort calling on the removal of Salisbury’s Confederate monument. I hope not. I can understand arguments contending it’s an uncomfortable symbol, especially when rallies such as the one Sunday are held around around it.

But the selfish part of me likes “Fame” as a beautiful piece of public art, a part of history and something that sets Salisbury apart. When we look on it, why can’t we see it as our newest monument paying tribute to those who have fought in all wars?

Viewed in those terms, maybe it could bring us all together.