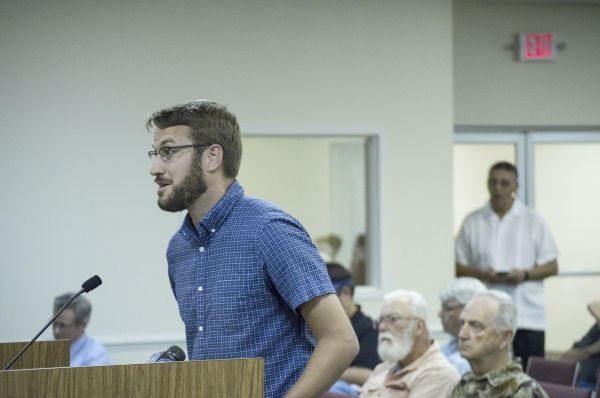 Josh Bergeron / Salisbury Post - Yadkin Riverkeeper Will Scott on Wednesday speaks during a public hearing on a storm and wastewater permit for Alcoa in Stanly County. During the hearing, a majority of speakers asked the state to deny or change the permit.

ALBEMARLE — The message was clear — stop polluting groundwater that seeps into the Yadkin River.

The North Carolina Department of Environment of Natural Resources held a public hearing Wednesday for a permit that would allow Alcoa to continue discharging ground and storm water from Badin Works into tributaries of the Yadkin River. Scores of people — about 80 — attended, including environmental activists, lawyers and residents from Stanly and Rowan counties. Calmly and thoroughly, a majority of speakers asked the state to deny a permit that sets limits for contaminants such as arsenic to be discharged into lake and river water.

Adam Landman, a local resident who spoke during the hearing, commented on the serious nature of the discussion and its implications.

“We’re talking very casually about cyanide,” Landman said. “Cyanide is the stereotypical poison. You see it in Tom and Jerry cartoons. You see it in Bugs Bunny. When he wants to kills something it’s cyanide. And, we’re talking about how much of that we want to put into our drinking water. This seems ridiculous to me.”

He mentioned Duke Energy, who has begun the process of excavating a number of its coal ash basins across the state. Landman said Alcoa should be forced to do the same — clean up any waste remaining on the site of Badin Works. The site formerly housed an aluminum smelting plant, which permanently closed in 2010.

Most of Wednesday’s speakers echoed Landman’s sentiments, asking the state to deny the permit completely. Others such as Yadkin Riverkeeper Will Scott asked for stricter water quality standards if DENR decided to issue the permit.

Scott suggested that remnants of industrial waste, stored in a landfill near Badin Works, was leaching into ground and storm water before trickling into nearby streams and lakes.

“We see continued discharges of cyanide above the levels which the (Environmental Protection Agency) has set to protect aquatic species,” Scott said.

He said the Yadkin Riverkeeper organization submitted its own testing to the state showing cancer-causing chemicals present in fish tissue samples from nearby bodies of water.

He said more chemicals than previously thought may be present in water runoffs from a nearby landfill, and more monitoring is needed to determine the source of leaching chemicals.

The three permit changes suggested by Scott were reducing the compliance schedule for Alcoa if a permit is issued, additional groundwater monitoring and preventing chemicals from entering streams and lakes and causing further damage.

Chandra Taylor, a representatives of the Southern Environmental Law Center, said the contamination from Alcoa’s landfill is disproportionately affected the community of West Badin, which has a population that’s majority black.

“The citizens remained deeply concerned about the residents and visitors whose use of Badin Lake and Little Mountain Creek for fishing, boating and swimming is negatively impacted by Alcoa’s continued contamination of these waters,” Taylor said.

She said the state has an obligation under title six of the Civil Rights Act to prohibit discrimination by agencies who receive federal funds. She said DENR receives federal funds and must comply with the act.

A Badin resident, who also works as an Alcoa employee, briefly spoke during the meeting and said he supported the state granting a permit as quickly as possible. He said Badin’s water quality and surrounding discussion has negatively affected Stanly County’s image and is a barrier to economic development.

However, no Alcoa representative officially spoke Wednesday as a representative of the company. Instead, the company provided a written statement, which said: “New permits often include more stringent requirements and we will take the necessary stepts to implement sustainable solutions and comply with the permit conditions as quickly as possible.”

Unlike Scott and Taylor, most local residents used anecdotal evidence as a reason for significant changes or denial of the permit.

Macy Hinson, a West Badin native, told a childhood story of how chemical-laden liquid was spread on roadways during dry dusty days.

“It just lays there, and it’s there forever,” Hinson said.

He advocated for Badin Works to be declared a superfund site. The name is given to officially designated, hazardous waste sites that have been abandoned. The designation allows the Environmental Protection Agency to compel Alcoa to perform cleanups or reimburse the government for EPA-lead cleanups.

In late 2014, the Yadkin Riverkeeper asked the Environmental Protection Agency to conduct an investigation to determine whether the Badin Works should be declared a Superfund site.

More than 1,000 Superfund sites exist across the United States. One speaker during the public hearing pointed out that previous Alcoa properties had been declared superfund sites.

DENR representatives from multiple departments and cities attended the meeting. The three DENR employees who led the public hearing didn’t respond to speaker comments, except to ask questions for further clarification.

Winston-Salem Water Quality Supervisor Corey Basinger said a final decision on the permit’s current draft would be made within 90 days. The permit could be approved as is, modified or denied.

However, Basinger said DENR is concerned about a proposed three-year compliance schedule and would not issue the permit in its current form. He said the public’s comments would be considered as the department considered final modifications to Alcoa’s permit.

The permit is unrelated to Alcoa’s efforts to renew an operating license for its hydroelectric dams on the Yadkin River.

Contamination from Badin Works also doesn’t affect Salisbury-Rowan Utilities customers, as Badin Works is downstream and a significant distance from the intake.