Lure of the lake: It’s summertime, and the fishing is electric 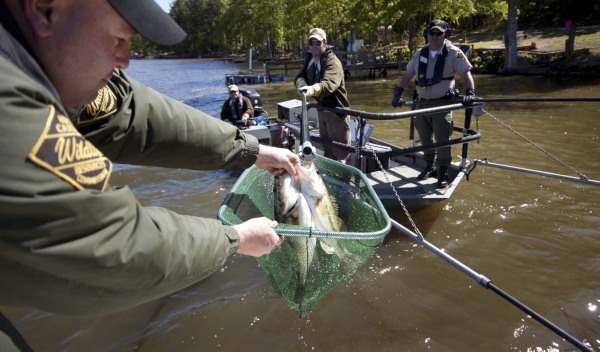 HIGH ROCK LAKE — The flat-bottom boat trolls the cove near the St. Matthews Church Road causeway like a prehistoric lake monster. Right and left arms are extended in front, and wiry tentacles reach into the water.

At the front of the boat, Sgt. Tony Sharum and head district biologist Lawrence Dorsey, both of the N.C. Wildlife Commission, are wearing work gloves and holding long, plastic-handled nets. They’re fishing — electrofishing, to be exact — in about 12 feet of water.

The wildlife boat has a generator creating AC current. A pulsator converts it to DC and sends that current into the probes or tentacles of the lake monster. An electric field is created, and soon silvery fish are jumping out of the water.

“Look at the shad!” wildlife officer Bill Tarpley shouts. In time, numerous crappie, catfish and largemouth bass roll to the surface. Sharum and Dorsey scoop up the bass only and flip them into a live well in the middle of the boat, as assistant district biologist Troy Thompson steers them around the cove.

The other stunned fish recover and swim away.

When their bass electrofishing is done, the men find a spot on the shore of Dutch Second Creek and begin the task of documenting their catch, one by one. They had pulled out 45 bass in about 30 minutes. Dorsey calculated the exact rate at 94 fish per hour.

Dorsey and Thompson are in the midst of sampling largemouth bass populations in six to seven locations on High Rock Lake. They record length and weight and sacrifice some of the fish to determine their ages. Like rings on a tree, the rings on a bass’s ear bone tell the biologists how old the fish are. The information Dorsey and Thompson collect reveals how the fish are growing, what condition they are in, and by using a timer as they electrofish, the biologists calculate the fish they catch per hour and average out a population for the whole lake.

It’s no secret that High Rock Lake, which has been a site for Bassmasters Classic tournaments in 1994, 1995 and 1998, is a great place to fish for largemouth bass. “It’s really good,” Dorsey says. “It’s probably one of the best in the state for a reservoir.”

Sharum, an avid sportsman himself when he’s not patrolling the Yadkin lakes chain in Rowan and Davidson counties, says High Rock Lake has a strong reputation among fishermen in the eastern United States, to the point the lake is even a site included in a popular fishing video game. “I played it one time,” Sharum says.

Among many bass fishermen, it’s known as the “Crankbait Capital of the World.”

With largemouth bass, Sharum says, it’s not unusual for a fisherman’s five-fish limit during tournaments to weigh in around 20 pounds total. “I’ve been here for 23 years, and I think High Rock Lake is fished every day of the year, no matter the weather,” Sharum says.

High Rock and Tuckertown lakes are central to a population of a couple million people within easy driving distance, and these bodies of water also afford public access opportunities — swimming, boating and fishing — thanks to the Wildlife Commission’s game lands program and a strong partnership with Yadkin Inc., which still owns vast amounts of acreage along the waters.

Fishing, quite simply, is a “major economic driver” for the area,  Sharum says, and it’s not only because of largemouth bass. High Rock and Tuckertown lakes, are, for example, full of flathead and channel catfish. Flathead catfish weighing more than 30 pounds are not uncommon, though the more prevalent channel catfish are usually 2 to 6 pounds.

Other abundant fish include crappie, bream, white bass, carp, blue gill (sunfish), perch, gar, hybrid bass. And increasingly High Rock Lake has been developing a reputation as a leading lake for striper bass. “We feel like the growth is real good up here,” Dorsey says of the stripers.

Sharum says the striper bass is the only fish the Wildlife Commission actually stocks in the Yadkin chain of lakes. There’s not enough flow in High Rock Lake, for example, to help them naturally reproduce.

Dorsey, the district biologist, says it usually takes three to four years for a largemouth bass to reach 14 inches. The Wildlife Commission does the electrofishing surveys on the largemouth bass in High Rock Lake every three years, and the oldest bass Dorsey has documented was 18 years old. (A catfish in Badin Lake was 25 years old, he notes).

If experience has told Dorsey anything, High Rock Lake is resilient, and so are its fish. Even after the drought in 2003, the lake’s fisheries rebounded quickly.

“This lake’s so productive,” Dorsey says.

High Rock Lake’s humps, ridges and offshore structure in general provide plenty of cover for large fish populations, and as good as the bass fishery is, the crappie fishery might be just as good. As of Aug. 1, the state will remove the size requirement on crappie. Currently, fishermen have only been able to keep crappie that are 8 inches or longer, so they are probably throwing back about 90 percent of the crappie they catch.

The unofficial record for a largemouth bass caught in High Rock weighed in at 11-pound, 10 ounces, and according to North Carolina Sportsman, it was caught by Tony Garitta on March 1, 1974. Sharum says the largest High Rock bass he has seen was just over 11 pounds, while the biggest crappie — some 20 years ago — was 4 pounds, 12 ounces.

Serious fishermen will tell you the best way to fish High Rock and Tuckertown lakes is offshore and in a boat. But you’ll see plenty of bank fishing, too. Fishing is quite the democratic pastime, something practiced by all ages, genders, races and economic classes.

The fishermen in it for the sport often have thousands of dollars tied up in their boats, trailers and tackle. Sharum says a serious, yet still average fisherman might have 11 rods in his truck. But plenty of other people who fish rely on gear that can be simple and inexpensive.

Sharum says he still sees people using cut-off tree limbs as rods, or winding line around a drink bottle and using that as a reel. He also has noticed family dynamics change through the years, and often finds single mothers bank fishing with young children for both the recreation and as a way to put food on the table.

At the Flat Creek access area off Tuckertown Lake, Charlette Hernandez was fishing for bream, while her husband,  Mariano, was using shrimp as bait for catfish. Mariano has perfected the art of casting a line wound around a spray can, and can throw it as far as a fisherman with a regular rod and reel.

“Yesterday, he had a lot of luck with that spray can,” Charlette Hernandez says. She also was having some success on this particular day. She has 11 bream in a bucket close by that she will take home to her family for eating that night. As a child, she fished with her father and considers it a family tradition.

Will Yost recently bought a 1994 model fishing boat in great condition, so it was a good morning for him and Mike Ripley to go fishing for crappie on Tuckertown Lake. Yost, 31, says he fishes “every chance I get.”

The men use the boat’s depth finder to help them locate good fishing structures. Having used jigs and minnows as bait, they came back to the access area with some good-sized crappie. Yost says he prefers fishing on Tuckertown in the spring and summer because he doesn’t have to contend with the ski boats prevalent on High Rock.

“People who are out here are here to fish,” Denise Hopkins of Rockwell says later as she waits in her husband’s fishing boat while he parks the trailer.

Robert Hopkins will be fishing mostly for crappie that day — something he has been doing along the Yadkin River chain of lakes for 55 years. “I thoroughly enjoy it, plus, it’s an excellent fishery,” Robert Hopkins says.

When the weather is nice and Robert has completed his honey-do list at home, Denise Hopkins likes to accompany Robert on the water. She finds the lake peaceful, but she’s not in it for the sport.