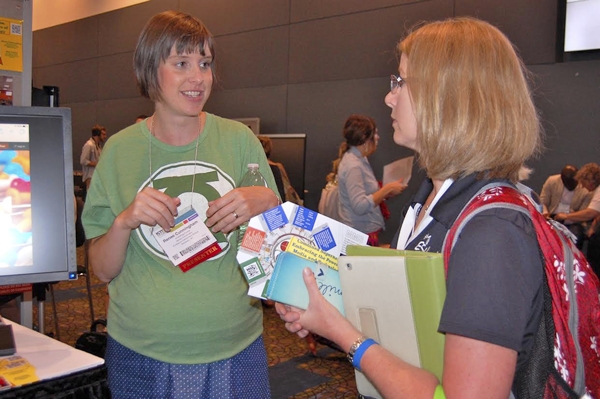 Ann Crilley and Renee Cunningham are Knollwood Elementary’s technology facilitator and media coordinator, but when it comes to integrating technology in the classroom, they like to consider themselves “combined superheroes.”

Cunningham been teaching in the Rowan-Salisbury School System for the past eight years. After her first year of teaching in Cabarrus County, Cunningham was a 21st century classroom teacher at Erwin Middle School for four years. After completing her library science master’s degree at Appalachian State University, Cunningham served as Knox Middle’s media coordinator for three years before transferring to Knollwood.

Crilley has been the technology facilitator at Knollwood for the last four years.

“It wasn’t totally my thing,” she said.

Crilley had been integrating a lot of technology into her classes and really enjoyed that piece of her job, so she decided to pursue a master’s degree in instructional technology.

When she graduated from East Carolina University’s graduate program, she took the technology facilitator position at Knollwood Elementary School.

Although this past school year was Cunningham’s first year at Knollwood, the two aren’t strangers. The pair attended Elon University together as college students.

That reconnection has turned into a sweet partnership that has directly benefited the students at Knollwood Elementary School.

So it’s no surprise that between the two of them, they were asked to present seven different sessions at the International Society of Technology in Education’s (ISTE) conference in Philadelphia this week. Quite a feat, considering only 38 percent of submitted sessions are accepted.

The pair presented four of those sessions together, Crilley presented twice with other Rowan-Salisbury educators, and Cunningham presented with one other group.

Crilley said they submitted a lot of different proposals because they were told how competitive it is to get a presentation approved.

“We never thought they would all get accepted,” she said.

“We picked things we were doing new at school,” Cunningham said, explaining how they chose their different topics.

“We looked at things that were successful in our building,” Crilley added.

Most of those sessions were “poster sessions,” an informal time in which educators set up booths to talk about specific educational or technological concepts from teaching methods to professional development. Other educators then mill around a room to talk with the presenters at the booths that interest them.

“We love sharing and we love talking to people,” Crilley said, adding that she learned a lot from those who came to their booth to learn from them.

She said that all the responses to their presentations were positive, but they varied greatly. Some people had never heard of the different programs they were talking about, while others just wanted to learn how to implement them in unique ways.

“It fosters such different conversations,” she said.

Crilley and Cunningham are experienced ISTE attendees. This year was the fourth time Cunningham has been able to attend the conference, and Crilley’s third time.

“Every year, there’s something new,” Cunningham said, adding that each time she tries to leave with “a couple good takeaways” to use at her school.

“You get to talk to people,” Crilley said. “It’s about the conversations you have.”

The pair said having a few years under their belts helped them enjoy the conference more this year.

“You know what you’re looking for,” Cunningham said.

Cunningham and Crilley said they were excited that the district was able to bring so many teachers this year.

“It’s really valuable for the teachers to come,” Crilley said.

“It builds that team,” Cunningham said.

The women added that being teachers allows them to be the ones to take new ideas back to their schools, creating a change from the bottom up.