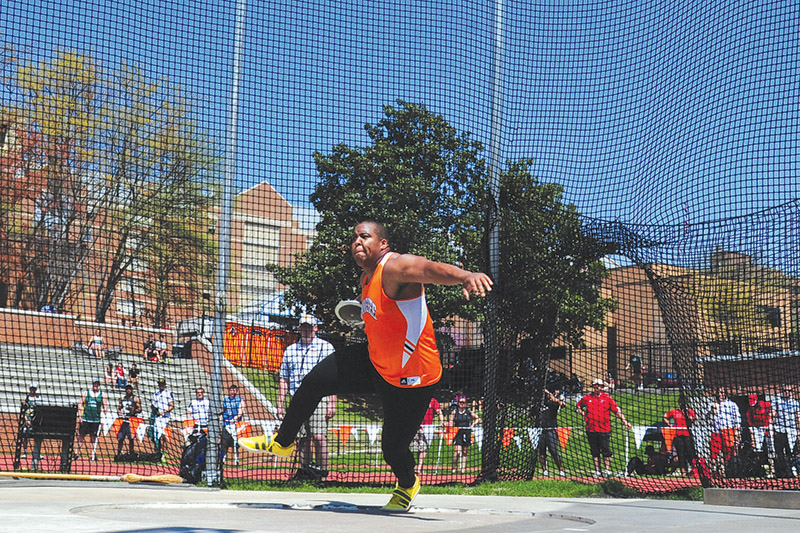 Photo by Matthew S. DeMaria/Tennessee Athletics Tavis Bailey, a graduate of A.L. Brown High, throws in April 2014 during the Tennessee Relays in Knoxville, Tenn. Bailey finished second in the discus in the NCAA track and field championships and placed fifth at the USATF Outdoor Championships in Eugene, Ore.

There’s been an endless line of people congratulating Tavis Bailey on finishing second in the discus throw in the NCAA National Championships.
Bailey, a graduate of A.L. Brown High and the University of Tennessee, shakes hands, accepts pats on the back and smiles, but on the inside, the 6-foot-3, 300-pound behemoth is still crying.
“I’m the national runner-up, and I should be so happy,” Bailey said in a phone interview. “But I came so close. I led the entire competition. The last possible person who had any chance to beat me, beat me.”
Bailey, a graduate student, was competing in his last meet as a Tennessee Volunteer. It was June 12 in Eugene, Ore., at Hayward Field. Bailey already had placed third for All-America honors in 2014, and he had a plan going in.
“We had a progression of throws in mind,” Bailey said. “Get a good, solid mark the first two throws — and then swing for the fences.”
Bailey also qualified for the nationals in the shot put. That early competition got him loosened up for the discus — his specialty.
“But my discus warmups were rough because of crazy wind,” said Bailey. “There was wind that would stand you up. They were running the sprints (100 and 200 meters) at the same time we were throwing the discus and they were running absurd times with the wind.”
The sprints had another impact.
“The sprints are the marquee events and that meant Hayward Field was sold out when we were competing,” Bailey said. “The crowd was awesome. The stadium was loud.”
The second of Bailey’s six flings proved better than just a safe throw. His mark was 203 feet, 2 inches, not his best — he’s thrown 211 feet, 7 inches — but a solid heave.
That throw put Bailey on top.
“I’m thinking, ‘Holy smokes, I’m in first place,'” Bailey said. “I’m thinking if nothing strange happens, I’m going to be national champion.”
Bailey’s fifth throw — a swing for the fences — changed the karma.
“That was the throw I’d been looking for and waiting for all season,” Bailey said. “It felt perfect. That throw was way out there, maybe 65 meters (roughly 213 feet). The crowd was screaming, and I was punching the air — and then I saw an official with a red flag.”
The meet halted as coaches protested. Video was consulted. The foul ruling was upheld.
“I still honestly don’t believe I fouled,” Bailey said. “I still don’t know where the foul was. But after that disappointment, I could feel it coming. Someone was going to pass me.”
On the final round, Penn thrower Sam Mattis, whose best mark had been 2 inches behind Bailey, delivered the throw of 205 feet that made him national champ. Bailey slipped to second place, and then he fouled on his final throw.
“I was bummed out a few minutes,” Bailey said. “But then you start thinking about how far you’ve come to be national runner-up. Seems like yesterday I was sitting in Morgan Hall (at Lenoir-Rhyne) and staring out at the football field.”
Bailey’s silver medal is quite an achievement for a guy who left Kannapolis to play Division II football as an offensive lineman at Lenoir-Rhyne.
“I’m a football guy who became a track guy,” Bailey said with a laugh.
Bailey returned to Oregon to compete in the USA Track and Field Championships shortly after his near-miss in the NCAA Championships. He finished fifth in a field with older competitors.
“I was second among the collegians,” Bailey said. “It was my first competition that wasn’t for Tennessee, but Tennessee still flew me out there, and it wasn’t an inexpensive trip. I guess it was Tennessee’s way of saying thank you.”
The 23-year-old Bailey has moved on to his post-college life. He has an office job that pays the bills. He’s still living in Knoxville, and he’ll finish work on a masters degree in December.
Bailey plans to resume training as a discus specialist in September and says he is a “Vol for life.” His school’s coaches, nutritionists, weight room and track will always be there for him. It’s still possible for the world to see “USA” across Bailey’s thick chest in international meets down the road.
He’s a long way from giving up his dreams.
“The sprints and jumps are a young man’s game,” Bailey said. “But the throws are an old man’s game, and I’ll get stronger and smarter for years to come.”