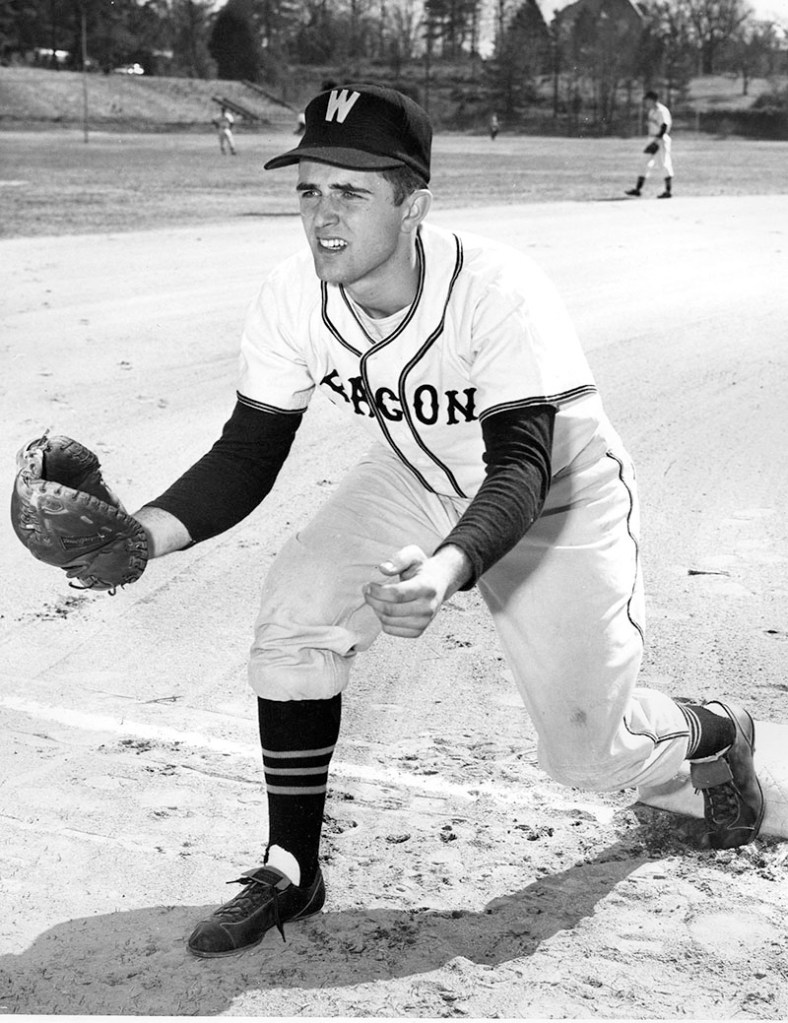 Salisbury Post file Bob Waggoner, a Salisbury native, shown during his playing days at Wake Forest. Waggoner and the Demon Deacons won the 1955 College World Series and, until Virginia captured the title last week, were the most-recent team from the ACC to win an NCAA baseball national championship.

Watching on television from his home in Charlotte, Bob Waggoner not only didn’t mind seeing Virginia win the College World Series, he was cheering for the Cavaliers.
“Virginia is one of the old-timey ACC teams,” Waggoner said. “That was important for me — and really important for my wife. We were glad to see Virginia win.”
Waggoner, a Salisbury native, was the first baseman for the 1955 Wake Forest team that won the College World Series in Omaha. Since then, he and teammates, including Landis’ Billy Ray Barnes and Salisbury’s Frank McRae, have been waiting for another ACC team to get the job done.
“UNC should have done it a few times,” Waggoner said. “They screwed it up.”
Virginia finally ended the ACC’s title drought after 60 seasons.
“Exactly 60 years, one week and one day,” Waggoner said. “We won on June 16. Virginia won on June 24. I was 21 when we won, and I’m 81 now, and I’d say that’s long enough. Sixty years is way out of the ordinary. I can’t speak for Bill or Frank, but I’m sure they were as happy as me to see Virginia win. It doesn’t take away from what we did. We’ll always be the first ACC team to win a national championship and the first North Carolina team.”
Waggoner, Barnes and McRae were among the honorees when Wake Forest recognized the 1955 team in ceremonies prior to a game against N.C. State during the recent baseball season.
“We told lots of war stories and they gave us these beautiful, polished black bats,” Waggoner said.
Waggoner and McRae graduated from Salisbury’s Boyden High in 1952. Their coach was Joe Ferebee.
“Frank and I were the No. 3 and No. 4 hitters and we were supposed to win the state championship our senior year, but we didn’t,” Waggoner said. “We played for coach Ferebee in Legion ball too. Billy (Barnes) played for Kannapolis.”
Waggoner had a roundabout journey to Wake Forest.
He wasn’t a great student in high school and didn’t think he had the grades for college. This was years before Major League Baseball instituted a draft, but a Cincinnati Reds scout liked Waggoner and invited him to Cincinnati’s Crosley Field for a tryout along with a pitcher from Charlotte.
“The New York Giants were in town for a series, and I got to meet Bobby Thomson and Whitey Lockman,” Waggoner said. “And I got to hit a few balls out of Crosley Field in batting practice. But when I saw the Reds first baseman — 6-foot-2, 225-pound Ted Kluszewski — I knew I wouldn’t make the big leagues.”
Waggoner was playing ball for a mill team in Cooleemee when Wake Forest baseball coach Taylor Sanford spotted him. Waggoner enrolled at Wake Forest. He turned out to be a better student than he thought, and he played on a national championship team with stars such as McRae and Barnes, two of the ACC’s best.
The ACC was formed in 1953 with Wake Forest and Virginia among the charter members.
Waggoner pointed out similarities between Wake Forest’s run in 1955 and Virginia’s six decades later.
“Both teams overcame hardships and injuries,” Waggoner said. “We lost a captain (right fielder Tommy Cole) in the first game in Omaha and our ace pitcher (Lefty Davis) only got to pitch one game.”
Vanderbilt had three first-round draft picks and beat Virginia 5-1 early in the World Series. But the Cavaliers came back to beat Commodores twice, following the blueprint of the 1955 Wake Forest team.
“Western Michigan beat us 9-0,” Waggoner said. “We had to come back and beat them twice to win the championship, but we did.”
Wake Forest eliminated Oklahoma A&M and pitcher Tom Borland, considered the nation’s top hurler, with a 2-0 victory in the semifinal to get to the title game against Western Michigan. The Demon Deacons beat Western Michigan once and then exacted their revenge in the decisive game with a 7-6 win.
“Billy and Frank were great and they came through in grand style in Omaha,” Waggoner said. “Frank was 5-for-5 hitting in the championship game, but he also made a diving catch on a sinking line drive in the eighth inning when we were leading by one run. Frank preserved our lead.”
1955 remains the biggest year of Waggoner’s life. Mostly because he got married in December of that year, but also for the parade they threw for the team when it returned in triumph from Omaha.
“I was in ROTC at Wake Forest, and not long after that parade I was headed to Fort Benning, Georgia, for six weeks of training,” Waggoner said.
Waggoner remembers Georgia — rattlesnakes, lightning strikes and a sergeant that scared the daylights out of him.
In 1956, Waggoner was commissioned as an officer, and he served in the military 30 years. Baseball led to his education and the service, and the game remains part of him. He slid home with the only run when Wake Forest beat Colgate 1-0 in Omaha — and that’s the sort of memory that never fades.
“What I like best about Virginia winning is they came out of nowhere with no one expecting it,” Waggoner said. “Sixty years ago, we did the same thing.”