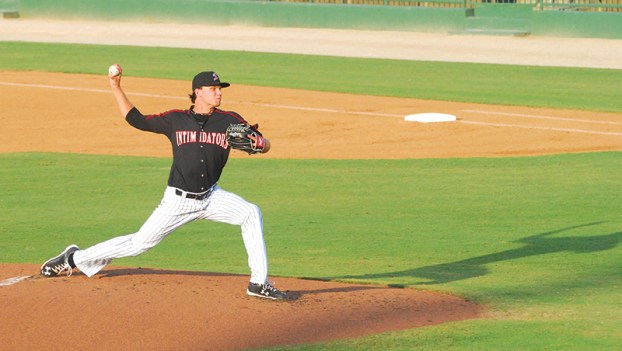 KANNAPOLIS —  Spencer Adams seems to be coming of age as a professional baseball pitcher, and that is good news for the Kannapolis Intimidators and the Chicago White Sox.

Adams, a 19-year-old right hander, enjoyed his best outing of the season Tuesday night with seven strong innings and a 7-3 win over the West Virginia Power. After giving up a run on two hits in the first, Adams settled in with a 91-pitch effort with four strikeouts to improve to 4-4 on the season.

Of equal importance, the strong effort by Adams and a suddenly resurgent offense snapped a four-game losing streak for the Intimidators (37-38, 2-4 in second half).

West Virginia lost its first game of the second half of the South Atlantic League season, but it still has an impressive record at 5-1 since the break and 42-33 overall.

“Overall, it probably was my best effort,” said Adams, a second-round 2014 draft pick out of Georgia. “I mixed my pitches and used my change-up more as the game went along. It was just a matter of me getting more comfortable out there.”

Intimidator catcher Brett Austin, who led he offense with a 3-for-4 game and three RBIs including a long homer to right in the decisive fifth inning, felt Adams was at his best as well in the contest.

“That was his best outing all season,” Austin said, “He executed all of the pitches tonight, and his slider was his plus pitch. He is just getting better.”

Austin noted he had been in a hitting slump in recent games so he had been taking extra practice with coach Robert Sasser.

“We worked on the mental side of it, the approach and hitting to your strength,” Austin said. “I just took my work over to the game tonight, and it worked out.”

With his team trailing 2-1 in the bottom of the fifth, Austin led off with a line shot to right center off Power starter Colten Brewer. It was his third homer of the season. Ryan Leonards followed with a one-out single then John Ziznewski gave the Intmidators a 3-2 lead, their first of the night, with a booming double off the wall in right.

Eddie Alvarez added a sacrifice fly to up the score to 4-2 in the inning.

“I was just being aggressive early in the count and hit the fastball when I see it,” Ziznewski said. “I was able to put a good swing on it and the ball carried.”

Kannapolis made it 5-2 in the sixth on Austin’s RBI single. West Virginia then pushed across a run in the eighth off reliever David Trexler, but he notched a key strikeout to hold the lead at 5-3.

In the ninth the Intimidators iced the win with two more runs as Nick Basto brought one in with a double to left then Austin capped his stellar effort with an RBI single to right to make it 7-3. Matt Cooper closed it out with a strong ninth inning on the mound.

The Intimidators have three more games at home this week with the Power as part of their nine-game homestand. Wednesday’s game starts at 7:05 p.m.