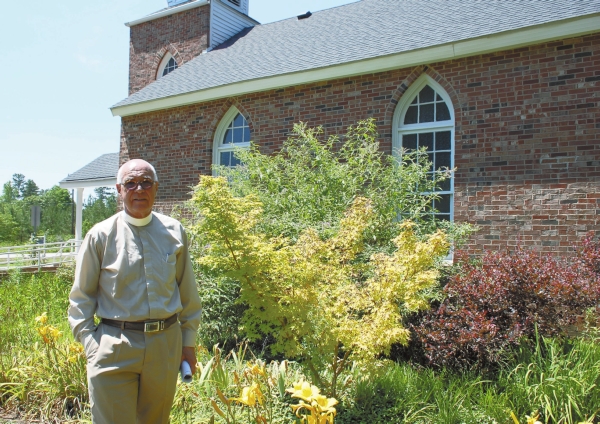 MOORESVILLE — As he sits on the tailgate of an old pickup and looks back over his life in ministry, Father Ramon Aymerich seems far removed from places such as Cuba, Buffalo, Miami and Rome.

Since last fall, he has been serving as a supply priest for St. James Episcopal Church, a tiny congregation off Shinnville Road that still meets in its 1856 structure. Upwards of 30-plus people show up every Sunday, and “they love Father Ramon,” Junior Warden Arlene Hayes says.

“Everybody says, ‘Where did you find him?’ and ‘We love him.’ I knew the minute I talked to him it was going to be good.”

Aymerich says he just tries to be himself, and he acknowledges that has gotten him into trouble sometimes. He would rather be considered a brother, not a father, and hasn’t always been comfortable with “father” as his title.

For him, the Eucharist is not a sacrifice, it’s a meal, even a party — a gathering to learn and empower each other to go forward. He says his ministerial approach has worked out well here, at St. James Episcopal, “because these are people who are not pretentious.”

“What you see is what you get,” he adds.

Most of Aymerich’s sermons have roots in his own experiences, and he finds satisfaction when a parishioner walks up to him afterward and says, “You must have been thinking about me.”

“He is one of the most interesting people I have ever met,” says Bette Barber, a visitor to St. James from her home church in Cleveland, “and what he has accomplished is amazing.”

Aymerich, who will turn 67 this week, was the oldest of four siblings, and he spent his early childhood on a Cuban island called the Isle of Pines. It was located south of the main island where Havana is, and when the Fidel Castro government took over, the name changed to Isle of Youth.

It was an island to explore from one end to the other on foot, and it had three small towns. At one time, Aymerich says, there was a substantial American population — expatriates who stayed behind after the Spanish-American War. In fact, he had a neighbor who was an older gentleman from the United States.

The island’s main industries dealt with shipping, pine trees and citrus fruit. Cuba’s largest prison also was on the island, and Aymerich’s father became a teacher/principal at the prison’s school. Part of his compensation was having a home in which to live.

Aymerich remembers some of his early baby-sitters included “low-level criminals” from the prison. When his parents met, his father was studying to be a priest; his mother, a nun. Their romance and marriage derailed those plans, of course, but Aymerich says Catholicism became part of his DNA.

“It was just a natural thing, part of who we were,” he adds. “They were pretty good models for us.”

With Castro’s rise to power, his father’s political beliefs didn’t match the government’s. His father was thrown into the same prison at which he had been a school official five different times. He refused to cooperate with the new government policies and the effect they were having on education overall.

Aymerich’s parents were concerned their oldest son was not far away from being eligible for Castro’s “voluntary” military service at age 14. Shortly before Ramon’s 13th birthday, his parents arranged with a friend in Miami for Ramon to be a passenger in a ship bound for the U.S. mainland.

“I basically left in the last boat,” Aymerich says. He sailed away from his entire family in July 1961. The friend met his boat in West Palm Beach, Fla., and arrangements were made for Aymerich to attend a boarding school in Puerto Rico.

The boarding school was run by German-American Benedictine monks, and the school’s language of choice was English. Needless to say, it was a big cultural and social transition for Aymerich, but he shrugs his shoulders and says, “You picked it up.”

He remembers his first SRA reading class as a seventh-grader and how he recognized only one word — “elephant” — in 45 minutes.

The monks, led by Father Burton and Brother Felix, were tough, and they could never get away today with some of the disciplinary measures enforced then, Aymerich says. But looking back, he thinks the boarding school taught him some personal focus that served him well later.

All the while, Aymerich did not hear from his family. His father knew a lot of priests, who networked and gave him reports back in Cuba on his son’s well-being.

By the end of the eighth grade, it was obvious to Aymerich and everybody who knew him that he wanted to be a priest. Soon, plans were made to send him from Puerto Rico to Buffalo, N.Y., and enroll him in a 12-year minor and major seminary program that would lead to his becoming ordained as a Catholic priest Aug. 15, 1975.

He started the seminary program as a high school freshman in September 1963. In all, 107 boys started in the program. A dozen years later, only Aymerich and four others had seen it through to the end.

Aymerich still remembers something Ralph Miller, rector of the seminary, told the freshman class. He said, “Boys, remember, there is no vacation from your vocation.”

While others in the seminary program could go home on weekends and holidays, Aymerich had to stay at the school because there was no home to which he could go, unless a classmate invited him.

Ramon and his family finally reunited in February 1966 in Buffalo. They had been able to leave Cuba, landed in Miami and, with the help of friends, made it to Buffalo.

Aymerich still recalls the silhouette of their plane flying in during a blizzard.

He says his mother, who will be 93 this week and often accompanies him to St. James Episcopal, still lives with the guilt of putting him on the ship alone when he was 12. But her courage came from her father, Aymerich says. When he was 16, he renounced his allegiance to the czar and fled Russian-occupied Poland. “In our family, our mother was the tough one,” Ramon says. “She’s had to put up with a lot.”

His father was a great balance in the marriage. Of the two, he probably was gentler, kinder and more sensitive. When Aymerich spent the last four years of his seminary program in Rome, it was his father who wrote him every week without fail, except for once when he had an issue with his gall bladder.

The family members who joined him in Buffalo included his parents, sister, two brothers and maternal grandmother. His grandmother died within a month of her arrival in Buffalo.

People connected with the seminary collected furniture and found a place for the Aymeriches to live on the west side of the city. The first job his father had was shoveling snow for the Catholic churches in downtown Buffalo.

Aymerich’s dad had trouble with English at first. Early on, he would always go to a diner at lunch and order a cup of coffee and a doughnut because they were the only menu items he was sure of saying correctly.

The diner’s owner gave him instructions on how to  say “hamburger” and Coca-Cola” and encouraged him to make that order the next day. The next lunch rolled around, but the owner wasn’t at the diner. Aymerich’s father said, “Hamburger” and Coca-Cola,” and the waiter asked him how he wanted the hamburger cooked, — rare, medium or well-done.

Aymerich’s father was not ready for that question, and all he could answer was “Coffee, doughnut.” Both of his parents ended up learning and speaking English quite well. His father eventually was able to return to teaching. “People loved him,” Aymerich says.

His mother became a hospital cook in Buffalo.

“I know I still have an accent,” Aymerich says of himself. “That’s just the way it is. I’m Spanglish, just like a lot of people in Miami.”

During his first summer at seminary before his family made it to Buffalo, Aymerich fudged on his age and was able to get a job washing dishes at Sleepy Hollow Country Club in Tarrytown, N.Y.

Mondays were his days off, and as a 15-year-old, he would go exploring the city of New York on his own.

After his parents arrived, he was able to work several summers in a Wonder Bread plant in Buffalo.

His last four years as a seminary student in Rome had a dramatic impact on him. He traveled extensively and learned Italian, because the courses were taught in Italian. His first summer he worked as a chaplain’s assistant in Heidelberg, Germany. The second summer after his studies in Rome he returned home to work at the Wonder Bread plant. The third summer, he was a chaplain’s assistant in northern Italy.

Thanks to the Polish connection to his maternal grandfather, a friend invited Aymerich to meet the archbishop of Poland and, with him, Cardinal Karol Jozef Wojtyla, who would become Pope John Paul II, the first non-Italian pope in more than 400 years.

Aymerich has a 1974 photograph of himself in Rome at the same table with Cardinal Wojtyla.

After being ordained in 1975, Aymerich worked out a schedule where he could serve Catholic churches in Buffalo and begin a 24-year career as a chaplain in the Air Force Reserves, serving first at the Niagara Falls Air Force Base.

A turning point in his priesthood came in 1982 when he decided to leave the Catholic Church, feeling uncomfortable with several things, including those related to Catholic views on marriage and divorce.

“I was in trouble all the time,” Aymerich says, adding he was constantly being reprimanded for some of his opinions. He describes it as a gut-wrenching moment, for a man who virtually came out of the womb wearing  a collar, when he had to tell the bishop in Buffalo he was leaving. His official excommunication came in a one-page letter in October 1982.

“I’ve saved that letter,” he says.

That same year, Aymerich began his quick path toward becoming an Episcopal priest. He would soon be going to Reading, Pa., and serving a congregation with a large Latino population.

It would be the first of  many instances in the coming years when he would be involved with bilingual congregations — establishing those churches and/or growing them. One of Aymerich’s more satisfying stops was a 12-year stint in Miami, taking over a beleaguered congregation in Little Havana and helping it prosper.

His later career would take him to Lowell, Mass., where he officially retired, and Newark, N.J., before he moved to Matthews, N.C. — halfway between friends and family in New York and Miami — in late 2010.

Besides St. James, his stops as a supply priest on Sundays have included Bessemer City and Christ Episcopal Church in Cleveland. On Sundays, his mother usually accompanies him to St. James Episcopal. She has been living with him since Aymerich’s father died in 1999.

Aymerich, who is recovering from a hip replacement in April, hopes to “live to an age where I can still enjoy life.” He travels a lot and hopes to continue that — a trip to Morocco is planned in the near future.

He says it’s not unusual for him to strike up conversations on planes, and toward the end of the talks, he usually asks the other person what he or she thinks he does for a living. A priest is the last thing guessed.

“I take that as a compliment,” Aymerich says. “… I’m no better than anyone else.”