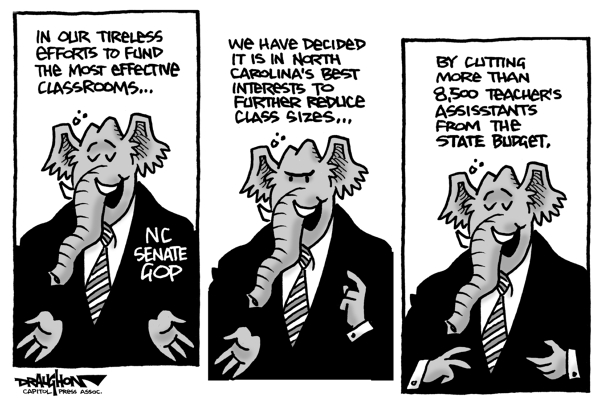 Keep your eye on the N.C. General Assembly. Members are monkeying with taxes again, and you could soon face new sales tax charges where they haven’t existed before — such as at the vet’s office or auto repair shop.

Technically, today is supposed to begin the state’s new budget year, but the House and Senate are so far apart on appropriations that they had to pass a stop-gap measure Tuesday to extend the budget deadline to Aug. 14. That’s not unusual in North Carolina.

What is unusual is the breadth of sales tax increases the state Senate has in mind to accommodate further cuts in business and personal income taxes. It’s up to each taxpayer to figure out if you would come out ahead. The 2013 tax changes approved by the legislature did not work out so well for some.

In the Senate’s proposed budget, the state would start charging sales tax on services — such as advertising, auto repair, pet grooming and veterinarian services — and do away with the sales tax exemption for large nonprofits such as hospitals.

Senate leaders want to cut the personal income tax rate from 5.75 percent to 5.5 percent, beginning next year, and cap itemized deductions at $20,000, including charitable contributions.

Plenty of people are unhappy with these proposals. Nonprofits would take two hits, paying more sales taxes and losing some donations because of the cap on deductions. Veterinarians are mobilizing their clients to fight off this increase in the bills they’ll pay to have their animals treated.

North Carolinians already pay more sales tax per capita than neighboring Virginia and South Carolina, according to the Tax Foundation. And outsiders are beginning to cool to the state’s business climate, according to a CNBC ranking, America’s Top States for Business. The state fell from fifth to ninth in its overall ranking because it “lags in education,” CNBC reported.

Speaking of education, taxes are not the only area of concern in pending budget plans. In education, the Senate budget cuts out teachers assistants completely in order to hire teachers to reduce class size. The Senate also allots considerably less for economic incentives than the House.

Rowan County is represented by four lawmakers in Raleigh —  state Sens. Andrew Brock of Mocksville and Tom McInnis of Rockingham and state Reps. Carl Ford of China Grove and Harry Warren of Salisbury. They can all be reached through the legislative switchboard at 919-733-4111. More detailed contact information is available online at www.ncleg.net. If you have concerns about increased sales taxes or other aspects of the state budget, let them know.

Editorial: On edge after Charleston

Sunday’s demonstration over the Confederate flag and the counter-demonstrations that followed show how on-edge people are in the wake of... read more