She’s our little girl: After six years, adoption goes through for Blake family 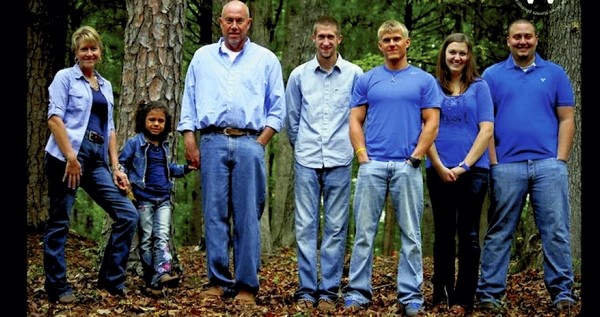 On a beautiful summer afternoon in August 2006, Bob and Deona Blake were married in the front yard of their Salisbury home. She wore a yellow sundress. He wore a cornflower blue polo shirt and khaki shorts. Their four teenagers — her two sons, his son and daughter — stood in attendance.

Soon they’d be empty-nesters, and Bob and Deona dreamed of traveling together, just the two of them.

Soon after the baby turned a year old, Bob and Deona came to the realization that her birth mother, one of Deona’s family members, was in trouble.

“Marion was in a situation that her biological parents could not take care of her,” says Deona, now 48.

Early in their relationship, Deona had asked Bob, now 55, if he wanted more kids. His answer was a firm “no.”

But Deona knew that someone in her family was going to have to take Marion. After much thought and prayer, she finally broached the topic with Bob.

“What do you want to do?” she asked him.

“At this point,” Bob says, “we had four kids living at home. I added a bedroom and a family room.”

Before that, Bob and Deona called a family meeting. Their children are Wesley McVay, 26, Kayla Blake, 25, Corey McVay, 23, and Tyler Blake, 21.

“They were all super excited,” Bob says. “They were great babysitters. They wanted to take her places and stay up late and eat ice cream.”

Bob and Deona had to rein them in just a bit sometimes.

“I was thrilled,” Kayla remembers. “I always wanted a little sister and I got a mini me. Everybody seemed to be pretty excited.”

Of Marion, she says, “I love her to pieces. She gets her sass from the fact that her siblings are so much older. She’s such a sweet girl. She’s our little girl.”

There’s a certain look Bob gets when he hears something that he thinks is completely ridiculous.

Like whether the fact that Marion is biracial made any difference to him.

And that’s about all he says.

“We teach at one of the most diverse high schools in Rowan County,” Bob says of West Rowan. “I’ve been teaching school for 31 years. We see kids.”

“We don’t see color,” says Deona, who works in the front office.

There have been a couple of occasions when it’s been pointed out to him. He won’t ever return to one Salisbury restaurant, because he and Marion were treated so rudely there.

“And there was one incident at a ballgame where a kid made a comment,” Deona says. “Bob just stared him down.”

He nearly lost his temper.

And they do travel, he says. Disney World. Texas. West Virginia. The Virginia Creeper Trail.

They take Marion right along.

“She is just a great traveler,” Deona says.

Marion knows who her birth mother is, and she has a relationship with her, Deona says. “We have discussed adoption and what it means. A boy at her school said, ‘You don’t have a mother.’ And I told her, ‘Ha! The joke is on him! You have two moms.’”

At a restaurant one day, Bob showed Marion a quote, “Adopted children don’t grow in your belly, but in your heart.”

“Marion just loved that,” he says.

“Marion does well when you give her lots of details,” Deona says.

When she was younger, she was terrified of strangers. Now, her mom says, she’s the exact opposite.

“If we take her to a football game, we have to watch her, because she’ll take off,” Bob says. “She knows half the people there.”

She loves going to church. When Deona announced to their church family that the adoption had gone through, they cheered, Bob says.

She’s blossoming in school. Second grade, Deona says, was Marion’s year. Her confidence soared after she received some tutoring in reading.

“She’s right where she needs to be,” Deona says of Marion’s reading level. “She’s very proud of herself. She is a people pleaser.”

Bob and Deona have noticed that children seem to be overscheduled these days. Not Marion.

“We do one thing at a time,” Deona says.

“We had four kids,” Bob says. “You can’t overschedule with four.”

She tried dance, Bob says. Not her thing. She tried gymnastics. Not a fan.

But she’s fallen in love with horseback riding.

And since she’s grown up at Pines Pool, where her mom is the longtime manager, she’s quite the swimmer, too.

She loves her iPad. She loves Disney movies. She loves going to Maw Maw and Paw Paw’s house — her grandparents are Billy and Phyllis Strawn.

“The day after she was adopted,” Bob says, “she went to Maw Maw’s house, and they had steak for breakfast.”

Bob and Deona plan a “Gotcha” party for Marion in July, to celebrate the fact that she’s officially theirs, following an adoption process that took nearly seven years.

“We had people to come to court for us, and people who were praying for us,” Deona says, and she and Bob want to thank all those folks.

People surely notice Marion’s beautiful brown skin, but they’re most likely to mention her dark curls, or her exemplary manners.

Now 8, Marion says she was about 5 when she understood that Bob and Deona were planning to adopt her. She knew her birth mom was sick, and she knew Deona and Bob “really wanted to take me in.”

“It’s fun to be adopted,” she says. “you have people who love you. It’s just a lot of people in your family. I have friends who have been adopted and who have not been adopted, and it’s really fun to hear their stories.”

At school, she says, “My friends think my parents are gonna be brown like me. But then they see my parents, and I’m guessing they think I’m adopted, and I try to explain it to them.”

Of her mom and dad, she says, “They care for me and they feed me. And they gave me the best room ever.”

A couple of weeks ago, Marion attended Vacation Bible School, and had a ball. One evening, she came home and told her mom the story of Moses. Of how two women found Moses in the basket. That one of the women was his mom, but the other woman, a princess, didn’t know that.

She got every detail right, her mom says.