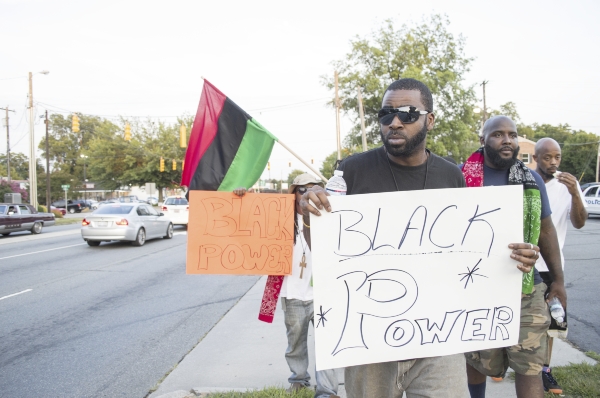 Josh Bergeron / Salisbury Post - A group of marchers walk toward a Confederate statue in downtown Salisbury. One day earlier the statue was the site of a rally in support of the Confederate flag.

One day after a Confederate flag rally, a group of people — chanting and waving a red, black and green flag — marched from the corner of East Innes and Long streets to a Confederate monument in downtown Salisbury Monday evening.

It was the second day in a row the group gathered at East Innes and Long streets to counter the flag rally. Organizers said earlier Monday they’d wait for a permit to assemble publicly again, but the demonstration went on anyway.

“It’s important for our people to see us out here and see that we are standing up for them,” Rankin said. “They deal with white supremacy everyday. People say the Confederate flag is about heritage, but when I see that flag, I see slavery.”

He said Monday’s march would be one of a series of gatherings the group would have.

Rankin described the symbolism of each of the colors that marked the flag and bandanas worn by the group. Red stands for blood shed by blacks in the fight for equality, black stands for black people and green stands for land stolen from blacks, Rankin said.

The flag displayed by the group is commonly known as the Pan-African flag. It was adopted by the Universal Negro Improvement Association and African Communities League in 1920. The colors are also part of the flag of several nations around the world.

Multiple members of Monday’s group were hesitant to provide their name, but said the rally and ensuing march wasn’t intended to protest the Confederate flag’s public display during Sunday’s event.

Other members of the group said they weren’t trying to disrespect the Confederate flag or members of society who support its public display.

A debate about the Confederate flag’s place in society erupted following a shooting in Charleston, S.C., where nine churchgoers were shot during a Bible study at a historically black church. A website registered to the alleged shooter Dylann Roof shows pictures of him posing with Confederate memorabilia. South Carolina legislators have considered whether to remove the Confederate battle flag from the capitol grounds. Gov. Pat McCrory, and others across the nation, have called for the flag to be removed from speciality license plates.

Several young children joined the rally at East Innes and Long streets and joined in on the chants.

About 10 members of the group left after two hours and marched toward a statue dedicated to Confederate veterans. The statue was the site of a separate rally on Sunday, where two dozen people waved various forms of Confederate flags. The group used Innes Street as a direct route, and briefly stood on the statue.

Salisbury’s code of ordinances requires a permit for public assemblies. However, Salisbury Police Chief Rory Collins on Monday said all demonstrations were allowed to continue because of their peaceful nature. Collins added that he thought the ordinance was unconstitutional.

Later in the day, Collins said he would start enforcing the permit law.

Teamer said Collins showed poor leadership by not enforcing the city’s ordinance for all of the rallies.

“It’s interesting to me that Chief Collins is determining if he is infringing on people’s rights,” Teamer said. “I didn’t know it was his job to determine what’s constitutional.”

It’s unclear when the next march or rally might occur. Teamer said it’s up to the city of Salisbury’s leaders to quell any racial tensions.