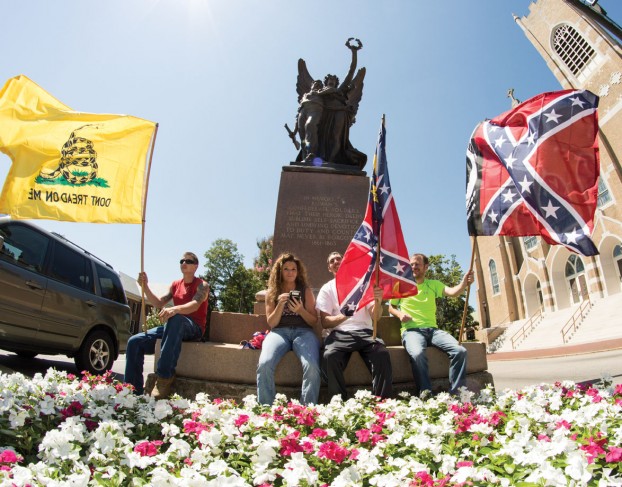 From left: Zach Greene, Christy Burleyson, Jeffery Long and Jack Kluttz wave flags at the base of a Confederate statue in downtown Salisbury on Sunsay. Josh Bergeron/Salisbury Post

Editorial: On edge after Charleston

Sunday’s demonstration over the Confederate flag and the counter-demonstrations that followed show how on-edge people are in the wake of the Charleston church massacre. If we’re not careful, murder suspect Dylann Roof may get his wish: a race war.

The people who gathered around the Confederate monument on West Innes Street are free to display the Confederate flag at their homes and on their cars. They can wear the flag and wave it. But they cannot expect government to display a flag that — despite denial in some corners — has come to symbolize racism in the eyes of African Americans and many others. Fortunately, North Carolina state government relegated the Confederate flag to museums long ago, and it appears South Carolina and other Southern states will soon do the same. Removing the flag from specialty license plates in the state would likewise lift the appearance of government sanction.

The counter-demonstration by African Americans that came together later in the day was, fortunately, several blocks away on East Innes Street. Chief Rory Collins says this gathering drew more police than the first because the department received a call about the gathering, and police treated it as a report of disorderly conduct. After receiving mixed messages from officers about whether they needed a permit, the black demonstrators eventually broke up and went home.

Yet another demonstration took place Monday night, with black protesters marching from East Innes to the Confederate monument, where they climbed up and waved the Black Nationalist flag.

NAACP President Scott Teamer rightly raised questions Monday about enforcement of the permit law. Collins could help ease tensions if he would consistently enforce the city’s law requiring permits for demonstrations — and send a clear message to his officers and the public on this subject. Collins vowed late Monday, after conferring with the city attorney and others, to start enforcing the permit law, but opted to let the spontaneous Monday night demonstration run its course

It would be good for all involved to remember the spirit of peace and unity that came over Charleston after the horrible tragedy of June 17. Hate drove a young white man to open fire on nine people gathered for a Bible lesson at a black church. The people of Charleston vowed to rise above the hate, and the people of Rowan County can do the same. We have serious issues to work on. Staging demonstrations that inflame passions does nothing to promote understanding and everything to sow seeds of trouble. We must do better than that.

Editorial: Faith in us, the U.S.

The Fourth of July week in Faith starts at 5 p.m. today at Faith Baptist Church with the 50-voice Fourth... read more