In Challenger Game, everyone is an MVP 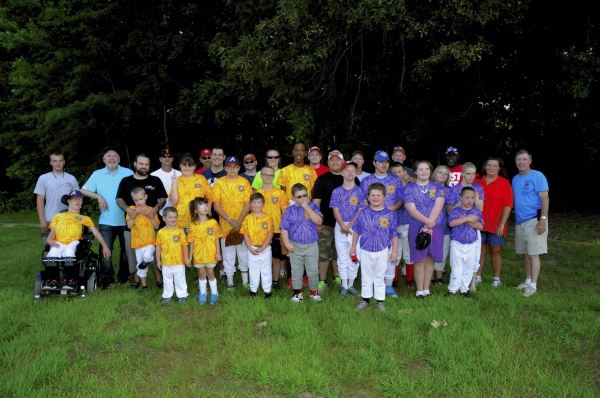 Participants in the 2015 Challenger Game

When you hear the phrase “Let’s play ball,” you generally know a baseball or softball game is under way. You smell the ball-game favorites such as popcorn and hot dogs, while hearing fans chant their favorite players’ names or cheer in excitment after a double play. When you see the players step to the plate or catch a fly ball, you would never imagine a child with a disability on the diamond.

However, on June 22 Enon Baptist Church held its fifth annuall Challenger Game, whicht displayed a different kind of ball player. These young players, aged 6-15, took their disability and developed the ability, determination and courage to compete in the Challenger Game.

This event was more than just a game for the kids; it was an all-round family day that included a cookout with all the fixings, and photo opportunities to capture the smiles and the spirit of kids who wanted to show off their game face. Before the game started all the players along with their parents and volunteers were escorted to the field for the lineups to be called. These young players competed together on the ball field to bond as one unit despite their medical conditions.

“This game is so rewarding to us. These kids are awesome. Watching them play with so much heart puts a smile on your face,” said Karen Greene, a member of Enon Baptist Church.

To see the bat connect with the ball after they swing with every ounce of their body was truly a magical experience. Then, to see the volunteers and parents assist their player around the bases was a true testament of teamwork.

One player who stood out was little Ms. Savannah, whose legs were strapped with braces. When it was her time to bat she looked down at her legs, took her braces off and stepped to the plate. She quickly won the heart of her volunteer when her second chance to bat came around. She looked up at her volunteer and asked, “Is it my turn to bat again?”

“It’s such a great opportunity to be a volunteer at the Challenger game. You learn so many life lessons. There is no color, or physical imperfections prohibiting them from playing. We all see the big hearts, and great will of all involved,” said Carey Barber, a member of Enon Baptist Church. “A journey around the diamond will last a lifetime in the players and families alike.”

The Challenger Game is dedicated to empowering youth with intellectual disabilities and their families.