American Legion: Rowan gets back in win column 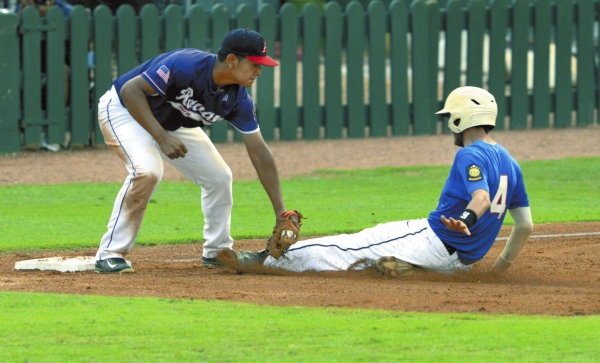 SALISBURY — Good catchers, like good umpires, go unnoticed.
Rowan County catcher Dustin Ritchie hasn’t produced huge numbers like several of his teammates this summer, but he has been as important as anyone in Rowan’s County winning the Area III regular-season title.
Rowan County (17-5, 12-1) beat Mooresville, 6-3, on Monday at Newman Park to finish a game ahead of second-place High Point. Ritchie did what he always does. He had two hits, threw out two runners attempting to steal (one on a pitchout) and steered four Rowan pitchers to a solid night on the mound.
“Ritchie does a lot of good things quietly,” Rowan County coach Jim Gantt said. “He calls a good game, he catches the ball well and throws out runners.”
Ritchie had a role in a nice comeback outing by Rowan right-hander Tyler Scruggs, whose most recent mound appearance was Friday’s two-inning, 50-pitch disaster in the 18-10 win against Concord.
“He said his arm felt good and he wanted to throw strikes,” Ritchie said. “We had an umpire that had a big zone and that helped. We just kept going outside, and then a little further out. If he called a ball, we came back in a little bit.”
Scruggs’ first five pitches were strikes and his confidence soared.
“I couldn’t locate my fastball the last time I pitched,” Scruggs said. “But we’ve been working on some drills — making sure I finish in front of the catcher — and that helped me.”
Scruggs pitched six innings. When he exited, Rowan owned a 6-3 lead. Then a bullpen committee of Noah Jarrett, Omar Bautista and Sawyer Strickland held it.
“Ritchie had Scruggs coming inside when hitters started leaning out over the plate to reach pitches,” Gantt said. “And Scruggs kept the ball down. That was key.”
Mooresville (8-10, 3-8) got a complete-game effort from lefty Tyler Freeland on the mound. Freeland got major assistance from center fielder Chris Adelfio, who made a terrific play to rob Riley Myers of extra bases in the fourth inning. That catch helped keep Mooresville in the game.
“We swung it OK, but we didn’t get the key hits,” Mooresville coach Robert Little said. “And we gave Rowan too many base runners with walks and errors. When you give them extra outs, they’ll get ya.”
Juan Garcia drove in his team-leading 33rd and 34th runs with a first-inning single and a fourth-inning sacrifice fly.
Harrison Baucom knocked in Jeremy Simpson with a triple down the right-field line in the second inning. Heath Mitchem scored from first base in the third inning on a hit-and-run when Ritchie drilled a hit to right field.
“Mitchem put on the turbos,” Ritchie said with a smile. “He was already to second base when the ball fell and then the right fielder over-ran the ball.”
Rowan took a 4-1 lead to the fifth frame. That’s when No. 9 batter Kacey Otto produced Rowan’s biggest hit — a two-out, two-run double into the left-field corner that plated Ritchie and Simpson and pushed the lead to 6-1.
Adelfio’s triple keyed Mooresville’s two-run sixth inning against Scruggs that lifted the visitors within three runs at 6-3.
Rowan’s bullpen allowed a healthy lead to slip away on Sunday against Eastern Randolph, but there was no repeat. Jarrett got two strikeouts in the seventh inning. Bautista got the last out in the seventh and rolled through a 1-2-3 eighth with a handful of pitches against the top of Mooresville’s lineup.
Strickland allowed a single in the ninth inning to Ben Perko, but nailed down his first save with relative ease.
“We didn’t hit the ball well, but we came back with a win after a loss and that’s always important,” Gantt said. “You can go into a losing streak just as easily as you can have a winning streak.”
Rowan won for the third time this season against Mooresville. Earlier games were 8-4 and 2-1.
Rowan has no games scheduled until it plays at home in the second round of the playoffs on July 6. Mooresville plays two on Tuesday to close the regular season — against Greensboro and Eastern Randolph.