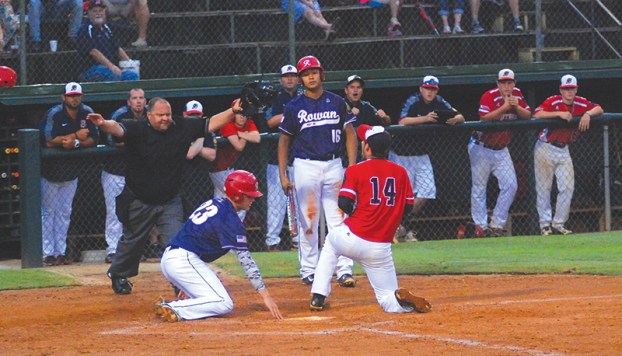 American Rowan Legion: Rowan pounds out 22 hits to back Myers

SALISBURY — Rowan County pitcher Riley Myers threw six innings on Saturday and boosted his record to 4-0 under weird circumstances.
“It was kind of a tough night,” Myers said. “Not only did we have a (45-minute) rain delay at the start, we had some innings that felt like rain delays.”
Myers wasn’t kidding. Rowan County’s eight-run second inning took a while and its 10-run fourth inning took even longer. Rowan wiped out Southern Rowan 22-2 with those two crazy innings.
“There’s not a lot I can say about it,” Southern Rowan coach Ben Hampton said. “We didn’t get a call and we didn’t make a play and that led to the two big innings for them. But the bottom line is Rowan tore the cover off the ball — and we didn’t answer.”
Doing most of the tearing was Hunter Shepherd, the homeschooled first baseman who went 5-for-6. His three-run homer made it 9-2 in the second inning and his two-run double made it 15-2 in the fourth.
Shepherd smashed six homers against high school competition as a junior. Saturday’s ringing blast to right-center was his second of the Legion summer.
“I go up there trying to hit the ball hard, but I never go up there thinking about a homer,” Shepherd said. “Sometimes I’ll hit a home run by mistake, but that’s a good mistake.”
Rowan County won its 14th straight game and clinched the top seed for the Area III playoffs. Rowan will be one of two teams with a first-round bye.
“We’ve had games where we’ve had to put the tarp on the field, so we’ve had practice with situations like we had tonight, and maybe that helped us some,” Rowan County coach Jim Gantt said. “But momentum in baseball stops and starts with that guy on the hill, and Riley was good. He was the difference. Even when we got a big lead, he and (catcher) Dustin Ritchie were still focused and still executing pitches. He wasn’t just laying fastballs in there.”
Myers struck out the side in the top of the fourth. That helped spur Rowan’s 10 runs in the bottom half.
Rowan County leadoff man Harris Baucom went 4-for-5. Jeremy Simpson and Lee Poteat had three hits each.
Rowan out-hit Southern Rowan 22-5 in the most lopsided of the 45 games the programs have played against each other since 1996. Rowan leads the series 37-8 and has won all nine meetings during the last four seasons. Rowan’s 22 runs were the most ever scored in a Rowan-vs.-Southern Rowan game. The previous high was 19.
Southern Rowan sent Dillon Atwell, Dylan Snider, Brandon Newton, Tanner Christy and Blake Johnson to the mound. Rowan piled up hit batsmen (seven of them) as well as base hits.
Noah Jarrett pitched the seventh inning for Rowan County.
Eric Stowe and Shaggy Wyatt had doubles for Southern Rowan. Stowe also made a fine catch in center field in the first inning on a long drive off Heath Mitchem’s bat.
Matt Saul and Wyatt drove in runs in the top of the second inning as Southern Rowan (11-10, 6-6) took a brief 2-1 lead. But then Rowan County (16-4, 11-0) scored 21 unanswered runs in a relentless assault.
“We came out hitting,” Shepherd said. “Even with the delay, we still had a job to do, and everyone was swinging the bats.”
Rowan County is home against Eastern Randolph on Sunday. Shepherd will pitch. Matt Brown will pitch for Southern Rowan in a 4 p.m. game at High Point on Sunday.